What is Project Acoustics

As a reminder, Project Acoustics is a wave-based simulation engine that adds accurate acoustics to your 3D environments, whether it’s a video game or mixed reality experience. We currently offer plugins for Unity and Unreal engines.

Today we’ll walk you through updating one of our demo scenes with Project Acoustics 2.0 features.

Let’s describe the demo scene first. A couple years ago, we scanned a small movie theater and used Project Acoustics to generate acoustics for the scanned geometry. We loaded the acoustics onto a HoloLens 2 and were able to listen to virtual acoustics for sound-emitting holograms while physically walking around the movie theater. See a video of that experience here.

We’ll use that same theater geometry in Unreal Editor to demonstrate some of the new features. The geometry consists of a small, square movie theater filled with seats, an outer hallway, and a doorway connecting the two areas. 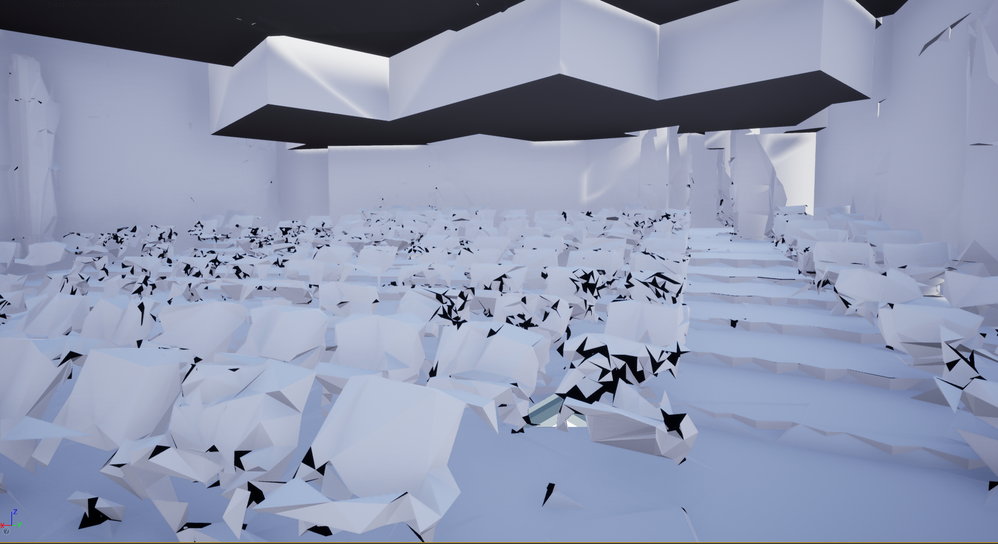 Because the theater can seat lots of people we’ll want more accuracy there, as opposed to the hallway, where less accuracy is desired. Let’s increase the number of probes in the theater room. Probes are simulation points that are placed where the listener can move around. New in PA 2.0, the "Probe Spacing" volume lets you specify how dense you want probes generated for individual regions. More probes equals more accuracy, at the cost of more bake time and dataset size. We’ll add an “Acoustics Probe Volume”, set it to “Probe Spacing”, and set the spacing to 110 cm, or about 3x dense as the default spacing.

The movie theater we scanned had soft chairs and acoustically treated walls, so let’s specify some absorption values for the theater room. The absorption values define how reflective each material in the scene is. Using the new “Material Override” volume, you can set the absorption coefficient for all materials within a volume, instead of manually specifying the values for each material individually. We’ll place a volume over the theater and give the entire theater room a larger coefficient to account for the soft materials. We’ll set a lower absorption coefficient for the hallway to keep it sounding more reflective.

In the scene, there is one doorway that can be walked through. Let’s make the doorway a dynamic opening, so that we can hear dynamic acoustics depending on whether it’s open or closed. We’ll add an “Acoustics Dynamic Opening” component to a door mesh that will cover the door. We’ll leave the door open for the baking process. Once the scene has been baked, each audio source needs to opt-in to query door state, and attenuation values on the dynamic opening need to be modified to simulate the door being open, closed, or partially closed. See this page for more details. Also see the Doors_Gym scene in our Unreal sample package. 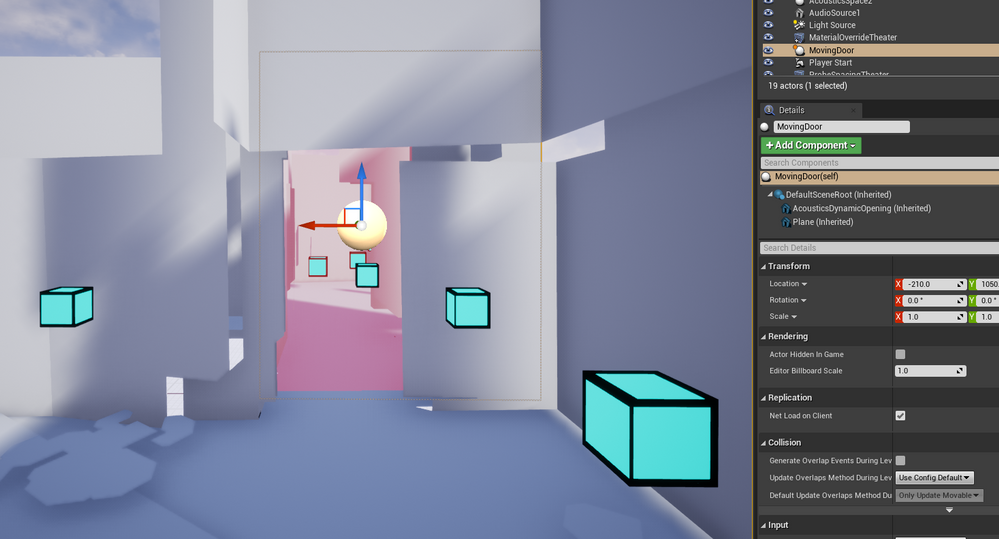 Because the doorway is an important area for us, let’s make sure we have good probe coverage. You can now manually add probes to a scene. Simply drag an “Acoustic Pinned Probe” actor wherever you want in the scene. This is useful if the auto-generated probes didn’t cover every area you wanted. We’ll add a couple probes just inside and outside the door. These probes will be baked just like the rest of the probes.

This demo video contains a sample of how the scene sounds with the new dynamic door. Notice how the direct sound and reverb die away as the door closes.

Thanks for checking out Project Acoustics! We’re eager to hear your feedback on these new features, especially dynamic openings.