This blog post is a contribution from Andy Li, an Escalation Engineer with the SharePoint Developer Support team.

Andy is one of the Escalation Engineer with the SharePoint Developer Support team.  The series of posts on Workflows are his contribution for the community to better understand the internals of workflow runtime and how it interacts with SharePoint.

Almost every workflow requires some sort of user interaction.  For example, your workflow may create a couple of tasks and assign them to a group of users for approval.  When the users got their tasks they will go to the site and submit their feedback and their feedback will be sent back to the workflow for further processing.  There are a lot of actions going on behind the scene after the user submits the task.  One thing we mentioned earlier is that when the user submits the task, an event receiver will respond to that and try to deliver the task changes to the workflow.  We typically refer to this process as event delivery, in workflow runtime this is called Data Exchange.  They all mean the same thing.  In this section, we’ll talk about all the macro-actions that take place during this process.

Workflow Host processes can communicate with workflows by exchanging data through custom local communication services.  These local communication services implement user-defined interfaces that define methods and events that will be passed between the workflow and the host process.  Events are used for sending data to a workflow.  Whereas, methods are used by the workflows to send data to the host application.

The following diagram shows how a local communication service communicates with its host application.  You can read Using Local Services in Workflows for more information. 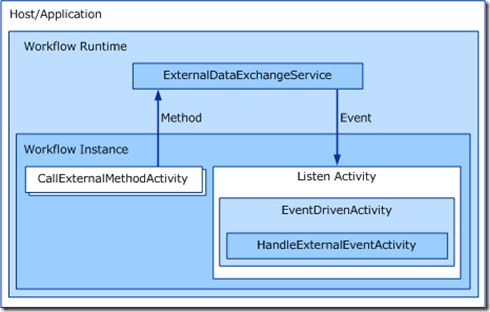 Take a look at the ITaskService definition in ILSpy. 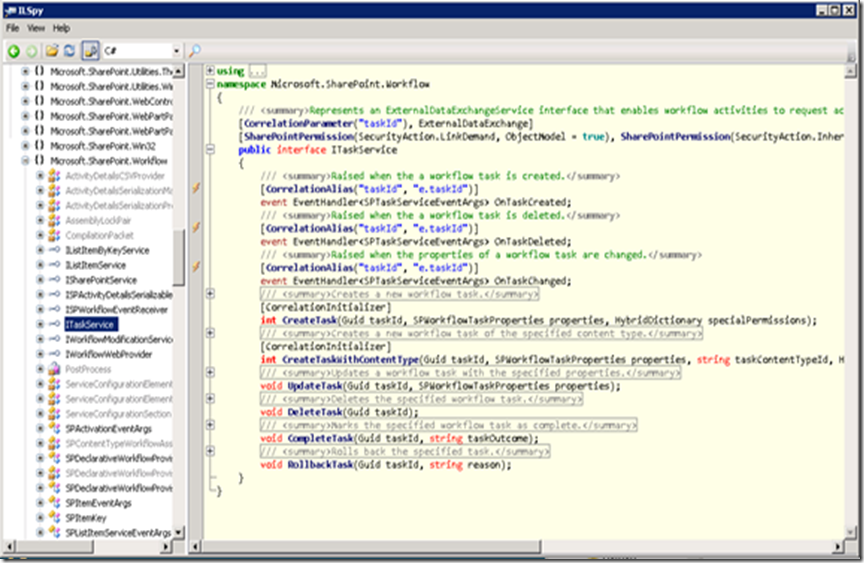 Now, let’s explain how correlation works.  Simply put, correlation parameters are used by workflow runtime to find the correct destination for the event it needs to deliver to.  You may remember that every task activity in SharePoint requires a TaskId parameter (see the screenshot above).  Notice that the CreateTask method has a “CorrelationInitialization”, this is the place you will create a new TaskId and this value will be used for the rest of the activities on the same task.  For example, OnTaskChanged activity.  Later on, when a user submits a change on the task the workflow runtime uses the task to find the OnTaskChanged activity where that event should go to (Remember there can be multiple workflow instances that may have multiple OnTaskChanged activities in the system).

How does correlation work?

CorrelationParameterAttribute defines the identifier for the data exchange conversation.  Each method or event on the interface is then declared with a formal parameter of that name, for example, taskid , as shown in the ITaskService interface example.  You can also use other attributes to describe more complex correlation mapping.

The following screenshot shows properties of a CreateTask activity in Visual Studio.  Notice that we bind the TaskId property to a field in the class called Task1_TaskId1 .  In MethodInvoking (createTask1_Invoking()) we initializes the TaskId with a new GUID. 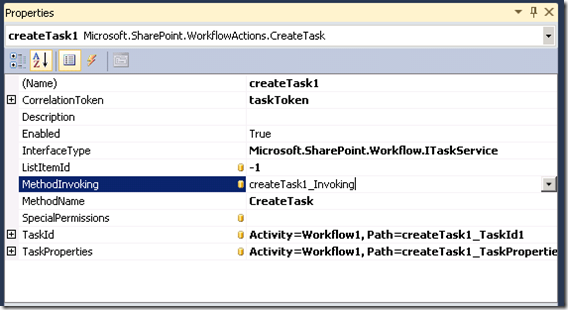 Once the “taskId” in initialized in either CreateTask or CreateTaskWithContentType activity, it will be shared with all the following task activities with the same correlationToken so that they know which task they will be working on.  Then when it comes to OnTaskChanged activity which is listening on ITaskService.OnTaskChanged event, it registers an event sink with the workflow runtime.  Later on, when workflow runtime receives an OnTaskChanged event from the host application (meaning SharePoint process, w3wp or owstimer), it checks taskId value on EventArgs then, route the event to the OnTaskChanged activity that has the same TaskId correlation. 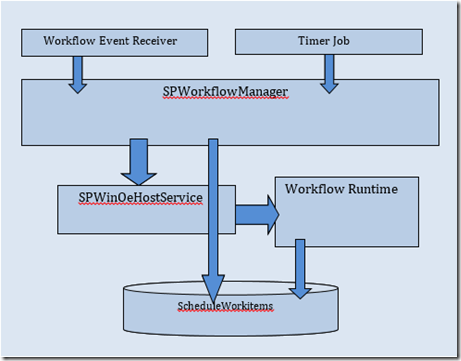 As we mentioned earlier, there are several workflow event receivers that respond to user actions. SPWinOEItemEventReceiver is the one that responds to task and list item event, such as ItemUpdated and ItemDeleted .  These events contains the following information:

- The task or list item that is associated with the event.

- BeforeProperties and AfterProperties on the changed task or list item.

- Event type, this can be ItemAdded, ItemUpdated , ItemDeleted or any kind of events that SharePoint event receiver handles.

The event receiver sends the event data to SPWorkflowManager.

SPWorkflowManager queues the event in content database (ScheduleWorkItem table) as a WorkItem before starting to deliver the event.  This is due to the fact that the event delivery process is a long running process and can fail.  So queuing the event is simply for fail-over purpose.  If it fails to deliver the event, we can always pick up the event later to try to re-deliver it.  We’ll explain how to read this database to troubleshoot issues with delivering workflow events.

If the workflow instance successfully processes the event, we’ll then remove the event from the ScheduleWorkItems table and this marks the ending of the event pipeline. 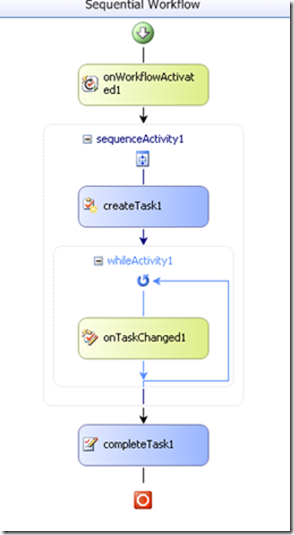 1. The CreateTask activity inherits from CallExternalMethodActivity. This activity is where the data exchange conversation between the workflow instance and SharePoint begins.  TaskId is initialized at this point.

2. Workflow runtime calls the SPWinOeTaskService.CreateTask to create the actual task item.  Remember that an “in-memory” object SPListItem is created for the task and it hasn’t been committed to database yet.  The actual commitment will be done by WorkBatch service right before the workflow is persisted.

3. The next activity on the workflow is OnTaskChanged activity.  Workflow runtime will call Subscription Service, which will setup an event receiver for handling the ItemUpdated event on the task we just created.

4. An event sink is setup with the workflow runtime to respond to the OnTaskChanged event.

6. The user submits the task change through the Task Form.  The Task form is essentially an ASPX page which calls OM to update the task item.  The task form calls SPWorkflowTask.AlterTask() API to commit the changes on the task item.  This fires off the ItemUpdated event on the event receiver that was registered earlier.

NOTE: You may notice that each workflow task item has a special field called “WorkflowVersion”.  The value on this column is set to a value greater than 1 (meaning the task is locked) by SPWorkflowTask.AlterTask() and it indicates that an update has occurred on the task and requires further action by the corresponding workflow instance.  This also means the task will remain as “locked” until the change has been processed by the workflow instance.

Question: If I call AlterTask() API multiple times, I receive an exception saying that the task is currently locked – why?

Ansswer: AlterTask API internally calls SPListItem.Update().  If it determines this task belongs to a running workflow instance, it’ll set the “WorkflowVersion” column to a value greater than ‘1’.  Now, if you are trying to call SPListItem.Update() again, it will check the “WorkflowVersion” column.  If it’s greater than ‘1’, we stop the update and throw this exception.  By this way, we prevent any change on the item before workflow runtime processes the OnTaskChanged event.  Only after the OnTaskChanged activity has been processed by the workflow instance, the “WorkflowVersion” on the item will be reset back to “1”, which means the task is “unlocked”.

7. Now, let’s continue.  The event receiver will respond to the SPListItem.Update() and try to deliver the event to the workflow runtime by calling SPWorkflowManager.RunWorkflow .

8. SPWorkflowManager generates a WorkItem and puts it into content database (enqueuing, ScheduledWorkItems table).  This WorkItem represents the pending work on task’s ItemUpdated event before the workflow instance processes the event we’ll keep a record in the database for fail-over purpose.  If for any reason the event cannot be delivered, the workflow timer job can pick up the WorkItem from the database and continue processing it.

Question: Where is TaskID stored?

Answer: Every workflow task has a column called “GUID”, that’s the TaskID.

10. After workflow runtime finishes executing OnTaskChanged activity, it removes the WorkItem from database.  The “WorkflowVersion” column on the task will be updated to “1” (unlocked) and finally the event receiver is deleted from the task list.

What about Workflow Timer Jobs?

Workflow timer job is responsible to process the queued WorkItems.  In that case, timer service will be the host for the workflow runtime.  There are three timer jobs related to workflow and they have different jobs.  The table below lists their main functions.

In the next part of this post, we’ll discuss Troubleshooting Workflow Issues.