Turn on suggestions
Auto-suggest helps you quickly narrow down your search results by suggesting possible matches as you type.
Showing results for
Show  only  | Search instead for
Did you mean:
Can't access public properties of registered User Controls inside a SharePoint 2013 project
By

This blog post is a contribution from Aaron Miao, an engineer with the SharePoint Developer Support team.

This is not a new issue.  Ronald Widha’s blog post addresses this issue for SharePoint 2010.  But with SharePoint 2012 and Visual Studio 2012 releases, the issue still remains and gets more complicated.

If you create a SharePoint 2013 application page project with Visual Studio 2012 by following the steps below, then drag and drop a user control to your application page Test.aspx, it will generate a mark up shown below.

3. Add an application page called Test.aspx.  Your project will look like this. 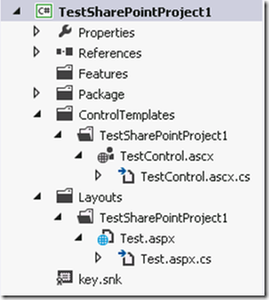 And the mark up

You will run into 2 issues.

First, VS intellisense does not work.

Second, you cannot compile the project because VS 2012 does not recognize the Name property (as seen marked with red waved line).

Casting the user control explicitly could do the trick.  But you do not want to do that every time!

If you check the Test.aspx.designer.cs file, your user control will be declared like this:


The TestControl is declared as base type of System.Web.UI.UserControl.  This is the problem with SharePoint 2013 Visual Studio templates and VS2012.  Look closer at your Test.aspx page, your control is registered like this:
Note that the source is _controltemplates rather than ControlTemplates .  In addition, it has folder called “15”.  This should be mapped to SharePoint 2013 installation 15 hive folder.  However, VS2012 generated project does not even have 15 folder.  You would hope that VS2012 understands what SharePoint 2013 means here.

If you look closer and hover mouse over the Name property, VS2012 does not seem to like your user control registration.

The user control registration does not match the project folder structure.  It’s suggesting that it cannot find the control and decided to put the base System.Web.UI.UserControl in the page designer class (*.ascx.designer.cs).  This is the culprit as to why we cannot get the public properties/methods without explicit casting.

Here’s what we need to do.  Continue the steps of creating the project.

4. Add a new folder to the project called “_controltemplates”.

5. Add a new folder called “15” inside of “_controltemplates” folder.

6. In file explorer, copy all files from “ControlTemplates” to “15” folder.

9. Then you could drag and drop the user control to the application page and starting coding.

As long as you do this, VS2012 behaves properly and casts the user controls to the proper type in designer class (*.ascx.designer.cs).

After all this changes, your project should look like this. 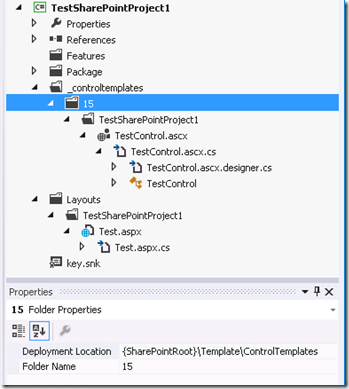 If your project references the site like this: http://yourserverurl/sites/yoursiteurl , it should look like the below. Note that the folder structure matches the site URL. 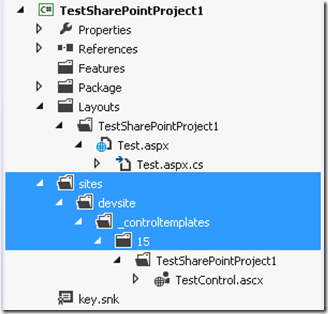