Trying to create a CA policy to target just Android devices, but there seems to be a bug in the settings interface that's preventing it from working.

I'm setting a Device platform condition as follows, only to include Android, and to Exclude none. 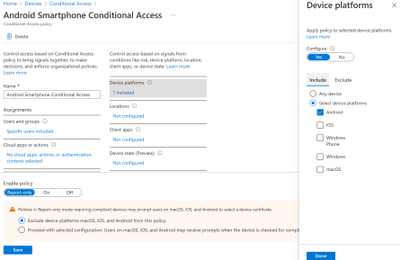 However, after saving the policy and coming back to it, it has altered the settings to exclude additional platforms - including Android - which obviously makes no sense (you can't both include and exclude simultaneously): 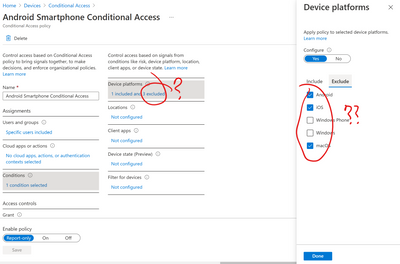 Those excludes were magically added after saving/coming back and I can't seem to get rid of them.

Before I submit a ticket, I would appreciate it if anyone else out there could confirm whether they see this behavior. I'm using MS Edge Chromium, latest stable release, if that matters..

Just did a lot of tests but it seems to be working like it should. What happens when you create a new policy, Or change some other settings in that config.

And maybe try to change the policy from portal.azure.com instead of the endpoint manager?
1 Like
Reply
best response confirmed by Bob Manjoney (Regular Contributor)

I found my problem. When I create policies, I typically start them out in "Report Only" mode, which enables a default choice to exclude Android, iOS and macOS. Completely missed it. Duh! :)

Thats quit funny I wanted to send that screenshot in the first place... but i thought it was so obvious when you get this notification what it does, it couldn't be the issue... :) sometimes the solution is easier than you might think. Thanx for replying back
0 Likes
Reply