Turn on suggestions
Auto-suggest helps you quickly narrow down your search results by suggesting possible matches as you type.
Showing results for
Show  only  | Search instead for
Did you mean:
What’s new for Microsoft Lists - Microsoft Ignite 2021 [Mar.2-4] announcements
By

Microsoft completed rolling out Microsoft Lists in Microsoft 365 and Microsoft Teams last year (2020) – along with the release of Microsoft Lists for iOS earlier this year. We have received a lot of positive feedback and usage is growing fast. Today, we are pleased to share future Lists innovation, as announced at Microsoft Ignite March 2-4, 2021.

Hear from Omar Shahine, VP of Product OneDrive and SharePoint (Microsoft 365), as he talks with @Jeremy Chapman sharing and showing all of the new Lists innovation, in addition to new features and capabilities he and team are working on (the Lists segment starts at 4:45):

Microsoft Lists is a Microsoft 365 app that helps you track information and organize work. Lists are simple, smart, and flexible, so you can stay on top of what matters most to your team. And our engineering team is constantly reviewing feedback and requests, as you’ll see in all the announcements below.

Note: Click on the roadmap ID links per announcements to best track Targeted Release dates and additional information on the public Microsoft 365 roadmap).

Today, we have several ready-made list templates designed to make it easy to get started tracking and managing information – like events, issues, and requests. We’re pleased to announce that you will soon be able to design and deploy custom list templates. 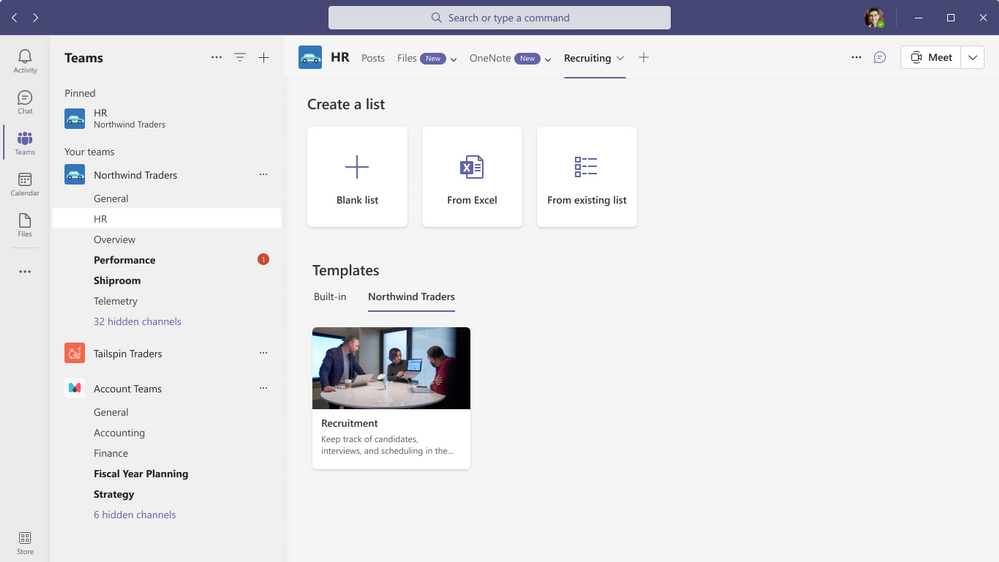 When you create a new site using the Lists app in Teams (shown above) or from the Lists app in Microsoft 365, you can choose from built-in templates or from custom templates designed and deployed by your organization (“Northwind Traders” in the above example).

Like the above Northwind Trader’s custom Recruitment template, you will be able to define preferred column layout, predefined views, related rules and column and row formatting. Give it a name and it’s ready for use.

Note, you will be able to manage which templates are available to which people, based on their job role.

Create simple if/then rules, based on changes to list information, to set reminders and send notifications directly from within Microsoft Teams. Users with edit permissions on the list can create and manage rules. Users with read-only permissions can’t create or manage rules. Once the feature is available to your users, they’ll be able to create a rule by selecting the Automate menu, and then click "Create a rule" in the list command bar near the top of the page. 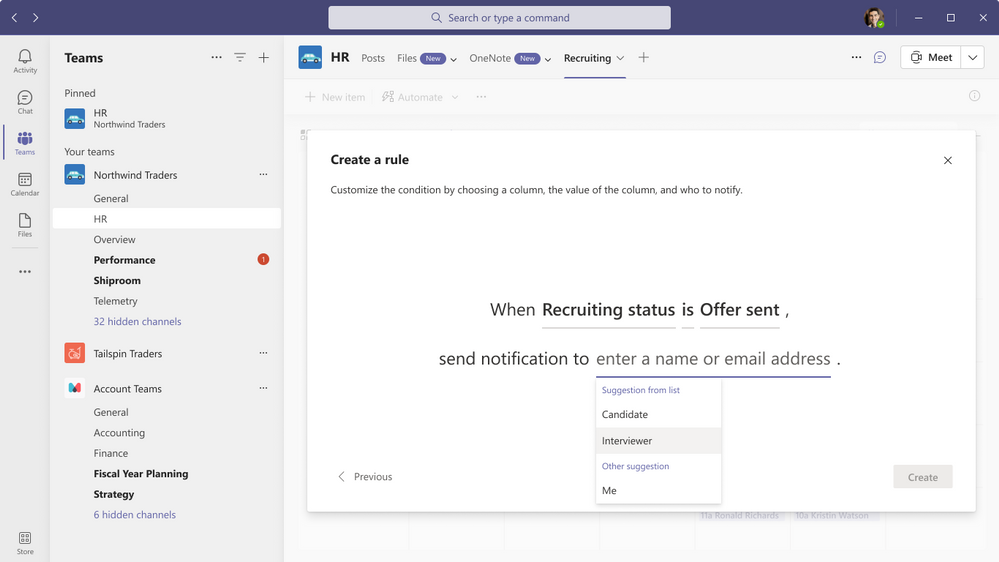 Build helpful list rules to notify yourself and others when information changes - now available inside Microsoft Teams.

Within the Web interface for Microsoft Lists, people can add or delete a comment on individual list items, including the ability to @mention someone, to collaborate and share insights. We are pleased to announce that we will bring the same comment capabilities to the Microsoft Lists app within Microsoft Teams. Make a comment, @mention a colleague, and that colleague receives a notification bringing them right to the list item – in context of your comment. 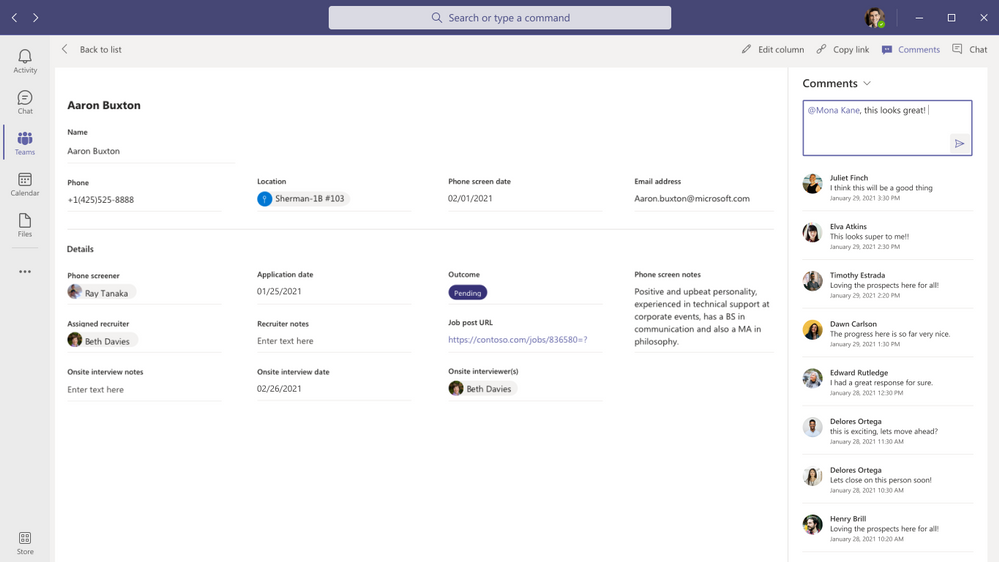 Add comments and @mentions that live inside the lists schema and storage - now available in Microsoft Teams.

Note: Microsoft is also working on a new admin control to enable and/or disable comments. More below in the Lists admin section.

Visualize any list with items that use date column information in a calendar view. This capability originally shipped in the Lists app for Microsoft 365 only, and now will show in Microsoft Teams when you add a list as a tab in Teams and have created a calendar view – or create one from directly within Teams. 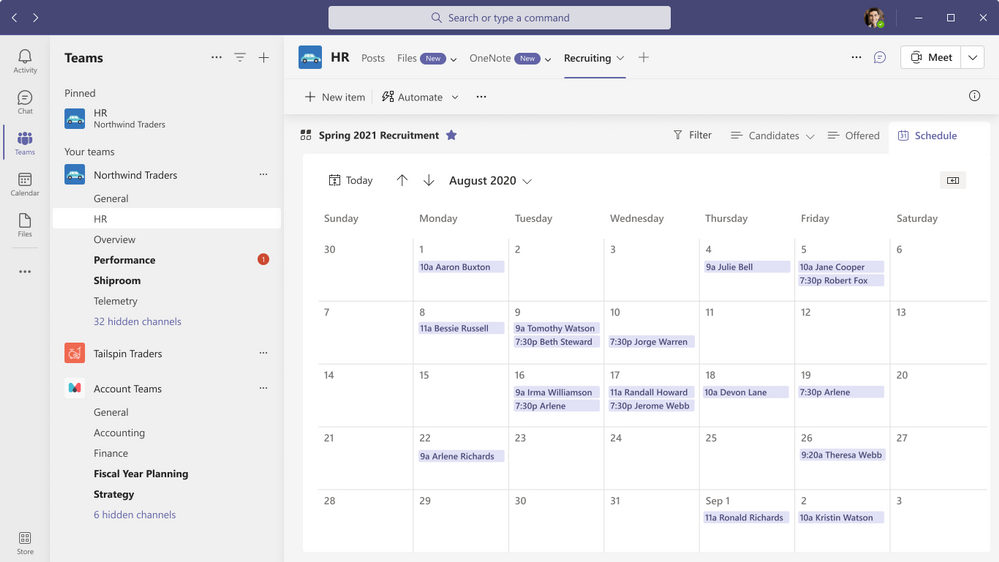 If you've configured a Calendar view for your list, you can now select it and view it in Microsoft Teams.

Let’s take a pause on feature updates and dig into a new Lists use case for our Canadian education customer, Brock University.

To best manage their student exchange program, Brock University faculty turned to Microsoft Lists. They needed a solution to improve information accuracy and automate the renewal process. It all started with an import from an Excel data table. And then, they added numerous views, groups, etc. with several Power Automate flows triggered off important changes. The list is prominently featured on team’s home page along other important content.

Brock University improved data integrity and with greater visibility to overall trends – all to the success of the student exchange program.

Additionally, we have recently published education specific information for Lists for teachers and students:

And now back to our regularly scheduled Lists feature announcements…

When you turn on rich text editing in your multi-line text fields, you can now edit directly inline in grid. You’ll be able to bold, italicize, underline, create bulleted text, hyperlink and more. Make the text and the list look and feel exactly as it needs to. 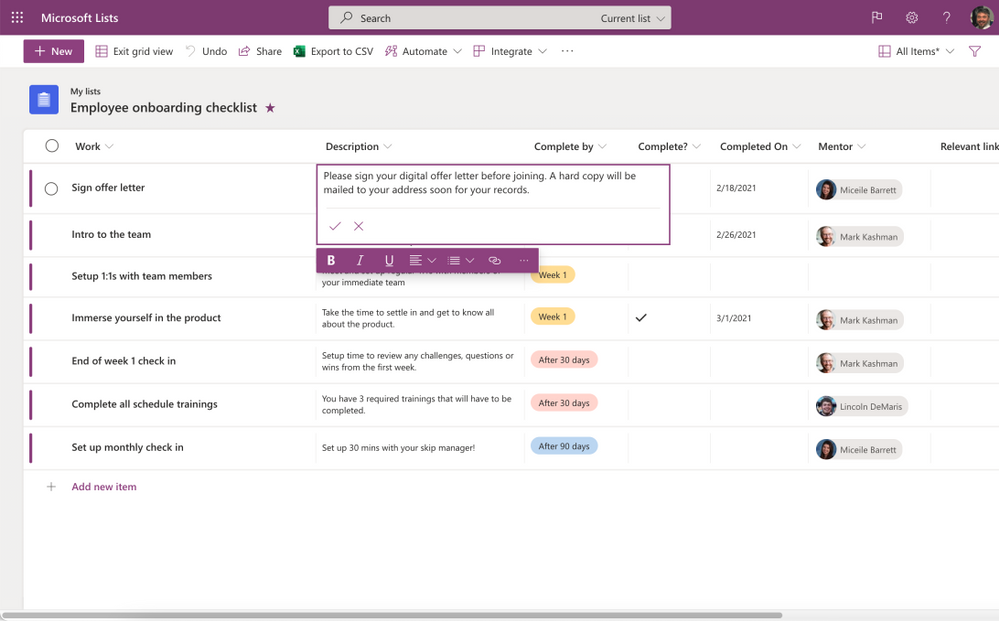 When entering text into a Text column, you'll see a new rich-text editor (RTE) with options to bold, italicize underline, bullet and more to make your text come alive.

When you type in the people picker, the autofill suggestions will come from Microsoft Graph. This makes the people picker experience more personalized and relevant based on who you work with most often. 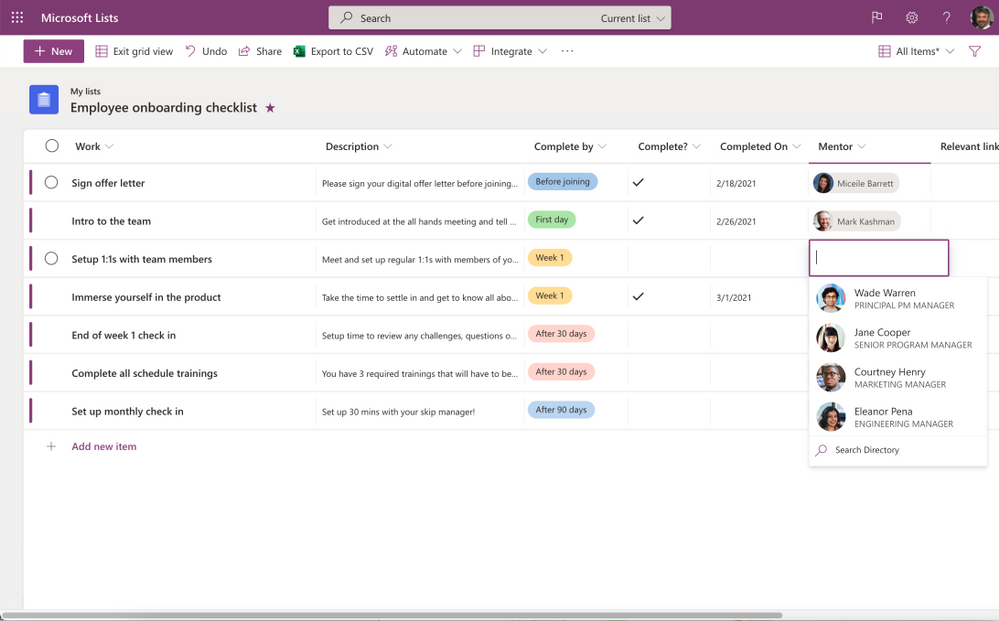 Now when typing in a name for a Person column, the results as you type will be based more on who you work with, coming from Microsoft Graph.

The List web part for SharePoint in Microsoft 365 allows you to display a list from your team or site on a page and customize it with your own title, view, and layout. And now, if you have created a Calendar view for your list, it will show properly in the List web part. 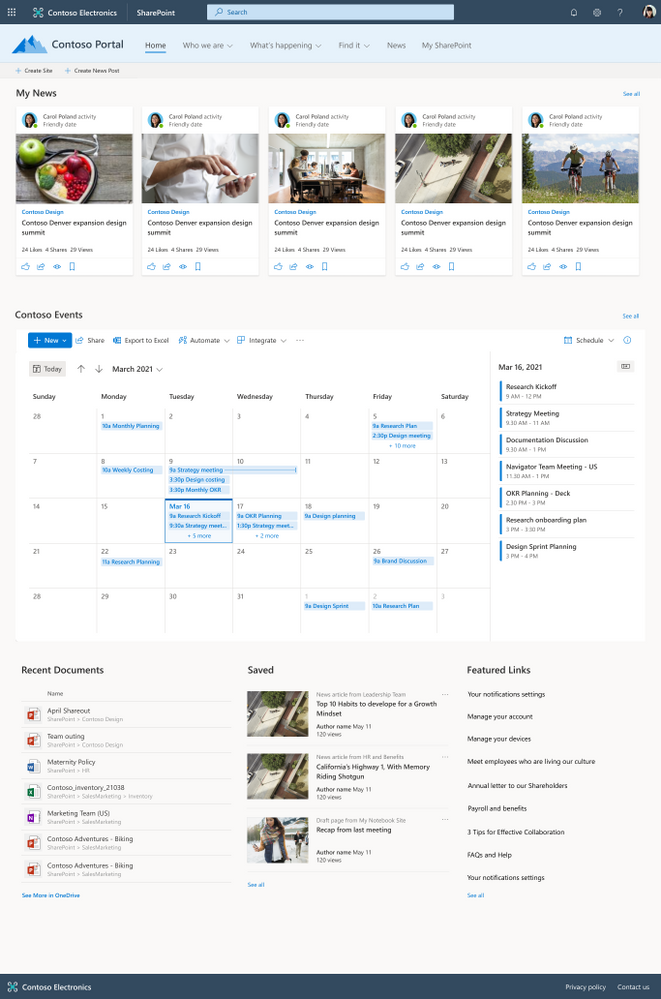 Today within the Web interface for Microsoft Lists, people can add or delete a comment on individual list items to collaborate and share insights. We are pleased to announce that we will bring the same comment capabilities to Microsoft Lists for iOS. 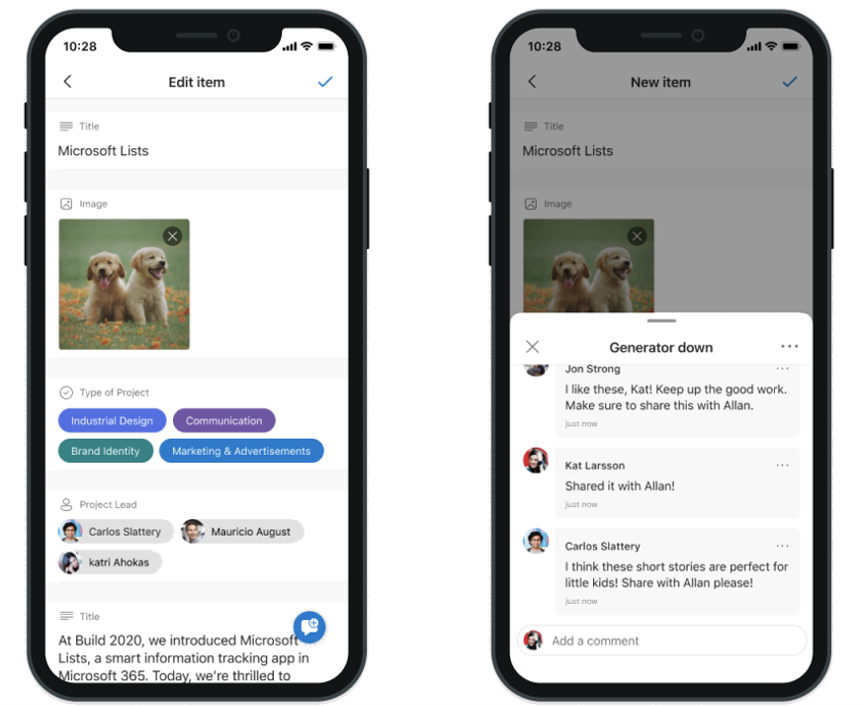 Microsoft is expanding device support on iOS to now include iPad. Microsoft Lists for iOS looks great on iPhone and iPad, scaling the user-friendly user interface to give you the best access to create, edit and share your information from your iOS device. Microsoft Lists for iOS on an iPad, showing the main home screen with Search, Favorites and Recent lists.

Microsoft recently released Microsoft Lists for iOS, and we're pleased to disclose that we are working on a version for Android. Microsoft Lists for Android will provide access to the lists you own and that have been shared with you. You can create new lists, edit list items, and easily share with other people. Work and information management doesn’t have to stop when you’re on the go. 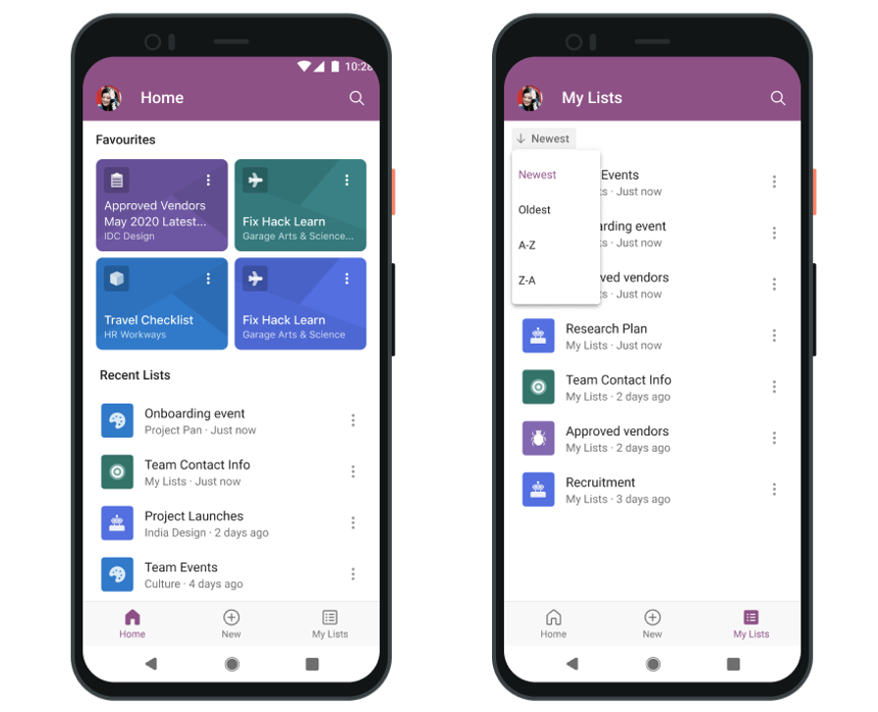 Microsoft Lists for Android - early design mockup of the Home and the My Lists screens – subject to change.

Note: The above image is an early design mockup of the Microsoft Lists for Android user interface– subject to change.

Versioning lists on by default

Your users will soon be able to track and manage SharePoint list information over time with list versioning. After this feature rolls out, when a user creates a new list in SharePoint, that list will have versioning enabled by default. End users will be able to view and recover previous versions from the list item history. By default, new lists will retain the 50 most recent major versions. Users can change how many versions are retained or disable versioning on any list they manage.

Learn more: Enable and configure versioning for a list or library
Note: No roadmap ID, already rolled out mid-February 2021.

Beyond tenant-level list controls, Microsoft is adding a list-level setting to enable or disable comments within Microsoft Lists. When enabled, people can add or delete a comment on individual list items to collaborate and share insights. Users can view all comments on a list item and filter between views that show comments or activity related to an item. Note: comments follow the permission settings inherent in SharePoint and Microsoft Lists. Users with read-only permission can only view comments. Those with list edit permission can make comments as well as delete comments; editing comments is currently not possible.