Turn on suggestions
Auto-suggest helps you quickly narrow down your search results by suggesting possible matches as you type.
Showing results for
Show  only  | Search instead for
Did you mean:
Troubleshooting BitLocker from the Microsoft Endpoint Manager admin center
By

By default, the BitLocker setup wizard prompts users to enable encryption. You can also configure a BitLocker policy that silently enables BitLocker on a device.

Note
A TPM chip is not required but is highly recommended for increased security.

BitLocker encryption failures on Intune enrolled Windows 10 devices can fall into one of the following categories:

The report will show a list of enrolled devices. You will be able to answer questions about their encryption status such as:

Next, let’s look at a few common failure scenarios. Each scenario details the encryption report status.

Scenario 1 – Device is not ready for encryption and not encrypted

When you click on a device that is not encrypted, Intune displays a summary of its status. In the example below, there are multiple profiles targeting the device: an endpoint protection policy, a Mac operating system policy (which is not applicable to this device), and a Microsoft Defender Advanced Threat Protection (ATP) baseline. 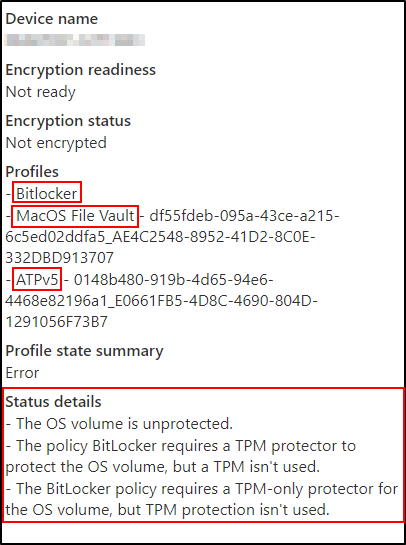 Scenario 1 - Device is not ready for encryption and not encrypted

The messages under Status details are codes returned by the BitLocker CSP’s status node from the device. The encryption status is in an error state because the OS volume is not encrypted. Additionally, the BitLocker policy has requirements for a TPM that are not satisfied by the device.

The messages mean that the device is not encrypted because it doesn’t have a TPM present and the policy requires one.

Scenario 2 – Device is ready but not encrypted.

This example shows that the TPM 2.0 device is not encrypted. 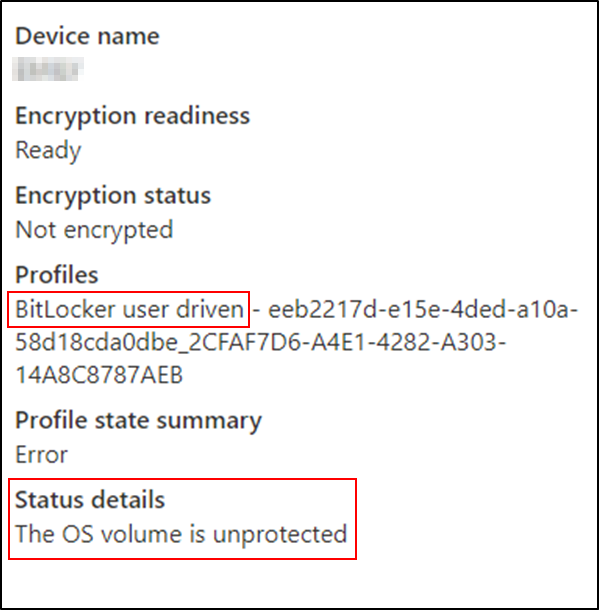 Scenario 2 – Device is ready but not encrypted.

This device has a BitLocker policy that is configured for user interaction rather than silent encryption. The user has not started or completed the encryption process (the user receives a notification message), so the drive remains unencrypted.

Scenario 3 – Device is not ready and will not encrypt silently.

If an encryption policy is configured to suppress user interaction and encrypt silently and the encryption report Encryption readiness state is Not applicable or Not ready, it is likely the TPM is not ready for BitLocker.

Scenario 3 – Device is not ready and will not encrypt silently.

Clicking on the device reveals the following reason: 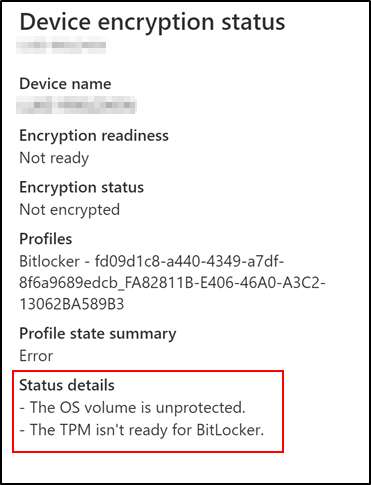 If the TPM is not ready on the device, it could be because it is disabled in the firmware or needs to be cleared or reset. Running the TPM management console (TPM.msc) from the command line on the affected device will help you understand and resolve the TPM state.

Scenario 4 – The device is ready but not encrypted.

There are several reasons that a device targeted with silent encryption is ready and not encrypted. 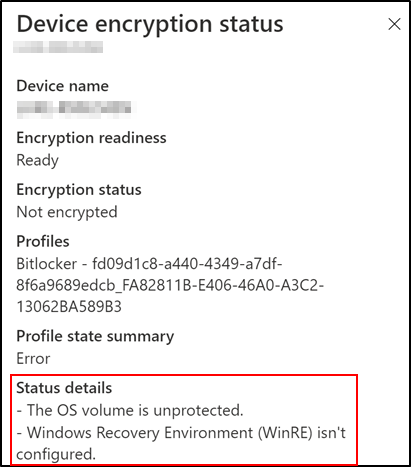 Scenario 4 – The device is ready but not encrypted.

One explanation is that WinRE is not enabled on the device, which is a prerequisite. You can validate the status of WinRE on the device using the reagentc.exe/info command as an administrator:

If WinRE is disabled, run the reagentc.exe/info command as administrator.

The Status details page will display the following information if WinRE is not configured correctly:

The user logged into the device does not have admin rights. 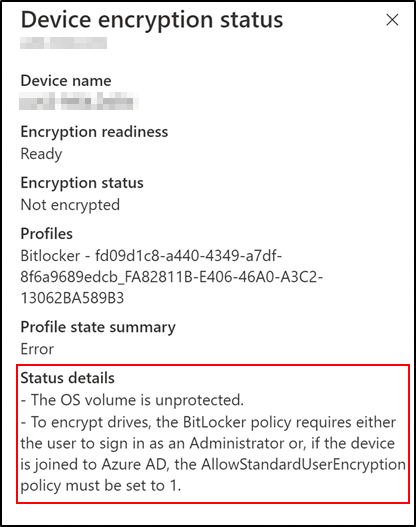 Device encryption status - User that does not have admin rights.

Switching Allow standard users to enable encryption during Autopilot to Yes will resolve this issue for Azure AD joined devices.

Scenario 4 – The device is in an error state but encrypted.

In this common scenario, if the Intune policy is configured for XTS-AES 128-bit encryption and the device it is targeting is encrypted is using XTS-AES 256-bit encryption (or the reverse), you will receive the error shown below. 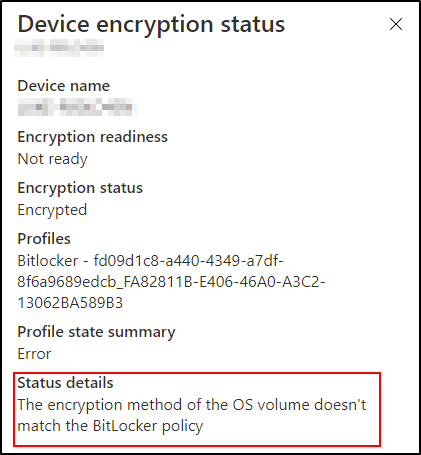 Scenario 4 – The device is in an error state but encrypted.

This happens when a device that has already been encrypted using another method—either manually by the user, with Microsoft BitLocker Administration and Monitoring (MBAM), or by the Microsoft Endpoint Configuration Manager before enrollment.

Scenario 5 – The device is encrypted but the profile state is in error.

Occasionally a device appears encrypted but has an error state in the summary. 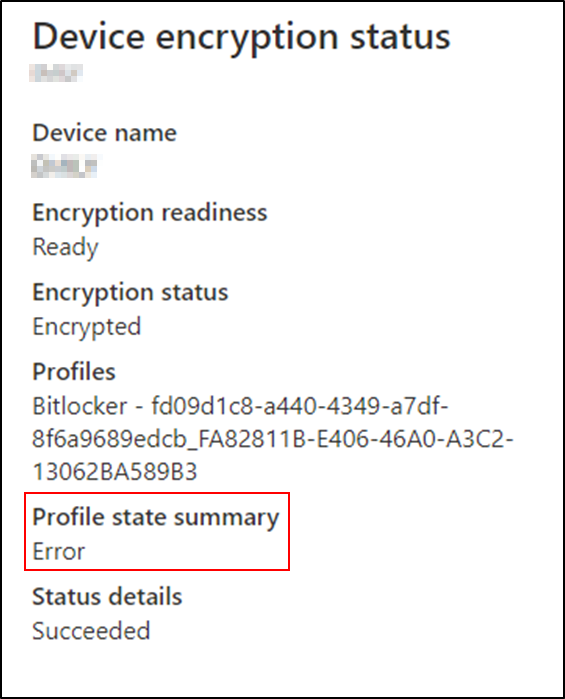 Scenario 5 – The device is encrypted but the profile state is in error.

This usually occurs when the device has been encrypted by another means (possibly manually). The settings match the current policy, but Intune has not initiated the encryption.

The encryption report is a useful starting point for troubleshooting encryption failures.  In some cases, you will need to investigate the device further to understand the reasons for failure.

To take full advantage of this troubleshooting method and the error details available in the encryption report, you will need to configure a BitLocker policy. If you are currently using a device configuration policy, consider migrating the policy. To perform either task, navigate to the Microsoft Endpoint Manager admin center and select Endpoint security > Disk encryption.

For further resources on this subject, please see the links below.

The next post will cover troubleshooting from the client side. Stay tuned! Here’s the series:

Let us know if you have any additional questions by replying to this post or reaching out to @IntuneSuppTeam on Twitter.