Turn on suggestions
Auto-suggest helps you quickly narrow down your search results by suggesting possible matches as you type.
Showing results for
Show  only  | Search instead for
Did you mean:
Support Tip: Google Chrome Updates may stop ADFS login from being successful
By

First published on TechNet on Feb 22, 2017
Intune has received reports of Android end users who are seeing failures when signing into the Intune Android Company Portal app.  Affected users see this error after entering their username: 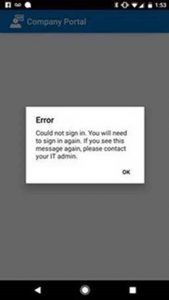 This may also affect admin users who use the Chrome v56 browser to sign into the Intune admin portal, as well as end users attempting to authenticate to the Company Portal Website browser-based end user portal using the Chrome v56 app.

The root cause is that Google made a change to Chrome in v56 to discontinue support for SHA-1 certificates.  This was announced by Google in November 2016:

If an IT Dept's ADFS environment uses certificates that are no longer supported by Chrome, then Chrome will fail to load web pages.  The Intune Android Company Portal app relies upon the Chrome system web view to host authentication flows on the device.

Chrome v56 is being released by Google in phases, and so some devices have v56 while others don't.  Over time as more devices upgrade their Chrome to v56 this issue will become more prevalent if SHA-1 certificates have not been replaced.

The complete remediation to this issue is to update the certificate configuration on ADFS servers to comply with what Chrome supports.