Turn on suggestions
Auto-suggest helps you quickly narrow down your search results by suggesting possible matches as you type.
Showing results for
Show  only  | Search instead for
Did you mean:
Intune app protection: Migrating between Mobile Threat Defense solutions
By

Intune can integrate data from Mobile Threat Defense (MTD) solutions such as Microsoft Defender for Endpoint and other non-Microsoft MTD partners as an information source for unenrolled devices using Intune app protection policies (APP). Admins can use this information to help protect corporate data within an Intune protected app and issue a block or selective wipe through APP conditional launch settings if the MTD determines a user’s device is in an unsecured or compromised state.

Historically, only one MTD connector (per operating system) could be active in an Intune tenant for APP usage at a time. This led to difficulty in MTD migration scenarios where APP integration would need to be fully disabled in the existing MTD connector tenant-wide prior to enabling APP integration on the connector the organization intended to migrate to.

With Intune’s 2210 (October) service release, organizations are now able to enable Defender for Endpoint in addition to one non-Microsoft MTD connector on the same tenant for APP usage to help facilitate MTD migrations.

As part of this, we have introduced a new APP setting, Primary MTD service, that helps determine which threat signal source (Defender for Endpoint or non-Microsoft MTD) should be authoritative in instances when a tenant has both connectors enabled for an OS platform and a targeted user’s apps need to be evaluated through the conditional launch process. 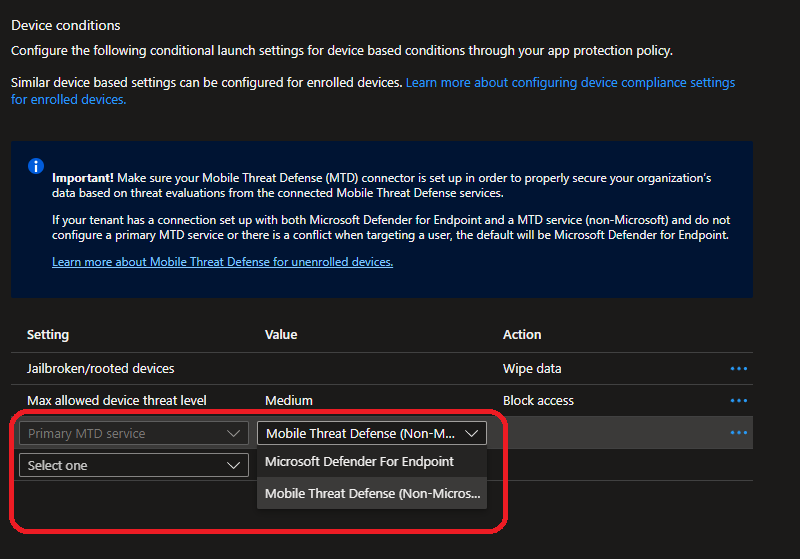 Before enabling APP integration for a given OS in the second connector, modify your APP policies to ensure that users are assigned the proper Primary MTD service.

Note: The Primary MTD service setting has no effect if only one connector is enabled in the tenant for APP on the given OS platform. If “Max allowed device threat level” is set to any value, only the configured connector for that OS will be used, even if it does not match the connector specified in the primary value.

Then, in the Intune admin center, navigate to the Connectors and tokens pane within Tenant Administration. Enable the respective OS integration for APP functionality under Microsoft Defender for Endpoint in addition to the existing MTD under Mobile Threat Defense, where it is already enabled (or vice-versa, depending on which service your organization is migrating to).

If a set of users have already configured and registered with a non-Microsoft MTD or MDE and are then targeted with a new primary threat signal service, there are two things that need to occur before they’re prompted to set up the new service on their device.

Note: On Android, Company Portal v5.0.5662.0 or higher is required to support the MTD migration scenario. On iOS, the protected client apps must have integrated an Intune SDK version that supports MTD conditional launch evaluation (v12.0.15 or higher).

Once these two activities have occurred, the user will be blocked by conditional launch and required to configure the new threat signal service on their device. Once Intune has received the threat signal from the new service (and it’s within the allowed threshold), the user can access the Intune protected app and remove the previous MTD app from their device. 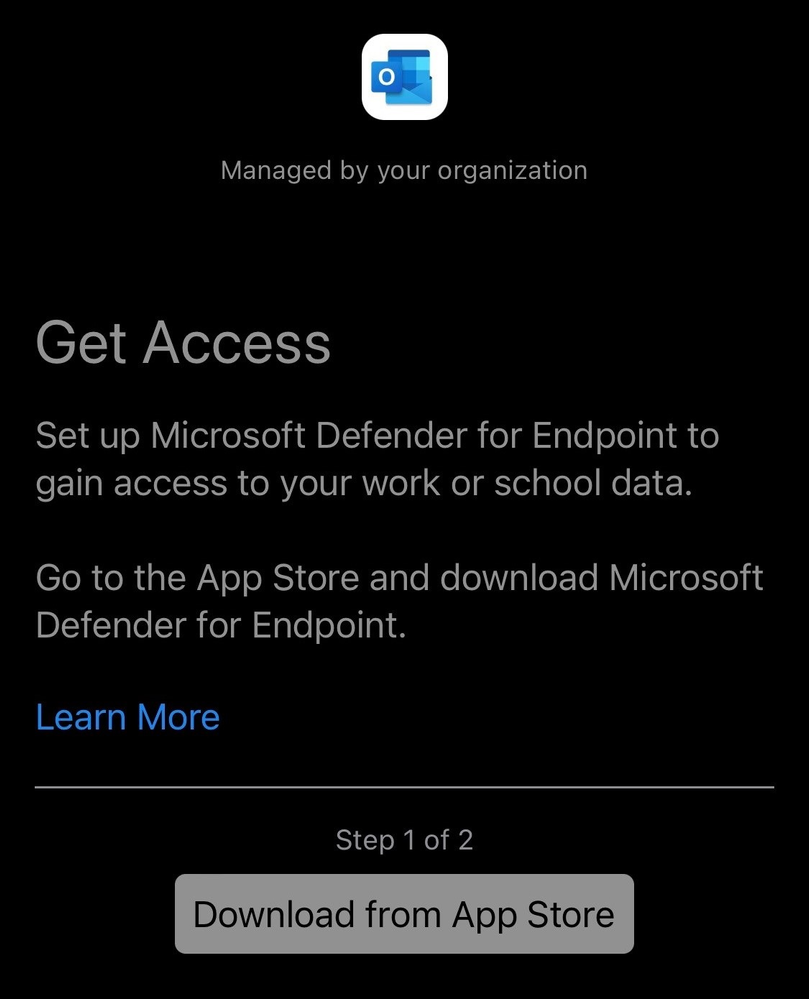 A screenshot of the messaging a user may see when their device has been targeted with a new primary threat signal service.

See the table below to determine the expected behavior when Primary MTD service setting is configured for each scenario.

Note: This table assumes the app protection policy also contains a conditional launch maximum allowed threat level requirement. If there is no maximum threat level requirement in the app protection policy, the Primary MTD service setting is ignored. Additionally, targeting the same user(s) with different Primary MTD configurations across multiple apps on the same OS is unsupported and may result in unpredictable behavior. (For example, Outlook on iOS requires MDE while OneDrive for iOS requires non-Microsoft MTD). Determine your required Primary MTD service setting on a per-user/OS platform basis rather than per-user/app basis.

If you have any questions on this new feature, please leave a comment below or reach out to us on Twitter @IntuneSuppTeam.