Turn on suggestions
Auto-suggest helps you quickly narrow down your search results by suggesting possible matches as you type.
Showing results for
Show  only  | Search instead for
Did you mean:
How Application Context, Assignment and Exclusions Work in Intune
By

How Application Context, Assignment and Exclusions Work in Intune

This post is not about any new functionality or changes to the service, it’s about app assignment fundamentals that have been around for a while in Intune but are not always completely understood. The aim of this post is to provide you with enough technical information about how app assignments work to help you better plan and troubleshoot your app deployments. I focus most on Windows 10 apps rather than iOS/Android device apps, but many of the concepts apply across the board. Let me know if the details in this “how it works” matches your expectations/assumptions! We’re always open to your feedback and perspective.

Some Intune apps let you choose App Install Context. This can be configured on the app itself or on the app assignment.

Although the concept of Device/User applies broadly across different app types, there are some nuances and implementation differences worth calling out. These nuances largely exist due to differences in Configuration Service Provider (CSP). CSPs are the Windows bits of code that translate Mobile Device Management instructions into action. For example, there is an Office CSP running on Windows 10 devices that is in charge of installing Office when Intune tells it to, whereas the EnterpriseDesktopApp CSP is responsible for installing Windows MSI line-of-business apps. Each CSP is built with a different set of capabilities. When you look at two different CSP’s, you’ll see different configurations which is why you’ll see different manageability options in Intune. You can read more about Windows 10 CSPs and capabilities here.

This table summarizes the capabilities per Windows 10 app type:

*Only “Dual-mode” MSIs can be configured for User or Device context by an IT pro. If the MSI isn’t “Dual-mode” the context is determined automatically by Intune based on the contents of the uploaded MSI file and the option to change context is greyed out.

** With Windows Universal LOB apps, you can only choose between user/device when assigning to a device group. If you assign to a user group, you must choose user context.

Here’s an example how you can use this table. If you were thinking about deploying a Windows MSI line-of-business app in your organization, you could choose an App install context of device context while creating the app. After assigning it appropriately, you could be sure that each Windows 10 user who logs on will have the app in their Windows profile and will be able to use it. Intune reporting will show that the app was installed for the device.

After creating an app, your next consideration is assigning that app. You have two choices:

So, the key thing here is to understand how and when Windows 10 actually does its MDM sync. It has a sync schedule (we document it here), and each time the sync task fires, the device asks Intune for policy as either the Device (no Azure AD user logged on) or the Device+User (Azure AD User logged on). A key callout is that any sync attempt where the device asks for policy of the Device+User, Intune checks if the user is Intune licensed. If they don’t have a license assigned, then the whole sync session fails.

When you assign an app to a group of users or devices, you also choose an Assignment Type as a mandatory step. Internally, we call this “Assignment Intent”. I’ll cover three intents here:

A question I frequently get asked is “How does Intune handle conflicts between these assignment types?” We strongly discourage customers from overlapping assignment types – the reason being that we want app management to be as simple and predictable as possible. In fact, the app assignment UI actually blocks you from assigning the same group to conflicting assignment types: 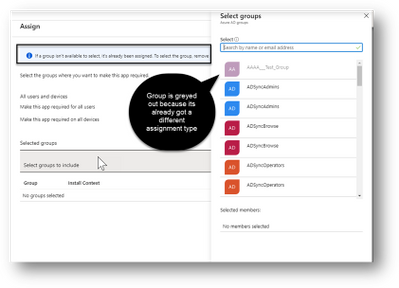 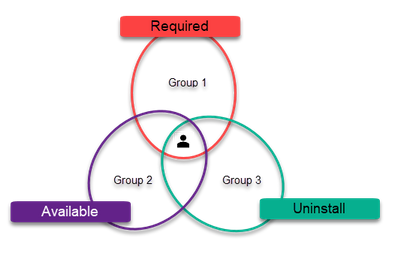 The result of the above (User has Available, Required and Uninstall assignments) is actually a merge between Required and Available. The app is installed on the device without any user interaction, but the app will also be listed as an app available for installation if the user goes to the Company Portal. Group 3 (Uninstall) loses the conflict battle. We document this conflict resolution behavior here.

While we are talking about Available apps – here’s another key point:

The Intune assignment UI doesn’t explicitly call this out when picking your groups, but you’ll notice that if you create an Available Assignment type, there is no “make this available to all devices” option for Available apps. See the image below: 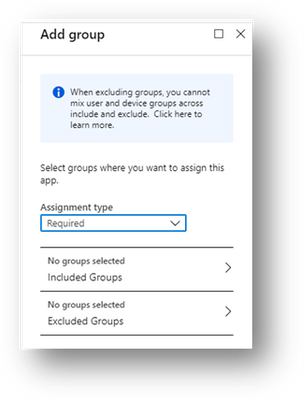 Excluded Groups are a feature added to limit the scope. For example, if you wanted to deploy an app to “All Users in Building 121”, but not “Engineering Users”, you could either get tricky with your Azure AD group creation... or target the app to “All building 121 users”, then exclude “Engineering Users” group. For every assignment (Available, Required, Uninstall) you can have one excluded group.

In this example, the same user “Sally” is both in scope of the Include and the Exclude group. This means that Sally won’t get the app.

Putting it all together

So, thinking about the capabilities and restrictions I called out, I created this matrix that should serve as a quick reference on what you can and can’t do per app type, context and assignment group.

I hope this provided some useful information. If you have any questions or points of clarifications, please add them to the comments below. You can also reach me on Twitter: @Scottduf.

10/1/20: With an update to the table to clarify the Web Apps User context. Thanks for the feedback in the comments!