Turn on suggestions
Auto-suggest helps you quickly narrow down your search results by suggesting possible matches as you type.
Showing results for
Show  only  | Search instead for
Did you mean:
Android 8.0 ("O") behaviour changes and Microsoft Intune
By

First published on TechNet on Aug 21, 2017
Intune has announced day 0 support for Android 8.0 (code named "O").  You can be confident that once your users upgrade to the released version of Android O, Intune's device and app management features will continue to work seamlessly.  This applies to all facets of Android management with Intune including work profile management, non-work profile management, and App Protection Policies. The only thing you need to do is update to the latest version of the Company Portal, which is available now in the Play Store.

That said, there are two behaviour changes to be aware of.


If you're managing MDM-enrolled Android devices but you're not using a work profile (i.e., Android for Work) then you need to enable Installation from Unknown Sources in order to install line-of-business APKs.  In an effort to increase security, Google has introduced a behavior change in Android O that changes where this setting is.  On prior versions, it used to be a device-wide setting.  On O, each individual app has its own "Install unknown apps" permission.  You can still successfully install line-of-business APKs just as you did before, you just need to go to a different place to turn it on.  End users will be guided through the flow of enabling this permission for Company Portal if they try to install a line-of-business APK that you deploy to them.

Where it was prior to Android O, under Settings > Security 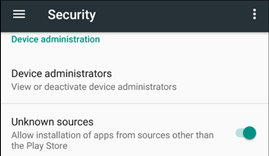 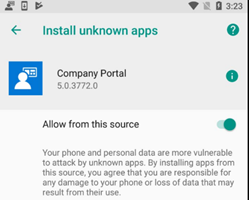 Block apps from unknown sources compliance setting does not work on Android 8.0


Due to the fact that the unknown sources setting has been moved from a device setting to a per-app permission, it’s no longer possible for Company Portal to detect whether this permission has been granted at the device level.  As a result, this compliance policy will not work on Android O: 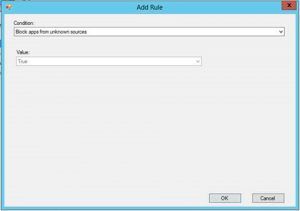