Turn on suggestions
Auto-suggest helps you quickly narrow down your search results by suggesting possible matches as you type.
Showing results for
Show  only  | Search instead for
Did you mean:
Preparing for Carbon-aware: Part I. Why power’s carbon emissions vary hour to hour and day
By

Preparing for Carbon-aware: Part I. Why power’s carbon emissions vary hour to hour and day

In the power grid, the key strategy for reducing carbon emissions is the large-scale use of renewable generation (e.g. wind turbines and solar panels).  In the past 10 years, these technologies have advanced rapidly, reducing the cost for generation capacity (U.S. dollars or Euros per megawatt) dramatically and now they are cost competitive with modern fossil-fuel generation such as combined-cycle natural gas plants.  These economics drive growing new renewable generation.  In 2020, nearly two-thirds of the new U.S. generation capacity was wind and solar[1].

Building a reliable power grid is HARD!  Power grids connect a network of generators to a dispersed collection of loads, matching supply to demand instantaneously and continuously at thousands of locations.  While we may frequently experience short-term internet outages, a power outage creates much greater disruption, including outrage and sometimes even loss of life! The difficulty of building a reliable power grid was recognized by the National Academy of Engineering recognized the construction as the #1 greatest engineering accomplishment of the 20th century[2].  The recent transformation of the power grid by the addition of large quantities of unreliable renewables, the growing foundation for decarbonisation, makes today’s power grid even more impressive!

Adding solar and wind to the power grid is difficult

Increasingly, the power grid subsists by exploiting renewable generation when it is available, shuffling it against other sources, such as natural gas generation[3].  The power grid mixes these generation types to efficiently synthesize the reliable power that you depend on every day (and datacenters run on!).

Generation from wind turbines varies with slow-moving weather fronts.  These fronts might move at 10-25 miles per hour (40 kilometers per hour), causing generation to vary gradually over several days.  Solar-photovoltaic generation varies faster, tightly synchronized with core daylight hours with magnitude tied to cloud cover and even temperature.  At most latitudes,  power levels and hours of generation vary seasonally. Daily generation in the CAISO grid for 1/13/2021 in megawatts combines wind, geothermal, and solar, but the increase of solar generation during the day increases total renewable generation 5-fold.  In Texas’ ERCOT power grid, seasonal variation of solar generation is 3-fold, and wind generation varies by over 50% seasonally. 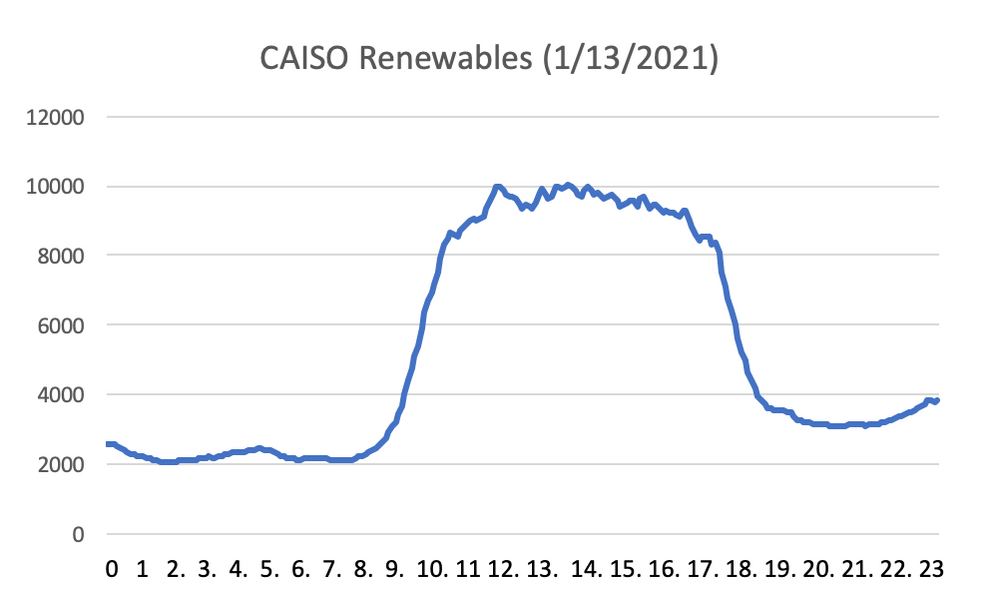 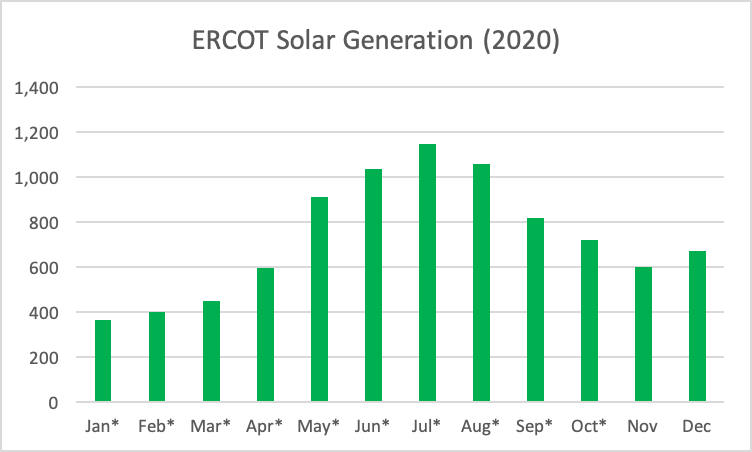 To bridge from unreliable renewables to reliable power, the grid uses conventional resources, increasingly natural gas, to complement renewables.  Thus, the generation mix and carbon-emissions / megawatt-hour change constantly with variation in load and generation.  Together, they produce the varying carbon-emissions in today’s grid.   For example, consider one day of fluctuating generation in the CAISO grid below. 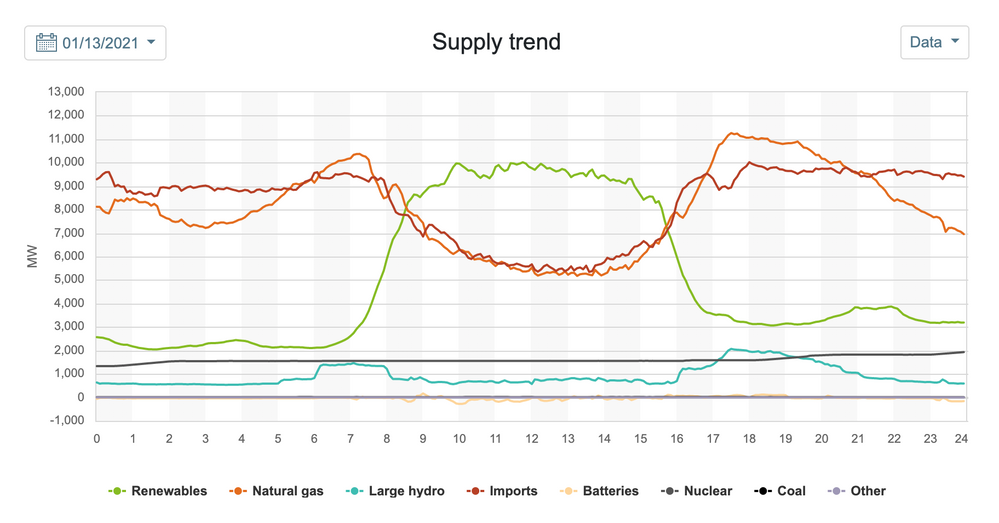 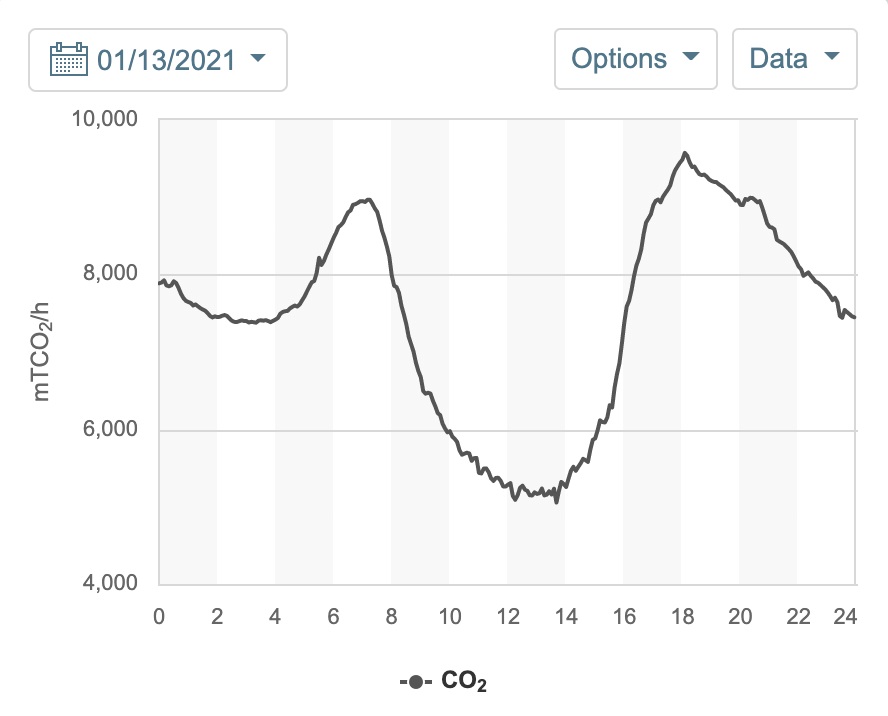 There is a pronounced increase of solar in daytime, and complementary natural gas, hydro, and “imports” from other grids.  The California power grid total emissions that result are complex with sharp swings and spikes from the increased load at the beginning and end of the day.  Lower load at night decreases the total grid carbon, compensating in part for the lack of solar power.

How should an application architect or developer think about managing carbon emissions?  Not only is the situation complex in a single power grid varying significantly from one hour or day to the next, but the fluctuations may be completely different in each grid.  Since software is designed to run anywhere (portable), climate-aware design is difficult -- changes may be unproductive or worse yet a net-negative.

Ideas to prepare your cloud application to be carbon-aware:

Cloud providers already offer deferrable, discounted resources (e.g. spot block or equivalent). We anticipate growing offerings in the future that provide both lower carbon-emissions and lower-price.  This flexibility is the best way to prepare for the future of carbon aware computing. Stay tuned, Part II is coming soon! 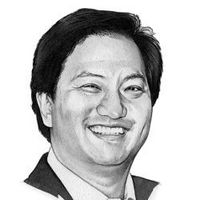 Andrew A Chien is the William Eckhardt Professor of Computer Science at the University of Chicago and the leader of the Zero-Carbon Cloud project.  He also serves as a Senior Scientist at Argonne National Laboratory, the Editor-in-Chief of the Communications of the ACM, and Director of the CERES Center for Unstoppable Computing  From 2005 to 2010, he was the Vice President of Research for Intel Corporation.  Dr. Chien is a Fellow of the ACM, IEEE, and AAAS.  He received his SB, SM, and PhD degrees from the Massachusetts Institute of Technology.

[3] Current power grids range from 10% to 40% renewable, so our discussion focuses on that range.  There are serious technical challenges to push these fractions towards 75% and more in the coming decades.