Note: Some of the documentation referenced may not be fully available at the time of publishing of this post.

Exchange Server 2013 Cumulative Update 6 (CU6) was released today and provides several important updates for modern Public Folders. This blog post introduces you to the updates delivered in CU6 and discusses our on-going investments in public folders. 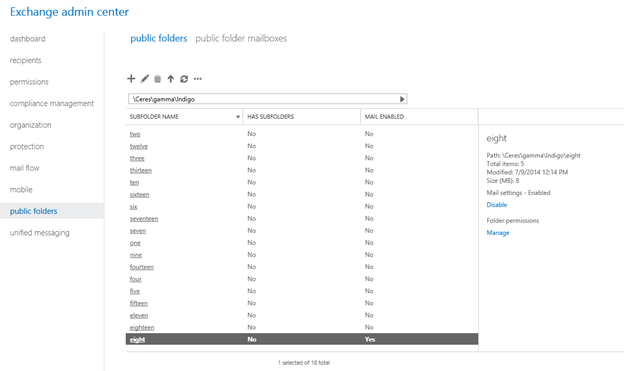 In addition to the increased folder scale capabilities CU6 delivers improvements for concurrent access of Public Folders by reducing lock contention in store for hierarchy sync and content mailbox access.

An additional change delivered in CU6 for Public Folders helps improve the administrator experience post migration. All PF mailboxes serve hierarchy by default in Exchange Server 2013. We have introduced new logic to check if the hierarchy is fully synced to a mailbox after migration. If it is, then the mailbox is automatically made available to serve public folder hierarchy connection else we wait for full sync to complete. This eases work for admin to manually manage readiness of a mailbox after migration completes. Admins can still turn hierarchy serving off and on (default = on) as they please. Refer to the Public Folder article for specific attributes to control hierarchy sync.

The increased scale capabilities for public folders in CU6 enables more advanced configurations to begin migrating to modern Public Folders. To meet the needs of these large scale migrations the team has created deployment guidance to assist customers migrating larger scale public folder hierarchies. This deployment guidance will become available in the next few weeks. We will update this post with a link once it is available.