Back in May, I discussed the changes we introduced in Exchange 2013 Cumulative Update 5. Specifically with CU5 and later, an OAB can only be assigned (or linked) to a single OAB generation mailbox. This architectural change addressed two deficiencies in the Exchange 2013 OAB architecture: However, this change did not improve user accessibility in a distributed messaging environment. For example: 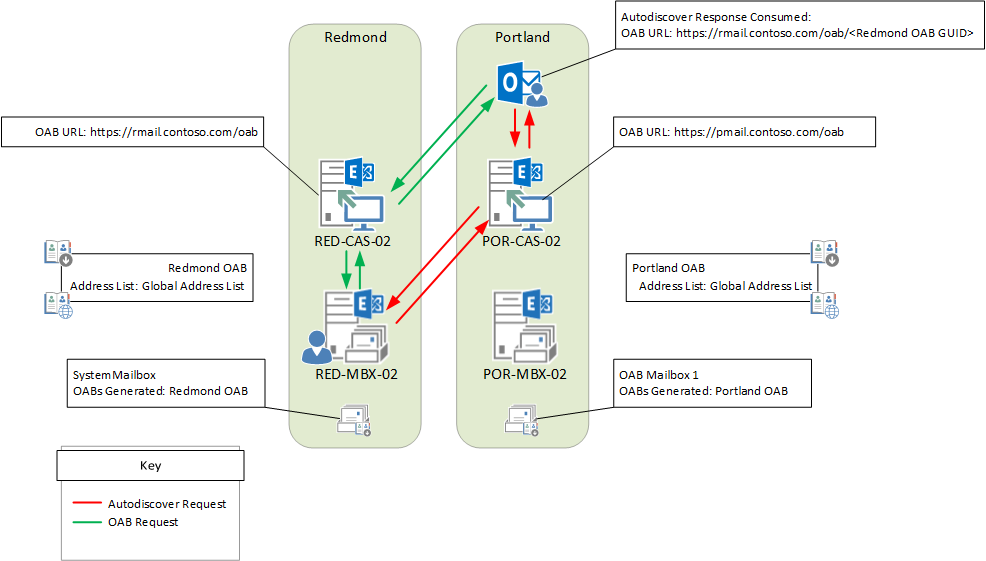 Let’s say the blue user, whom we shall now call Scott Schnoll, has his mailbox located in Redmond. Due to a clause in his work contract, Scott needs to work out of the Portland office for the next six months. In order to keep Scott’s address book up to date, Outlook will trigger an OAB download every 24 hours (based on the time it was last successfully downloaded), connecting to the Redmond CAS infrastructure which proxies the request to the Redmond Mailbox server that hosts the OAB generation mailbox that generates the Redmond OAB. Having Scott’s OAB files downloaded across the WAN is not an optimal experience. Obviously, the administrator could point Scott’s mailbox to the Portland OAB instance; however, that would require Scott’s client to undergo a full OAB download. Unfortunately, prior to CU7, this is the only way to mitigate this scenario.

Exchange 2013 Cumulative Update 7 introduces the capability for an OAB generation mailbox to host a shadow copy of another OAB. This functionality enables additional Mailbox servers to be an endpoint for OAB download requests. By default, this feature is disabled and is configurable per OAB. 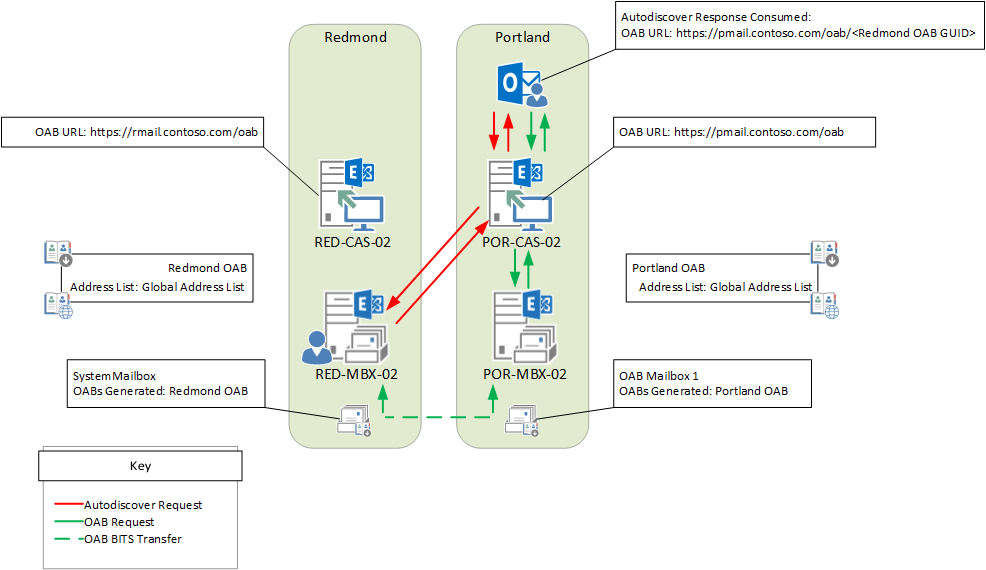 Referring back to our previous example, once shadow distribution is enabled for the Redmond OAB, Scott’s Outlook client, via the Autodiscover response his client gets from the Portland CAS (which as we know is actually going to be generated on the mailbox server in the Redmond site, as that’s where Scott’s mailbox is), will now access the Redmond OAB using a URL resolving to the Portland CAS infrastructure (https://pmail.contoso.com/oab/redmond oab guid/); this is accomplished by Autodiscover leveraging the X-SourceCafeHeader value specified in the HTTP proxy request. The first time an attempt is made to access this OAB will result in a 404 response as the OAB files do not exist on the Portland Mailbox server that hosts the OAB generation mailbox, OAB Mailbox 1. This event invokes the OABRequestHandler, which initiates an asynchronous transfer, via BITS, of the Redmond OAB files to the Portland MBX server hosting the OAB generation mailbox. During the next attempt to synchronize the OAB, Scott’s Outlook client is able to download the necessary OAB files locally.

How do I enable shadow distribution?

The GlobalWebDistributionEnabled and VirtualDirectoriesproperties of an OAB are still used by Autodiscover to determine which CAS OAB virtual directories are eligible candidates for distributing the OAB. Given the architecture in Exchange 2013, any CAS can proxy an incoming OAB request to the right location, therefore, with CU7 and later, the recommendation is to enable global web distribution for all OABs hosted on Exchange 2013.

Prior to enabling shadow distribution, you should deploy an OAB generation mailbox in each Active Directory site where Exchange 2013 infrastructure is deployed (assuming CU7 or later is deployed in each site).

Once global distribution is enabled and OAB generation mailboxes are deployed, you can then enable shadow distribution on a per-OAB basis:

How do I disable shadow distribution for an OAB?

You can disable shadow distribution on a per-OAB basis:

Does accessing a shadow copy trigger a full OAB download?

What does the client experience when a shadow copy is triggered?

If the OAB files do not exist on the Mailbox server hosting the OAB generation mailbox, then the Outlook client will report error 80190194 (BG_E_HTTP_ERROR_404). 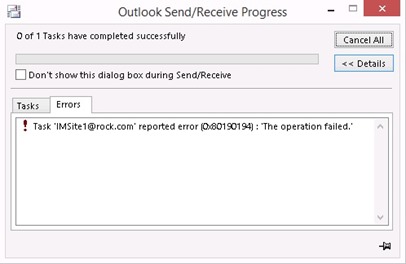 How does a shadow distributed OAB get updated?

As soon as a new OAB is generated and published on the “master” Mailbox server, all the Mailbox servers hosting shadow copies will stop distributing their now-outdated copies. The first user who requests access to the OAB will trigger a full synchronization of the OAB to the shadow copy. The following events are reported:

What happens if I enable shadow distribution for an OAB, but there is no OAB generation mailbox in the site where the user is located?

Shadow distribution completes our work on improving the OAB capabilities in the on-premises product and hopefully satisfies the requests from our customers that deploy distributed messaging environments. As always, we welcome your feedback. Ross Smith IV Principal Program Manager Office 365 Customer Experience

0 Likes
Like
Share
17 Comments
Not applicable
What will happen if the Master OAB Mailbox Server goes down? Will Shadow Copy OAB mailbox server process the new OAB request?
0 Likes
Like
Not applicable
@Ross - you mentioned that user will receive 80190194 error in the Outlook client, this will increase service desk calls stating oab is not downloading. any reason why its not automatically updates from master copy like we have in 2010 web distribution

on a different Mailbox server, it can become a shadow distribution point the next time it is accessed via CAS proxy.

It sounds like the first user to request the shadow copy of the OAB might have a delayed download of the OAB, since the local copy is updated on demand, is that right? Anything we should be aware of here?

0 Likes
Like
Not applicable
"The first user who requests access to the OAB will trigger a full synchronization of the OAB to the shadow copy". Does it mean that the first user will fail to get latest OAB to download in first try? So shall we write some Powershell script to trigger

that shadow distribution time by time to avoid this?

0 Likes
Like
Not applicable
You guys realize that OAB with MAPI over HTTP is broken by the October Outlook 2013 update (KB2986204), right?
0 Likes
Like
Not applicable
A user will receive 80190194 error in the Outlook client (send/receive dialog) when they attempt to access the OAB before it has been copied over.
0 Likes
Like
Not applicable
Great Article Ross....Quick Question...if we have multiple Mailbox Server on Portland site, is it possible to customize or configure Shadow Copy OAB to specific server..or we can able to move this shadow OAB to different server...during maintenance/shutdown

activity/hardware failure and also for HA

Is the Exchange team aware of this issue and is it fixed in this upcoming update?

We created an issue about the OAB, but did not get any solution from Microsoft. Will this issue been solved in the future version of on-premises Exchange 2013.

The issue about OAB is :

Outlook 2010/2013 with cached mode, access the address book, then select to any other container (not the container : global address book), it will lag about 10-20 sec.

And will have a message "outlook is trying to retrieve data from the Microsoft exchange server.....". After 10-20 sec, the address book will show the listing of the container.

We created an issue about the OAB, but did not get any solution from Microsoft. Will this issue been solved in the future version of on-premises Exchange 2013.

The issue about OAB is :

Outlook 2010/2013 with cached mode, access the address book, then select to any other container (not the container : global address list), it will lag about 10-20 sec.

And will have a message "outlook is trying to retrieve data from the Microsoft exchange server.....". After 10-20 sec, the address book will show the listing of the container.

0 Likes
Like
Not applicable
So to add Gulab Prasad's question, I want to know what if Master server is down and the client on a different site has not requested for download and there has not been any replication yet. What will happen here? This seems to be again a single point of