How clients connect to the public folder hierarchy mailbox

When are new mailboxes eligible for this process?

Scenario 1: What happens when default public folder mailbox value has not been set on the user mailbox? 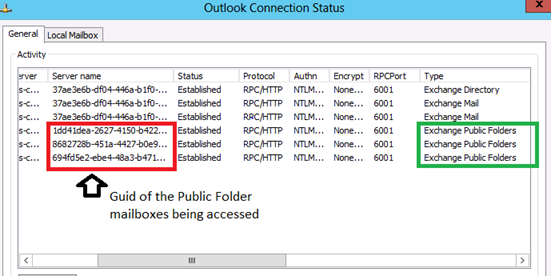 Once the above is confirmed, the next step is to assign the desired public folder mailbox as the DefaultPublicFolderMailbox on the user mailbox. In our example this would be accomplished by running the below command:

Now, when the client opens Outlook, Autodiscover provides the DefaultPublicFolderMailbox’s SMTP address in the <PublicFolderInformation> XML element and the client then performs a second Autodiscover request to learn how to connect to this public folder mailbox. When we check the Outlook connection status, it will list the assigned public folder mailbox.

Our customers deal with communication links that may be highly latent and expectedly inoperable for periods of time. For demonstration purposes let’s consider our favorite company called Contoso which has the following configuration: 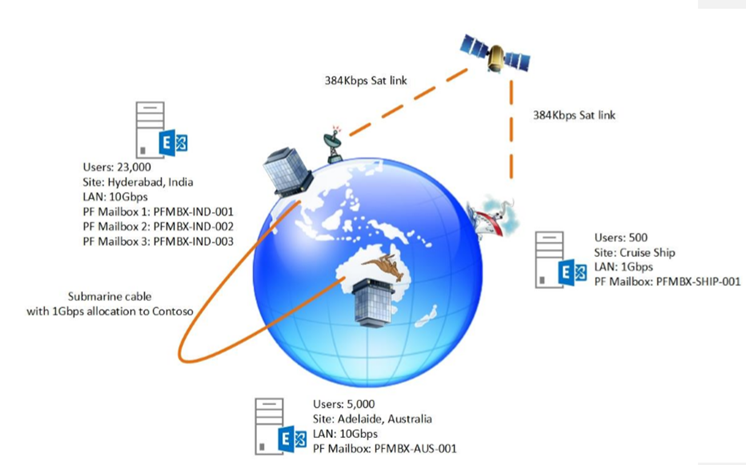 Three company sites are listed below: To maintain communications with their ships at sea, Contoso has established a 384Kbps satellite link to each ship and has also installed a dish at their Hyderabad site. All network routes to/from ships are routed via Hyderabad’s own satellite link. Contoso has also purchased 1Gbps of bandwidth on a submarine cable link to Australia. All WAN routes to/from Australia site traverse this link.

Challenges with the above deployment

If we were to simply deploy modern public folders with all the default values, we could see some interesting things happen. For example, all users could be offered any of the five public folder mailboxes for hierarchy regardless of their location. The worst-case scenario here would be a ship based user trying to access PFMBX-AUS-001 for hierarchy information or an Adelaide based user trying to access PFMBX-SHIP-001 for hierarchy information. In either of those scenarios we see client traffic traversing round-trip not only along the longest network path, but also the one with the least bandwidth and most latency. In this extreme example, you would more than likely have clients calling the help desk reporting the Outlook RPC popup after they attempted to expand the public folder tree. Considering the above problems, we recommend administrators with similar decentralized and complex network topologies consider configuring user mailboxes to access public folder mailboxes located within local or geographically closer sites as their default public folder mailbox.

What would work better?

In an environment like the one in the example, it may make sense to set IsExcludedFromServingHierarchy to $True for the public folder mailboxes on all cruise ships and Australia. This will remove them from being returned as valid public folder hierarchy endpoints for Autodiscover and OWA, leaving only the three well-connected Hyderabad based public folder mailboxes setup for automatic discovery. Additionally, the DefaultPublicFolderMailbox attribute at the mailbox level should be utilized for employees based on the cruise ship or the Australia continent to ensure they always attempt to connect to a public folder mailbox that makes sense based on their geolocation. One caveat here is if a user from the Australia office were to visit the cruise ship (for work purposes sadly and not fun in the sun!), their client would continue to connect back to Australia for their PF hierarchy connection. In addition, the Hyderabad office with 23,000 mailboxes would need to monitor user concurrency to determine if they need additional public folder mailboxes or not over time to stay within supported user concurrency limits.

Things to remember and plan during the deployment:

What are those (HOSPFM) and (COSPFM), and why do we require them? 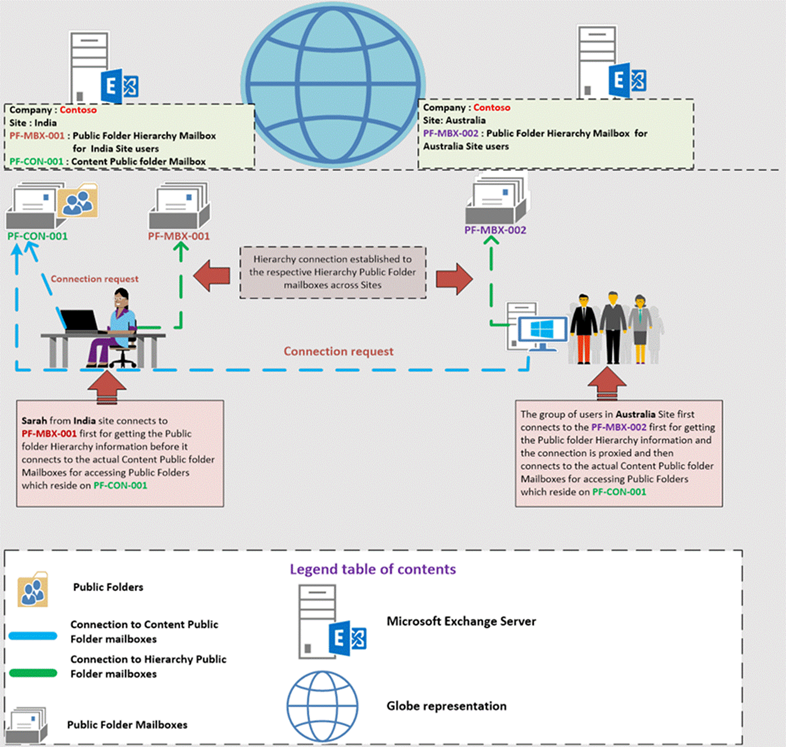 Note: Moving public folders only moves the physical contents of the public folder; it doesn't change the logical hierarchy, or layout of folders in the folder tree.

To move the public folder content, run the command:

To remove the existing PublicFolderMoveRequest, run the command:

Note: If a parent public folder and its subfolders need to be moved to another public folder mailbox, this can be done using Move-PublicFolderBranch.ps1 script, located in \scripts folder. 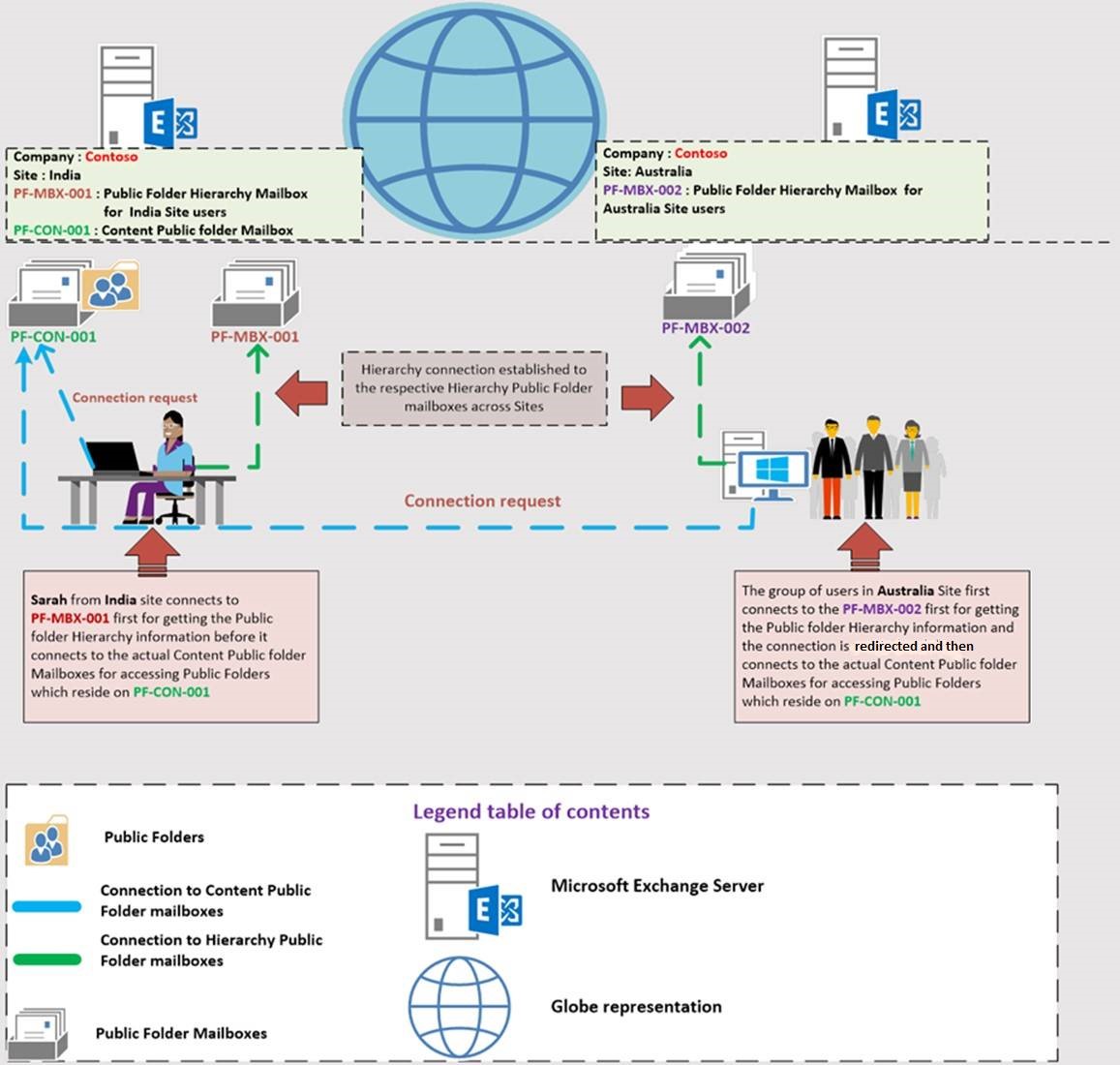 Looking at the above example, it becomes very important to determine network latency and bandwidth before you start deployment of public folder mailboxes in geographically dispersed environment to avoid any latency issues when accessed by end users. In such situations, the recommendation will be to use tools like Netmon which can help in determining the connections happening to public folder mailboxes. There is a great tool written by Mark Russinovich called Psping, which can be helpful in determining the round-trip latency. Based on the results customers can decide whether the current network is suitable for their environment or if there are any changes that needs to be done.

Considerations when deploying public folder mailboxes in the organization, to ensure they are protected and readily available to the clients:

In the above post, we have provided information on how public folder mailboxes are accessed, and the importance of correctly deploying them in a geographically dispersed environment. In upcoming posts, we will discuss topics related to public folder logging analysis, management and quota related information We would like to say thanks to Public Folders Feature Crew team for their valuable inputs while this blog post was being written. Special Thanks to Ross Smith IV, Nasir Ali, Scott Oseychik for reviewing this content and validating the guidance mentioned in the blog post and Charlotte Raymundo, Nino Bilic for helping us to get this blog post ready! Siddhesh Dalvi and Brian Day
1 Like
Like
22 Comments