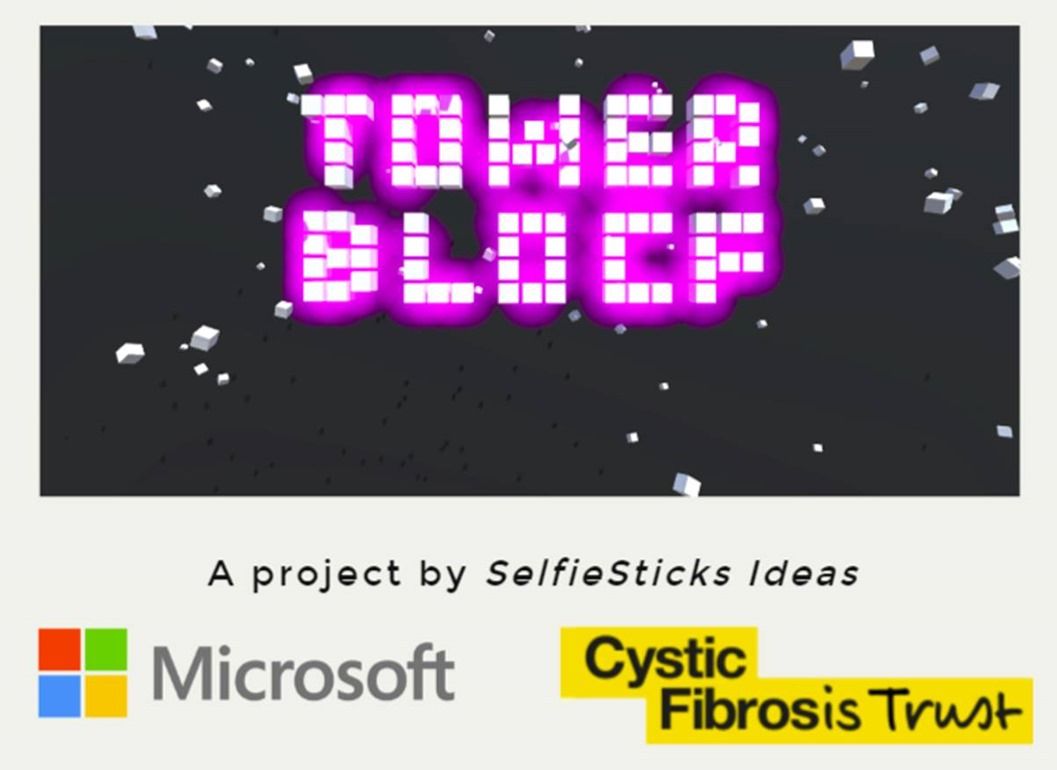 We entered the #ICHealthHack having no idea of what it was going to be like. Most of our team hadn’t even heard of the Fizzyo challenge before Saturday. So initially, since our team consists of ¾ engineers we were of the consensus to stay away from actual software and game design and especially Unity. Little did we know we would end up developing a game on Unity with lots of help from an event helper Nikolay Yotov who had lots of previous experience using Unity software.

We were surprised to have a very well developed task outlined by Microsoft which was purely game design based. The infrastructure and task organized by Microsoft allowed us to quickly shift focus from hardware based games to a narrow range of possible software games. Our previous experience in the healthcare sector as biomedical engineers and a medic played a substantial role in defining our user requirements. Our thoughts on the challenge itself would be that we wanted a simple game that would prevent the patient from getting bored, while they would have to breathe correctly to maintain the game. 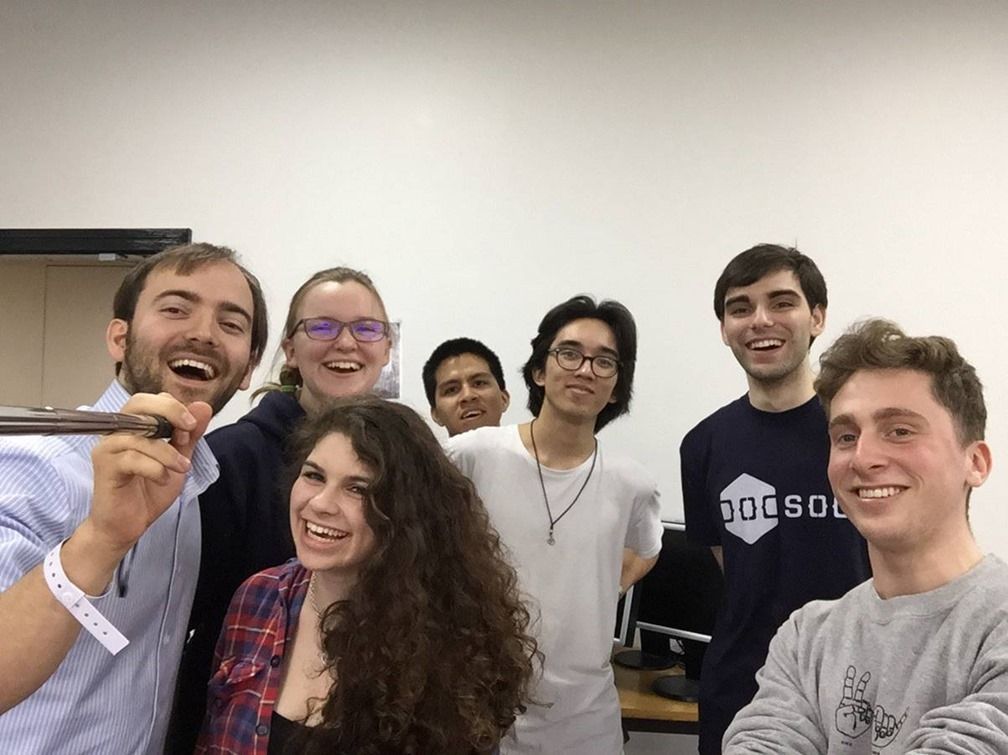 Together we brainstormed ideas and user requirements by talking to the physio therapists present at the Hackathon that were also working on the Fizzyo project. At this point we started to understand that the fizzyo challenge is software based, which is hard to do if you’re an engineer. So we began by going to the Unity Tutorial by Unity expert Simon Jackson. Although none of us had worked with unity before the biomedical engineers had some experience working with C++ and the visual UI helped us a lot.

I was quite surprised to see Microsoft employees be so open and nice to us. We knew we weren’t the typical people Microsoft would want to recruit so we expected people in suits to shadow us during the challenge and then drag out the best computing students. Instead we found the opposite. The Microsoft team was actively helping all participants working on their challenge and facilitated participants learning and progress on their concepts and games by bringing the appropriate people together. Previously my perception was that a health hack was purely for software engineers or computing students, but now I know that I can tackle these events with my current skillset.

Our idea began to develop into a tower stacking game. The game seemed both fun and easy enough to implement in the given time frame. We had a game, but we needed to make it Fizzyo challenge specific. By only allowing the user to play while they were blowing into the Fizzyo device. That way they would be incentivized to commit to their daily therapy routine by being able to play the tower stacking game. We did this by matching the pressure recorded by the PCB provided by Microsoft to the game visibility. The child blews into the Fizzyo they can see the game and can play. If they don’t blow into the Fizzyo because they need to cough the game doesn’t autocomplete or pause but simply becomes difficult to see with the fun hiding underneath a grey plane that is removed once the user blows into the Fizzyo again. 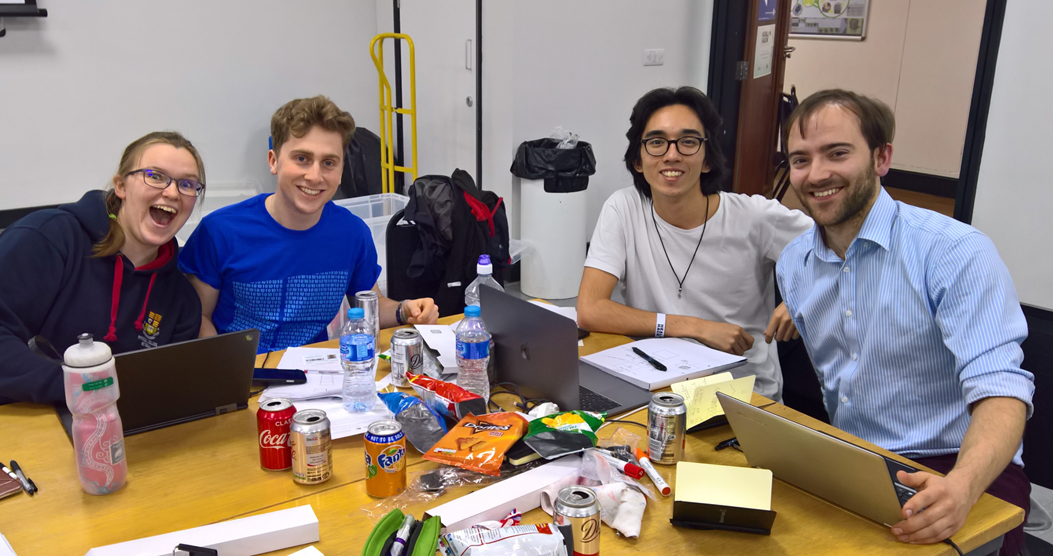 The next day Benji gave the normal tower stacking game to 11 children, 6 of which had CF, asking them to rate the game on a scale of 10 and measuring the time of how long it took for them to return his phone. Here is our data visualized in blocks in the picture below shown in blocks.

The game got lots of positive feedback, with a six-year-old taking advantage of the blocks continuously appearing in the same location and “hacking” the game and making his 8-year-old brother jealous. Our thoughts as game developers for the weekend: Perfect! We want competition to make the game more fun.

Once the team was reunited after a very informal clinical trial and church, we teamed up with Nikolay who had lots of previous experience using Unity to help us develop our vision of the game.

Following us breaking the Fizzyo device and learning lots about Unity, Cystic Fibrosis and each other’s snacking preferences we presented before a panel of judges. And to our great surprise we won 2 nd place overall and secured the 1 st place in the Microsoft Fizzyo challenge. 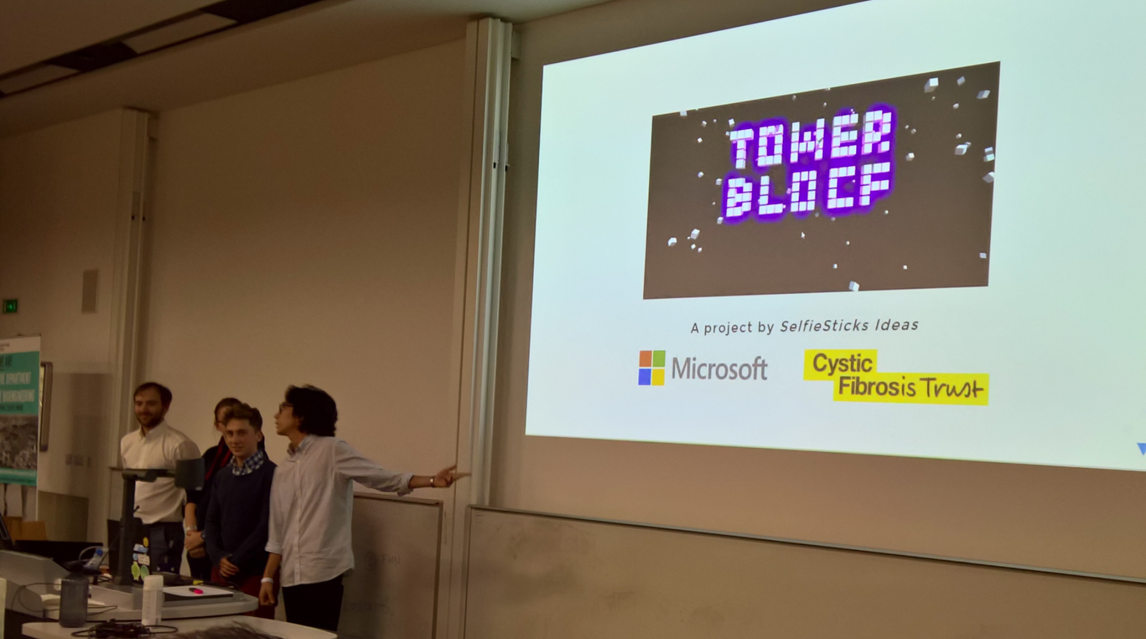 In great disbelief, we headed forward to take a picture. 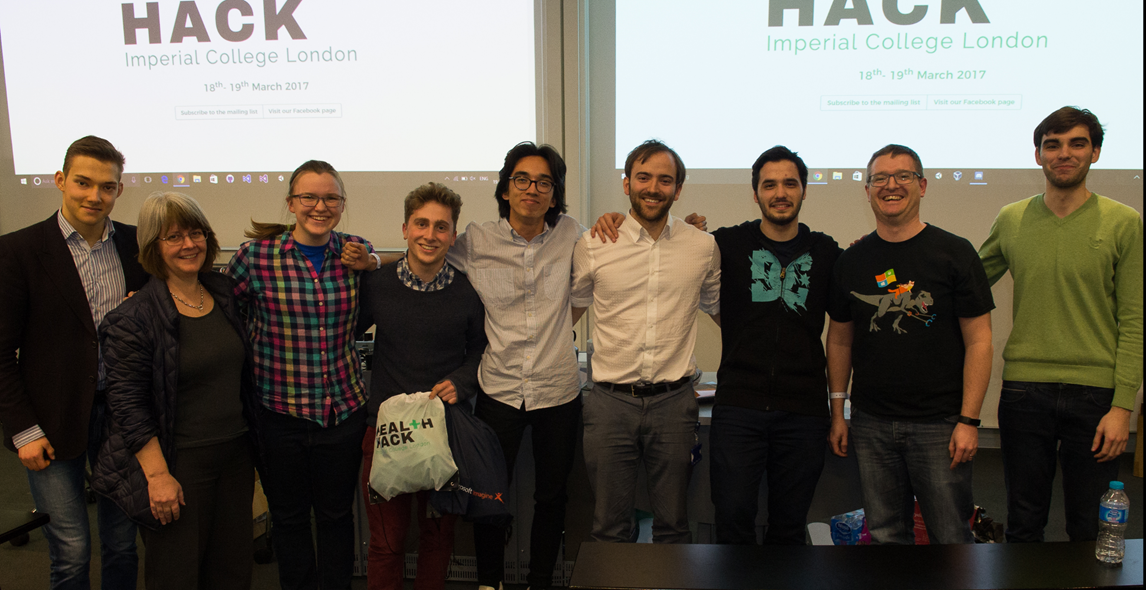 Turns out some of the children we were showing the tower blocks games in the hospital on Sunday morning were the same ones that spoke to the Physio Therapists affiliated with Microsoft and were excited by the proposal to make the mundane task of breathing, huffing and coughing fun through gamification!

Next we would like to improve the game by having the diming be user specific using a machine learning algorithm. Since the user changes each time it is important to dim the game at different rates depending on age, size and lung capacity. We hope to spend another weekend (after exam season) where we could meet up with our team again and create a more final and implementable version of this game for actual CF patients, perhaps with a version for boys and a version for girls.

If you want to get involved in creating games for Cystic Fibrosis patients head to https://ichealthhack.devpost.com/ and download our game on to your computer and play it! Or check out the example game on https://github.com/ichealthhack/fizzyo-challenge . Happy Hacking :D