Turn on suggestions
Auto-suggest helps you quickly narrow down your search results by suggesting possible matches as you type.
Showing results for
Show  only  | Search instead for
Did you mean:
Genomics and Proteomics with Mixed Reality and Data Science
By

Genomics and Proteomics with Mixed Reality and Data Science

About the MSc Project Team

Rachel is passionate about the application of technology to advance health and medicine. She studied Medicinal Chemistry at Trinity College Dublin, before pursuing UCL’s M.Sc Computer Science programme. She was determined to work on a project for her Master’s dissertation which had medical applications, so getting to work with Microsoft, building an app for their cutting-edge HoloLens headset is fantastic. The exposure to the world of AR/VR, and the Unity game engine, has captured her attention.

Nidhi read Mathematics in St Stephens College, Delhi, before starting her her Masters in Advanced Computational Methods for Aeronautics, Flow Management, And Fluid Structure Interactions at Imperial College London. She chose to continue her studies in Computer Science with another Master at UCL, where she got the chance to use her excellent logic skills in practice to develop high quality code. The opportunity to work with new technologies such as HoloLens presented a new challenge which she was keen to tackle

Genes and proteins are complex, dynamic molecules, and the ability to visualise them as three-dimensional entities is of immense interest to the scientific and medical communities. Rachel Slater and Nidhi Goel, two UCL Computer Science students are spearheading the technical development efforts of genomic & proteomic visualisation apps for Microsoft’s HoloLens headset. The prospect of enabling visualisation of life’s critical building blocks in mixed reality environment is an exciting challenge.

Rachel is focussing on the genetics side of the project, and after analysing the best potential sources for retrieving genomic data, decided to utilise Ensembl’s REST API. In a series of HTTP requests, the app can access a breadth of data on genes, transcripts, exons, sequences and more. The application’s users, likely scientists and clinicians, can input a gene name (such as ‘BRAF’, “brca2’), and this gene will be rendered in front of them, as a number of long cylindrical transcripts, each subdivided into it’s introns and exons in positions in accordance with the sequence coordinates. Rachel plans to go a level deeper, allowing the user to ‘zoom into’ specific regions of the transcript, and view the associated sequence of DNA nucleotides. In addition, she will annotate the chosen genes with interesting data such as if it contains ‘protein coding regions’, and whether it is the canonical transcript. There is scope to go further and incorporate genomic variation data into the view, for example, well-known ‘SNPs’ (single nucleotide polymorphisms), that lead to disease to humans. 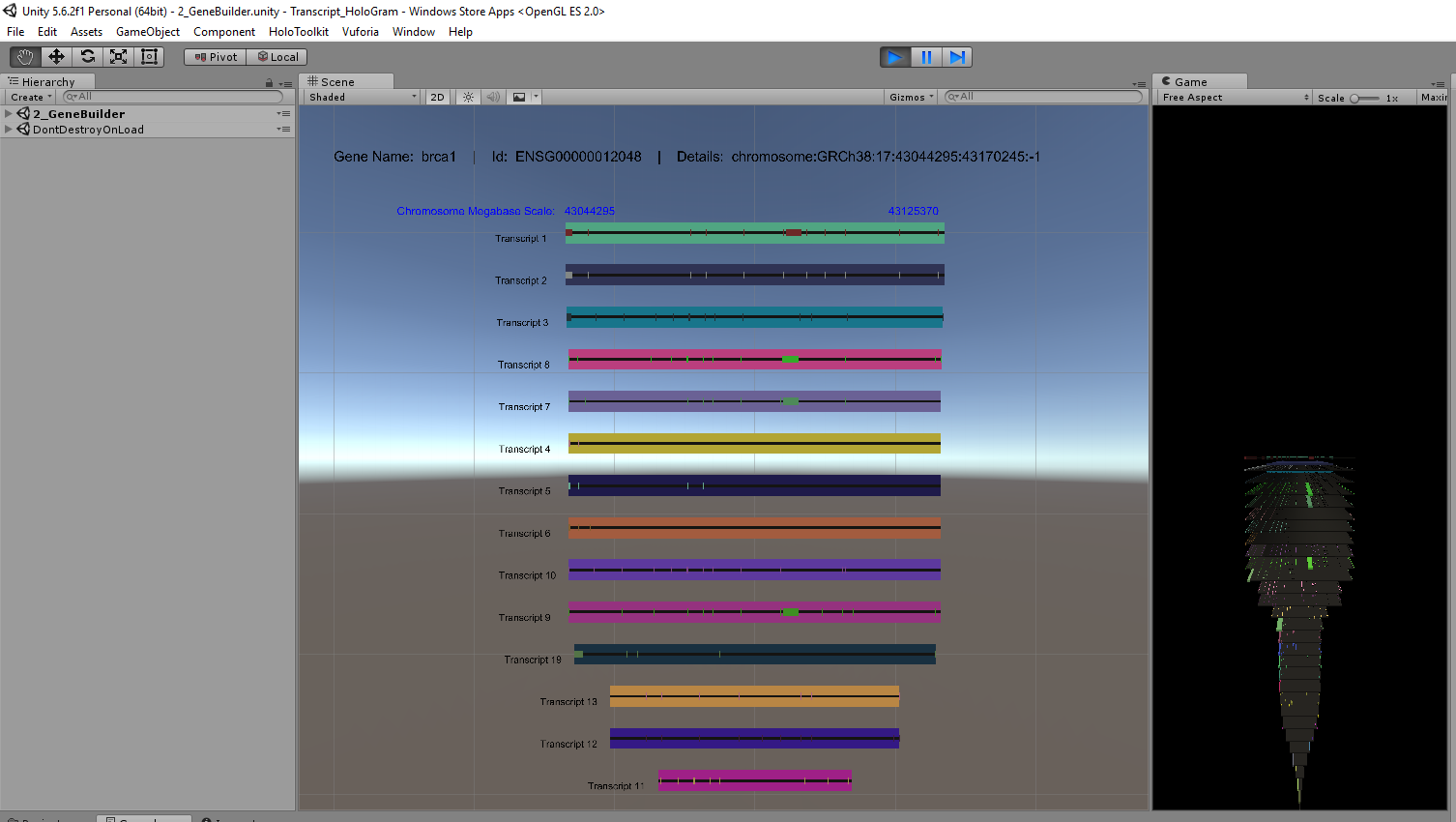 Early modelling of genetic transcripts with their composite introns & exons, based on raw data

Nidhi is focussing on the proteomics side of the project, and is utilising the Protein Data Bank (the RCSB’s PDB) to retrieve the required data for an app about proteins and their structures. Proteins are analysed using X-Ray diffraction which gives rise to .pdb file formats containing information about the 3D structure of the macromolecule. The app’s users can enter the link to the pdb file of the protein structure to be visualised — which can be found on the RCSB website ( https://www.rcsb.org ). Using the. pdb file and data about the coordinates,the 3D atomic view of the protein is generated. Here the particular atoms and their properties can be studied. Nidhi is working on providing a better view of the secondary (alpha helix, beta sheets etc) and tertiary structures (protein folding). Users will be able to rotate the structure or zoom in on the structure to analyse it better. There is scope to go a step further into the quaternary structure of proteins. Also, creating a database with .pdb files would make the search easier.

All of the hallmarks of a great HoloLens application are being included in the development of these apps — gaze targeting, gestures, voice commands, and spatial mapping. Both Rachel and Nidhi hope to provide a refreshing take on examining genomic/proteomic data.