Turn on suggestions
Auto-suggest helps you quickly narrow down your search results by suggesting possible matches as you type.
Showing results for
Show  only  | Search instead for
Did you mean:
Donaco UK Imagine Cup National Winners
By 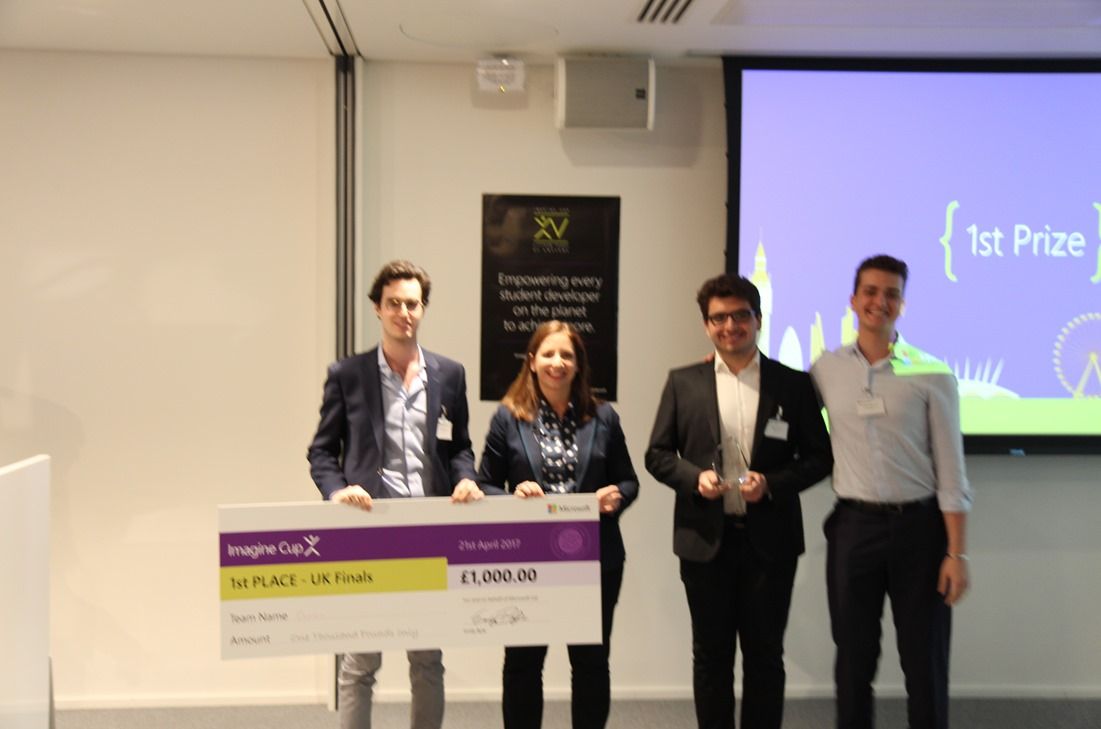 Donaco was thrusted forward during the 3Hack event, a hackathon organized at Imperial College London in collaboration with Microsoft, where we met Suleiman Mashini, an Electrical and Information Engineering student, and Monika Shrestha, a Msc Management student at the Imperial Business School. During the hackathon, we were approached by a Business Evangelist from Microsoft who encouraged us to participate in the UK Imagine Cup.

The aim of Donaco is to facilitate the relationship between donors and charities, by bringing trustworthy charities to users based on the content they read online. The idea is very simple: While you read an article online, Donaco measures your interest on the topic. If it detects interest, a small banner will appear in a corner of your screen, which you can click to find a suggestion of three charities relevant to the article. You can then easily pay using integrated, one-click payments (i.e. PayPal, Apple Pay…) and then track your donations within your own portal.

The idea for Donaco was started during the long commutes in the London underground. Michael, an Electrical and Electronic Engineering with Management student from Imperial College, was reading an article about the Syrian refugee crisis in the tube, and he felt frustrated that despite all the technology that surrounds us, reading about crises remains so much easier than doing something about them. It was out of this frustration that Michael started refining the concept behind Donaco, after long conversations with Philippe, a fellow classmate.

From this basic concept, we barely had a month to develop a working prototype, write a business plan, interview industry experts, prepare a pitch and record a 10-minute video. A week after submission, we learnt we had two weeks to prepare for the UK finals. We worked relentlessly to improve our technology, and spent days rehearsing our pitch and preparing for potential questions.

Microsoft was very supportive during that process and gave us help on developing our technology as well as putting us in contact with a mentor. Our mentor, Natasha Allden, was extremely helpful, and it was very relieving to see her so excited about and engaged with the idea. She quickly understood our objectives and advised on a best route to market.

If there is any advice we can share to budding entrepreneurs/tech geniuses out there, it’s this: It is interactions like these that make your idea progress. Having the opportunity to speak to someone who has gone through the same process as you is worth a thousand hours of brainstorming and staring blankly at your screen trying to come up with solutions to your problems. These discussions are very important, and it is participating at events like the Imagine Cup, and talking to companies like Microsoft, that make them possible. 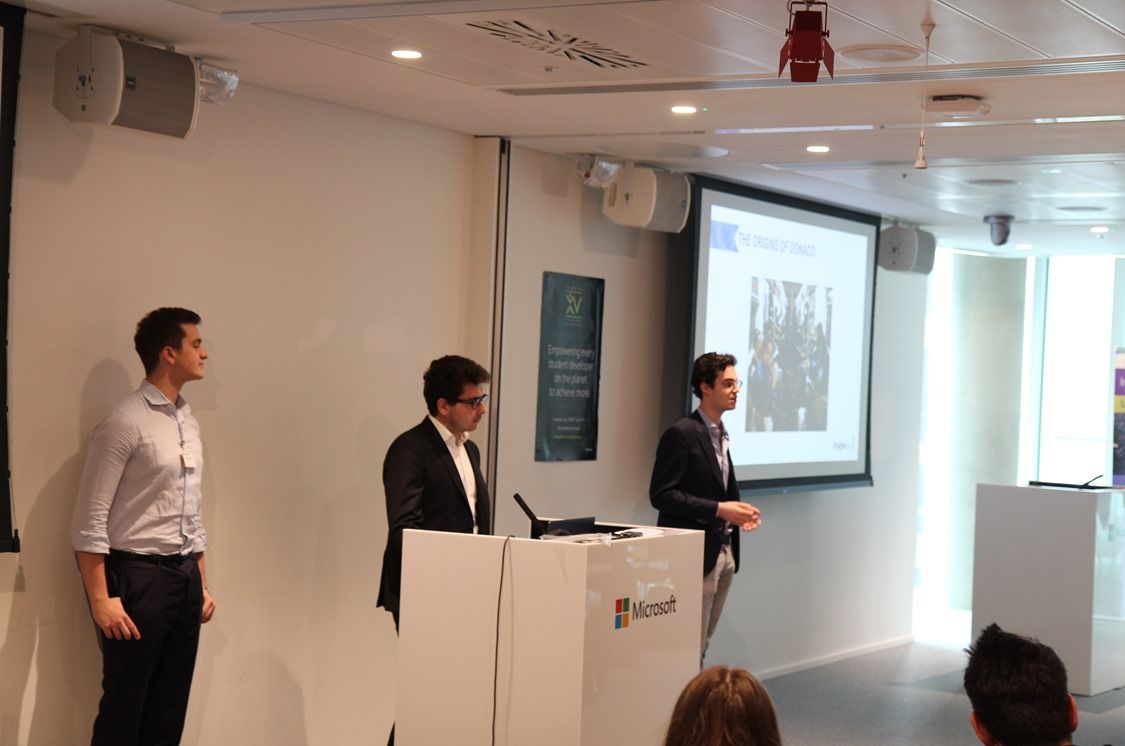 It was then time for the UK finals at the Microsoft Paddington offices. Honestly, that day was pretty awesome. The offices were cool, the people even cooler (seriously, everyone was so nice). When the day started, the only thing we could think about was our pitch and making sure we were perfect. Saying that we were nervous is an understatement- after twenty minutes of talking about the pitch and Donaco, we decided we wouldn’t survive the day if we remained this nervous, and decided to go talk to other teams. It was these discussions that made the day so special. Meeting so many different people, discovering what the other teams had been preparing, and seeing their technology was both impressive and inspiring, and it reminded us why we wanted to work in the technology sector in the first place: the possibilities are endless.

We also had the chance (or the misfortune, it depends on how embarrassing we’ll be in the finalized video) to do something we never did before: interviews in front of a camera! We spent more time laughing at our answers and feeling ridiculous than answering the questions- at the end of the interview, we joked about it to the person filming us and he answered that it didn’t matter because he wouldn’t be necessarily using footage from our interview. After we won, he came to us and said, ‘Well now you’re in real trouble, because now I’ll have to use your footage!’

Another great thing about the Imagine Cup is the exposure you get. We got to talk to so many people, tech experts, investors and entrepreneurs, people we could never have met otherwise, who each brought a different perspective to our idea. Talking to the judges about our idea was definitely the highlight of the day. We are grateful for the opportunities the Imagine Cup has given us and look forward to the World Finals.

Overall, the message we are trying to get across in this article is this: do not underestimate the power of competitions and events like the Imagine Cup. It is very easy to come up with an idea and build a small piece of technology by yourself; however, finding the right path forward, finding the motivation to push forward and to remind yourself that you always need to do better isn’t. It is by meeting people with the same passion, with more experience, and who are willing to help, that you can steer yourself in the right direction. And it is by participating in competitions like the Imagine Cup that you can meet these people. Winning is only an additional reward. Thanks to the Imagine Cup, we went from an idea to fully thought-out business model with a demo in under a month. Today, our idea is evolving into a company, we are learning to take our first steps in the entrepreneur world and we are being approached by charities who are interested in our service. All of this didn’t happen because we won, it happened because at every step of the way, Microsoft was there to help us, and we were willing to take everything they had to offer us.