Part of the course is a group based project. Each team propose a challenge and develop all the software to solve the proposed problem.

The following is a review of team project, the team composed of Carlos Medina, Dhama Lancelot Martinez, Mario Refoyo and Patricia Gómez who proposed a Smart Water pipes monitoring solution.

In the era of high technology, the speed of developing solutions to make our lives easier is increasing exponentially. In this way, a common problem to tackle is water leaks. The need not only to identify where and when exactly the leakage occurred but to also fix it can be a tough task as it often demands two factors that are limited: time and human resources. Following this premise, Internet of Things positions itself as the proper technology to address this issue taking advantage of Cloud computing capabilities. For this purpose, a smart water pipes monitoring system is proposed using Microsoft Azure as its core. 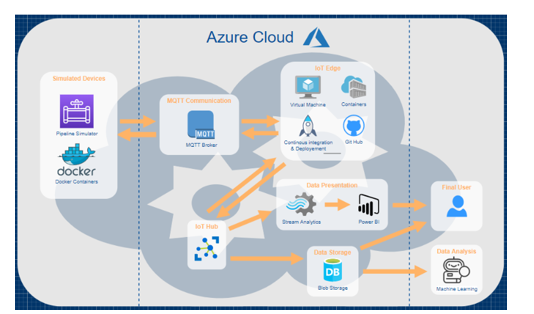 This monitoring system proposes a pipeline sensed by flow meters, which send measures through MQTT to an edge node. The intelligence of the system resides on this node, which computes the difference between consecutive sensors’ measures and detects through a flow difference threshold if there is a water leak and on which segment of the water pipe it is. If it detects one, it sends a command to close the necessary valve.

The system offers six functionalities through a robust architecture where Azure services have been implemented:

Finally, this project is a demonstration of how Internet of Things technologies can be integrated with the latest Azure services to build smart systems that real scenarios demand.

Resources and next steps

If you interested in learning more about IoT and Azure we have a set of Microsoft Learn modules which are free modules and hands on labs for educators to utilise as blended learning resources.