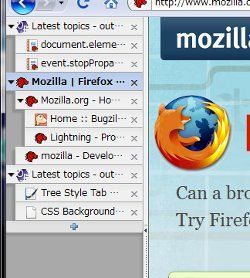 Thank you for the suggestion @fedupwithusernames (I love the name, I totally agree with the sentiment). I will forward this on to the tab management and user experience teams.
7 Likes
Reply

Good spot. Yes, I found that during the week and hadn't got round to posting. It proves it can be done within the browser.
1 Like
Reply

This is absolutely my primary reason for using Firefox and for despising Chrome.

I have no doubt that if Microsoft does this ONE thing well, it will immediately make a huge difference in the uptick in browser market share.

Again, Microsoft, do this and make your core IT people (aka mavens) actually _want_ to use the new Edge.

Same here. Aside from my appreciation of Rust in the codebase, the only thing keeping me on Firefox is the tree style tabs addon's capability.
0 Likes
Reply

It lost its paid for abilities in Edge, Edge beta and Edge Dev, because it cannot cope with the updates to Edge, saying it is not registered. It was a chrome add on, and Microsoft say there may be issues.

I still use it a lot in Chrome (+beta +canary) which have therefore become my goto browsers instead of edge. Sadly the developer seems to have gone missing, having been responsive. That means the paid for version can save the tab tree to the cloud, but not restore it. It is a minor irritation solved by saving locally to a pondering folder so it syncs across my computers.

Firefox is still a goto browser but because tree style tabs needs the tabs open to work well, it gets to cluttered. With tabs outliner, it is like having a tree of dynamic favourites that remember the last page used on a site.

Please Microsoft - if one lone developer could do it.... surely it is easy for an organisation like yours.

Count me in on this!

I just created the Tech Community login for the sole purpose of supporting this suggestion!

It is beyond my understanding why "vertical tab trees" are not standard in 2020 and not supported by every browser. For me TreeStyleTab is the only reason to use Firefox as main browser.

I mean... Monitros get wider and wider, but it seems no browser wants to utilize that extra space. It makes organizing and keeping track of your tabs so much easier.

Hey guys. I have a little surprise for you. Over the quarantine I've been working on a little something that I've been wanting forever - Open Tree Style Tab. As a previous TST firefox add-on myself, I realised the options available on the store just wasn't up to par with the experience I had with the original add-on. So I created the version that I would have liked personally as well as utilising all the functionalities available provided by the browser. The project is and will continue to remain open-sourced, I'm excited to improve it everyday and if you have any feedback, let me know!