The new edge active tab is lighter than the other tabs and looks similar to chrome, however, if it were like the original edge, it would add personality to the browser.

The original edge uses shadows to make the active tab appear to pop out a little bit from the other tabs, which is only helpful with 90 degree angles, so this would be nice to implement at the same time. Another part that made the dark mode so attractive is when the mouse hovered over an area, that area would lighten up a bit.

Tabs also were able to slide under each other. 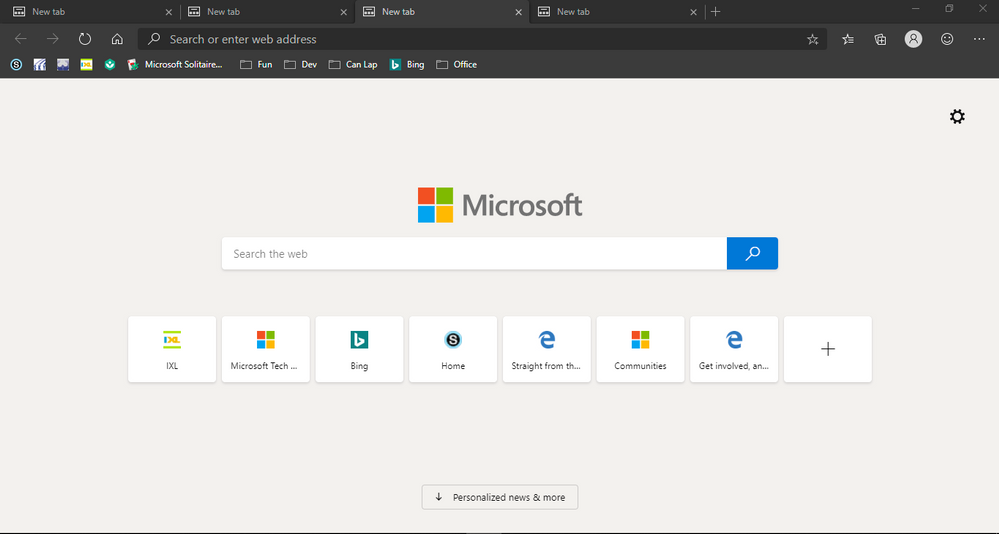 Edit: the last tab has been turned dark for a while now.

I don't know. You can try this popular extension: https://chrome.google.com/webstore/detail/dark-reader/eimadpbcbfnmbkopoojfekhnkhdbieeh

Somehow I think making the UI as close to the original Edge should be the top priority in the new Edge. It still looks like a slightly reskinned Chrome...
18 Likes
Reply

@Deleted The Dark mode regardless of texture etc. is a godsend to me personally as with the darker screen and white lettering it is surely the best option and in my case, (very poor eyesight) it is a no brainer, so needless to say it is is an assett regardless, but it would be cool to have say variable darker colours, (dark Blue, Deep Red and the like) just to jazz it up a tad perhaps! It is an absolute necessity to me!

That's a good idea. I think that there are themes in the Microsoft store (the chromium one) to change the tab/omnibox bar colors. I know in Firefox there are even pictures you can insert there, but I haven't checked the store for edge to see if that's available yet.

My idea was to make the background of the "focused" homepage available in different colors, because right now its only available in white.

I'm going to go into more detail here on the colors to homepage. I already posted this, but can't figure out how to link it, so I'm posting it here as well.

I used Inspect element to add different colors to the new tab page, and think Microsoft should consider this. @Elliot Kirk.

This is the current default dark theme for the focused NTP:

This is the default dark theme

These are the new ones:

I'm colorblind and can't see purple(it just looks like a different shade of blue. I'm told I can't see the red. I wouldn't know) so I didn't bother trying to find it, and I apologize if the blue is actually purple.

@cjc2112 I like they sky blue...that's an awesome color background.

1. I find when hoovering things do change such that it is quite noticeable, to me.
2. You can move the tabs laterally, the same as w/ Edge.
3. If the OS is set to Dark & certain OS Accent colours are used one can have very good contrast across the Edge C top bar.

I hate the fact that tabs slide under each other in Edge Spartan. It makes me so frustrated. I love the way Chromium handles tabs

I agree on the appearance of tabs, the hover effect on tabs and the omnibox in dark mode though!

I love it! Similarly, Google Chrome has NTP customisation with a colour picker! It even themes the browser!
0 Likes
Reply

I love this suggestion because it offers clarity to each tab, flexibility to the user, it brings some of the nicer features of "Classic Edge" to Edge Chromium and yet differentiates Edge from Chrome.
3 Likes
Reply

@Woodykirk Today, they changed the dark omnibox from pure black to light gray and its annoying to see the lack of contrast after knowing what it was before.

The dark option is of little use@cjc2112

Dark Mode may not be useful to everyone, and many casual users may only discover it by accident, but it can be a particularly useful option.

I like to switch to it at night sometimes, or when using a smaller device outside in bright sunlight.

I have a friend who simply prefers the look and is very pleased to now be able to switch Windows 10 to Dark Mode and have apps match it as well.
2 Likes
Reply

It's (visually) more attractive than blazing white, it's relaxing & primary reason, it's easy on the eyes.

And rest assured, your friend is not unique, not alone, at all; MANY Countless numbers of us were and are very pleased, indeed:exclamation_mark: The more widespread it's become the more pleased we are

@Drew1903 Yes, I use it to save battery, reduce strain on my eyes, and because it looks prettier. Some people like light mode and sometimes I do too, but I use dark mode much more frequently and, as a rule of thumb, the darker it is the better it is in my opinion.

@cjc2112 totally support! I always confused about which tab is active now in dark mode, it would be great to make it more contrast or at least give us legacy Edge UI.

To repeat: If certain OS Accent colours are used/selected there can be oodles of contrast and tabs super easy to see/notice. Trust me, I'm telling you from first hand experience, it does do the trick!

Here is an example I grabbed quickly, just an example;  Because, the quantity of colours available that work is HUGE! And showing active & non-active tabs... actually, I often change it depending what desktop wallpaper I feel like using, for a while and also, changing the pointer colour & the clock such that everything is coordinated, ascetically.  The clock is highly customizable, in many aspects, BTW!

In other words, the effect varies depending on the OS Accent colour.  And you tell it to show in title bars & window edges.  If you go with Dark Mode/Theme & the default stuff for what I have discussed above, it WILL, indeed, be darn hard to have the tabs jump out at you.

I don't like accent colors and never use it, it's ok with just dark colors in OS to me and good old Spartan Edge. But it's a disaster with chromium edge dark theme and I shouldn't be forced to use accent colors.
3 Likes
Reply