I have a problem in Edge Canary (but not Dev) ... I'm sure I must have done something without realising it, but I can't figure out how to undo it.

I don't often use the Developer Tools (usually just to grab an NTP image of the day I like), but when I do I'm now missing the last few entries in the Dev Tools pane menu bar.

I DO still have (left to right):

All those 4 are missing in my Edge Canary DevTools menubar/toolbar ... it's especially annoying not having the Close.

Can anyone tell me how to get those back in Edge Canary?

this is for me

OK, this is a snipped screenshot from my Edge Dev on this page on this forum with the DevTools open, then the same in my Edge Canary. You will see that below the Edge Toolbar and favourites bar is the top toolbar or menu bar, whatever it is called, of the DevTools. Note how in the Edge Dev version (top), to the right of the double right arrow (a dropdown menu for the other tool tabs there isn't space to show)  there's a space, then two  error indicators, a feedback button, the Customize and Control DevTools three dot menu and a close button. But on the Edge Canary one there is nothing to the right of the double right arrow for the dropdown menu of more tool tabs, although two more tabs - performance and memory - are showing as there's all the extra space from not having those other warnings and buttons. What I want to know is how to get the Devtools menu bar in Edge Canary to go back to looking like the one in Edge Dev, as I don't know what I may have accidentally done to remove those buttons.

Oh yes ... your screen shot appears to show you also missing the items that should be at the right end of the DevTools menu bar. Just as a check, I've tried in Google Chrome and Google Chrome Beta, and they both do have them (without the extra send feedback button), like my Edge Dev but unlike Edge Canary. While some of the functions are accessible without them through keyboard shortcuts (which I hate), others are not.

Well the best option to get them back to default would be to fully uninstall Edge canary (select delete user data during uninstall when asked) then reinstall it again..
0 Likes
Reply

Well, as you are missing them too in your screenshot above (that was Canary you did the screenshot of?), that makes it more likely it's a bug in current Canary rather then my having accidentally hit some keyboard shortcut I'm not aware of that turned them off. So maybe I'll wait and see if they reappear when Canary updates resume after Christmas. I can always use the DevTools in Edge Dev in the meantime if it matters.

Yes sure, i hope we get an update today, it's the 3rd day without update..
0 Likes
Reply
Anonymous
replied to  HotCakeX

@DavidGB Thanks for letting us know, I'll check in with the team and loop back with you if they have any additional thoughts.

@HotCakeX Updates will be limited as our devs take some time to be with their families for the holidays, but we will let you all know as soon as we're back in full-force!

Thanks. I did actually report this with the 'send feedback' yesterday, with an annotated screengrab showing the Edge Dev and Canary DevTools toolbars one above the other and showing how the Canary version is missing all the right-side buttons that are there in the Dev version.

@DavidGB Great, thanks for submitting that!

Yes also in Version 81.0.375.0 (Official build) canary (64-bit) these options now appear that lets us change the location of the developer tools 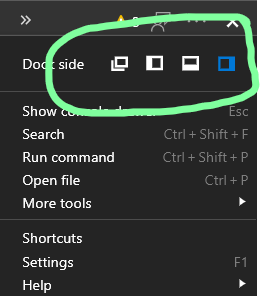