How to remove the "discover" button?

How to remove the "discover" button?

After my microsoft edge dev updated to 111.0.1619.2, there is a "discover" button on the top-right corner of the browser window, which is VERY annoying. Each time when my mouse hover on it (even without a click), the discover menu and sidebar pops up. How can I remove this "discover" button? 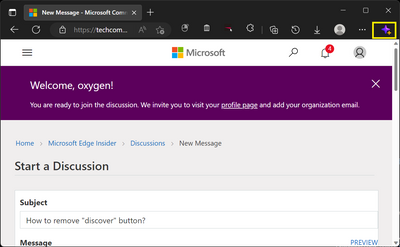 Re: How to remove the "discover" button?

Thanks, it started driving me crazy right away, especially that hoovering activates, but also because the button doesn't even act as a toggle to reverse its offense. This implementation could never arise when its developer is motivated by, or merely shows deference towards, making the UI user-friendly—instead of being able to dismiss the sidebar after opening it (whether the result of, most-likely, an errant click, or of intentional activation) by simply clicking the mouse a second time (or first time, if activated from by mere hoover), I'm required to, after recovering from the shock of its unintuitive apparition, shift my gaze to the bottom of the window, locate a small icon, guide the mouse to within its activation zone, and, finally, click. The remote possibility of this functionality being acceptable, perhaps due to other interference with other aspects of the UI's scheme (and it is hard to imagine), is entirely foreclosed by the fact that the button has only one function—it opens the bar. This, combined with its oddly obscure tooltip label, presented after hoovering an identical duration to what is required for activation (clearly, they didn't want you to be able to find out what the button does before forcing accidental activation, though, I can't foresee any confident understanding of what to expect arising from reading that label), might lead one to conclude that, far from being indifferent towards the UI, the developer was quite concerned: it was just that his objective was to impose the sidebar on the user by surprise and then frustrate both, his attempts to dismiss it, and his ability implement preventative measures to avoid recurrence. Indeed, every aspect of the implementation that I can think of is consistent with that aim, but it is hard to imagine any of the design choices I mentioned resulting from a motivation that was, at least, not patronizing, and, if the button can't even be dismissed, I'd lean heavily towards it being malicious.
6 Likes
Reply

Re: How to remove the "discover" button?