Hello Insiders!  Today we’re releasing build 99.0.1150.2 to the Dev channel, and as I mentioned last week, this is the final build for version 99, give or take a patch or two.  We’re also excited to announce that Selenium’s Internet Explorer Driver now works with IE mode; you can read all about it here:  https://blogs.windows.com/msedgedev/2022/02/01/test-ie-mode-in-microsoft-edge-internet-explorer-driv....  As for all the new and exciting product changes this week:

As always, since this is the end of 99, you should look for it in Beta soon!

@josh_bodner I can't find any settings for:

I also do not have any options for finding related matches. Screenshot attached. 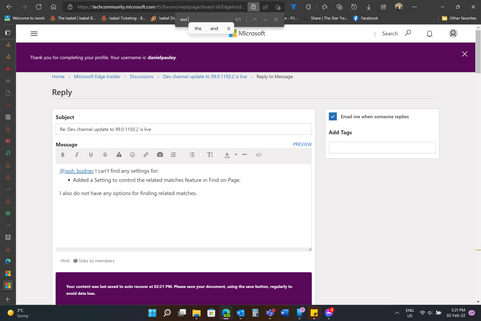 Thanks for this release. It seems to fix my problem with high cpu/gpu usage on linux with integrated graphics card. Laptop is quiet now
1 Like
Reply

Hey Edge team, can you please give us an update on the vertical tabs Fitt's law issue? Here is the discussion for it https://techcommunity.microsoft.com/t5/discussions/vertical-tabs-should-be-consistent-with-fitts-law...
1 Like
Reply

We just made a fix for it, so it will be in either tomorrow or Monday's Canary!
1 Like
Reply

Just found your post by accident and used Edge Feedback to add my voice, which is in my opinion also an accessibility issue. I did not know Fitt's law, but the gap is bad. And it is even not consistent. The "new tab" button honors Fitt's law.

Thank you for your persistence on that topic.

Thank you! Would you please post in that thread so the Edge team realizes it's not just me? They seem to think I'm the only one bothered by this issue. I also found a reddit post about it and included it in that discussion https://techcommunity.microsoft.com/t5/discussions/vertical-tabs-should-be-consistent-with-fitts-law...
0 Likes
Reply

PS: you might consider building the dev versions with symbols. Would help yourself making sense of the stack traces. Did you know you can these days supply compressed symbol files for Linux?
0 Likes
Reply

Just want to add to the count. The privacy tab is also not working for me and is experiencing errors in the debug tools. The page is staying blank and I can't change my settings. I'm experiencing this on the edge-beta build 99.0.1150.11 on Pop!_OS 20.04.

We just made a fix for this in this week's Dev. Let me know if you're still seeing it after updating!
0 Likes
Reply

"Use secure DNS to specify how to lookup the network address for websites" STILL not working..