Hello Insiders!  Today we’re releasing build 90.0.789.1 to the Dev channel.  Before we get into the changes, we wanted to make sure you knew about the latest status of our password management feature within the Microsoft Authenticator app.  We’ve got all the details here:  https://blogs.windows.com/windowsexperience/2021/02/05/simplify-and-secure-your-life-with-microsofts....  Additionally, for enterprises and IT managers, we know you’ve been eagerly awaiting our kiosk mode work, and we’ve got an update on that here:  https://blogs.windows.com/msedgedev/2021/02/05/what-you-need-to-know-about-kiosk-mode-when-support-f....

Now, for everything in the product:

As always, we couldn’t do this without all the valuable feedback you provide!

I see it mentioned web widget available on Edge 88 Windows. that Edge version is on stable channel right now.

does this mean that Edge stable is running this experiment?

is web widget in its current implementation (which i tried on Canary) is the final form? because I see lots of things wrong with it and sent feedback for each of them.

is it going to come to other platforms too?

it's never been officially introduced to us on the community.

Clicking to restart after updating Dev gave me a BSOD computer crash, which is very rare for me with Windows 10: thanks for that.

After trying out the new download UI this last week, unlike the old one it is .... acceptable. (Not as good as it could be, though. In Firefox, clicking on a download link causes the open/save dialogue to open right under the pointer, wherever that happens to be, rather than having to hike over to the top right every time; and Firefox has a section in the settings for 'Files and applications' where one can see all the filetypes that have ever been downloaded, what action is currently set for that filetype, and a dropdown menu for each filetype where one can the currently set action and change the action to any out of always ask (default), always save, open in browser, open in Windows default app for the filetype, open in specified other app, as applicable to the filetype ... which is much clearer and more useable than the current state in Edge.) And now that the downloading UI is acceptable again, that moves desktop Edge back ahead of desktop Google Chrome again for me.

BUT I require desktop and Android browsers that sync. And while desktop Edge is, for me, acceptable and better than desktop Chrome, ANDROID Edge is still completely useless, with development non-existent over the whole last year in the areas that matter to me. There's quite a few issues that cumulatively weight against it (and it's STILL reporting itself as Chromium 77, when Android Google Chrome and Firefox are both the same versions as their desktop big brothers - what are your Android Edge devs playing at?); but a single issue that alone makes it completely unusable to me is that it STLL doesn't have an equivalent of Android Chrome's darken-websites-checkbox-in-themes-setting or (much better as it will remember per site settings) Android Firefox's ability to use the Dark Reader extension (one of the 6 extensions they considered vital before the first standard build release). I have become very sensitive to bright screens over the last two years and I simply CANNOT browse with Android Edge because of all the sites I want to browse to that have bright white backgrounds. (Oh, and Android Edge Beta has a grand total of ONE flag available, whereas Chrome Beta has over THREE HUNDRED.)

So, while I consider Android Google Chrome to be scruffy and rather chaotic with very indifferent performance, I still can at least use it if I have to. I just cannot use Android Edge at all. So I remain where I was, browsing with Firefox, on my laptop and on my phone, with Google Chrome as the rather unpleasant but at least useable backup on the odd occasion I need a Chromium based browser. And it will stay like that UNLESS you pull your fingers out and make Android Edge at least minimally useable. Get Android Edge AT LEAST with some darken website ability and Edge will move above Google Chrome for me, and might end up supplanting the Firefoxes as my browsers of choice. If you go on and on neglecting Android Edge, desktop Edge remains a pretty but useless toy. Desktop and Android versions stand and fall together.

These days a lot of people start with what they use on their phone to then choose what they use on desktop/laptop, NOT the other way round. You are really handicapping desktop Edge adoption with the pathetic state of Android Edge. (Of course if you made desktop Android able to sync with Android Firefox ...)

Thank you very much! 60 fps playback works on YouTube for me now. :) Was one of the things I gave feedback on previously. Ubuntu 20.04.2
0 Likes
Reply

@josh_bodner This update seemed to fix the issues where I wasn't seeing the awesome new improvements made in the last version (i.e. new downloads menu, collections menu, etc.)

@josh_bodner When MS Edge Linux version will have the ability to login and syncing data? 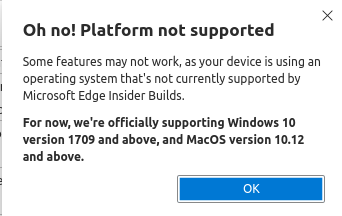 @josh_bodner I still didn't get mobile history sync that was announced a few weeks ago in v89. Tried signing out of everything except one laptop and doing the reset sync thing, but nothing. My mobile still shows Open Tabs and History as greyed out options in Sync... Already submitted feedback and complained on the channel update for v89 (the one that announced it), but still nothing.

I also didn't get the vertical tabs when the 100% rollout was announced, only got it like, 2 weeks later, I think...

@HotCakeX a feature rolling out even in stable doesn't mean it's in its final form.  Some of the work on the web widget specifically will also be coming in future Windows updates, so expect this to continue to evolve for a while.  For example, the Windows Insider blog has a look at some of the upcoming work on their end:  https://blogs.windows.com/windows-insider/2021/01/06/announcing-windows-10-insider-preview-build-212....

@josh_bodner Jerky up/down scrolling on touchpad and touchscreen for all pages, including in Reader Mode. This did not happen with previous build. Enabling/disabling de-jelly in edge://flags does nothing.

I just wasn't expecting something not finished/final show up on a the stable channel,

I have news and interest on Windows insider build, one of the major problems with it and this web widget on Edge is that they both act like a picture. everywhere you click on, a browser tab opens.

they both don't have the capability to open anything in themselves.

like when I click on a news article, I want it to be opened in web widget and not a regular Edge tab.

or when I click on show/view more at the bottom to reload more news, when i click on weather, when i search something in the address bar.

hope when they are finalized they will be able to do these things I'm expecting.

@josh_bodner With this update users have been experiencing crashes whenever the New tab option is clicked or in some cases when it is originally launched. If the Dev browser does open successfully on the initial launch. The workaround to open a page can be done by rt-clicking on the icon in the task bar and selecting a website from the recently closed.

@foo_bar is this still happening after today's Dev update?

@josh_bodner Replying to your message from version 89.0.774.4. Yes, it is still happening, even in the current build. I am talking about the "Restore pages" dialogue box that is shown on first launch of Edge after Windows start-up. I guess I have figured out the cause. This problem arises probably only if startup on login is disabled for Edge. I enabled it from the Task Manager and then Edge opened normally after a restart. This shouldn't happen. Edge should work normally even if auto-startup is manually disabled for it. If you say, I'll send this as a feedback via Edge's Send feedback option.

PS: Just saw the systray Edge icon and it had an option to let Edge run in background which I turned off. Doing so seems to have removed Edge from the startup apps list. Will see what happens on next Windows startup.

PPS: The issue seems to be have been resolved. But still, it will continue to occur if one manually disables auto-startup for Edge.

Hey, thanks for the update!

I posted feedback yesterday and it is still present today: Since the last update when opening non-https websites (local servers, etc.), the Browser process takes up consistently between 80% and 90% processor (not a tab or an extension).
0 Likes
Reply

Oh wow, if i was one of the Edge developers and read this, i would go crazy lol because previous weeks everyone was asking to hide site titles and only show icon.

but I guess they need to add a button or toggle for everything in the settings so satisfy everyone, that's the way to go :)

@josh_bodner
Can you guys have a look again at syncing favorites between Windows & Android devices?

For my Windows PC's & Surface tablet it all now is a match between stable and dev releases, but favs are still a mess on my Android phone and tablet.
Deleting the app and reinstalling it is the only way to sync it again with the latest correct set of favorites.
That becomes tiring after the 3rd or 4th time ;)

Android Edge seems to be stagnant in development.

2. Collection should have an option to be opened in a new tab for easy management.