Hello Insiders!  Today we’re releasing build 84.0.522.5 to the Dev channel.  We expect this to be the final build for major version 84, give or take a few small patches past .5.  In community news, we’re excited to share an overview of our surf game to celebrate its arrival in Stable after Stable’s recent update to major version 83:  https://blogs.windows.com/msedgedev/2020/05/26/surf-game-edge-stable/.  The surf game was originally the final part of the hidden journey to unveil our new logo last November, and now is a fun game you can play if you ever find yourself offline (or anytime!)  We also posted about the improvements we’ve been making to spellcheck:  https://blogs.windows.com/msedgedev/2020/05/28/improved-spellcheck-microsoft-edge-83/.

In product news, we’re excited to announce that Read Aloud is now available in PDFs!  We put together an overview of it here:  https://techcommunity.microsoft.com/t5/articles/microsoft-edge-read-aloud-now-with-pdf-support/m-p/1....  We also have a small preview of what to expect from Sidebar Search here:  https://techcommunity.microsoft.com/t5/articles/introducing-sidebar-search-in-microsoft-edge/m-p/140....  In other news:

Thanks to you, look for this build to be heading to Beta soon!

No, there is no update on my browser, still waiting. @josh_bodner
0 Likes
Reply

@josh_bodner That feature to take you back to the text added to a collection is awesome! It's such a cool feature I'm surprised it wasn't called out as a NEW tile on the page that opens when after the browser updates telling you what's new.

Also... any idea when that crazy squished tab known issue will be fixed? It's been around for a couple builds now.

@josh_bodner on the subject of Collections,, I would really appreciate if there was a way to expand the sidebar to a full page to easily manage Collection contents. As it is right now, it feels pretty cramped for more than a few handful of items. Once the amount of Collections and items grows, it becomes tedious to manage. It's good for a quick glance though.

Tried out READ-ALOUD with a PDF - a bit hard with hyperlinks embedded in any file, to select stuff - suddenly, you're at page 11. Also, in any application that has defined keystrokes, like MS Word, Ctrl+Shift+U is problematic - it just underlines the text. To highlight, right-click is preferable. Strange, voices - in a browser, the voice is female; in a PDF, it was male. Assuming that it will be possible to select a voice in Windows 10 appropriately (US accent is a bit grating for Aussies).
0 Likes
Reply

@josh_bodner I was just wondering when are the Vertical Tabs featured that was annouced at Build coming to the Insider releases specifically the Dev channel.

@josh_bodner Loving the new Edge and all you guys have been doing over the last year. The squished tab thing has been around for a few releases now and is very annoying - be great to have that one sorted as a priority.

The following behavior still not changed: I have configured to open specific pages on startup. But also, an additional tab (start page) always opens along the defined pages. This is not expected behavior I guess...

Maybe you can look into this...

edge://surf still consumes a lot of GPU and CPU resources

@josh_bodner I can confirm HEVC is now playing as expected, compared to the last dev build. Thanks for looking in to it!

I can confirm that. The problem is, that the NewTab page is the one that is focused on open.
0 Likes
Reply

I can make the main browser window full screen, but not apps :frowning_face:

@josh_bodner, profile switching is now back to working as it should. Thanks Edge team for the quick fix. :thumbs_up:

@Joshua_HV squished tabs should be fixed in today's Canary, which hopefully means the fix will also make it to next week's Dev.

@WesternWombat_99 you should be able to change the voice with the voice options button on the Read Aloud bar: 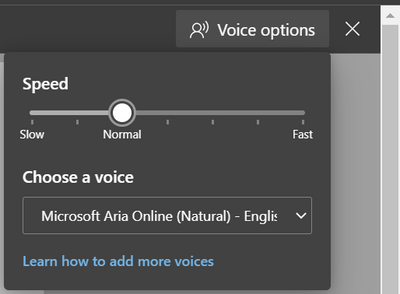 @cloud_entropy does this only happen with your current profile?  In other words, if you add a new profile to the browser and try to set some startup pages, does the extra tab also appear in that new profile?

@KibosJ Thanks for finding this, I'll make sure our web apps team knows about it!

I just filed the feedback