Hello insiders, we’re hoping to get back on track by releasing build 83.0.467.0 to the Dev channel.  For our other channels, we’ve posted an update to our blog post here:  https://blogs.windows.com/msedgedev/2020/03/20/update-stable-channel-releases/.  It outlines our plans for Beta, which will skip version 82 and then see and update straight to version 83 later, as well as Stable, which will soon be updated to version 81 in order to align with Chromium’s release schedule.  Additionally, we announced an update to our TLS 1.0/1.1 deprecation plans for Edge Legacy and IE here:  https://blogs.windows.com/msedgedev/2020/03/31/tls-1-0-tls-1-1-schedule-update-edge-ie11/.

In more fun news, we released a new teaser video here that shows off some upcoming features like Line Focus in the Immersive Reader, Vertical Tabs, and Give with Bing:  https://www.youtube.com/watch?v=yg5cUyPBHjI.  We also wanted to make sure you know that we really do read your feedback:  https://twitter.com/MSEdgeDev/status/1244684674166710273.  As for the most noteworthy additions over the last few days:

Thanks for hanging with us as we had to deviate from our usual pace over the past couple of weeks!

Very pleased to see inactive tabs using the Windows accent color again in Dev as well as Canary. You are still referring to disabling the edge://flags/#edge-experimental-scrolling flag as a temporary measure to use: I still believe you should turn it into a setting - something like 'Touch screen scrolling' with an on/off switch. For me, on a non-touch-screen laptop, the scrolling behaviour with that flag disabled is exactly what I expect, no more and no less. Keep it with a setting. Don't try and make a one-size-fits-all scrolling for both touch screen and non touch screen; it will end up falling between two stools, good for neither. I never used Classic Edge for a number of reasons, amongst which the to me horrible scrolling behaviour was one, with all that bouncing off the bottom and the top of a page. Even if you get the 'experimental-scrolling' in new Edge just like old Edge, for me it will still be one reason not to switch to new Edge from my current normal browser (there's no question of me deciding to switch until you have history syncing between laptop and mobile Edge). Scrolling is just not supposed to be like that on a non-touch Windows laptop/desktop. Keep the current experimental-scrolling as an OPTION for touch screen users, and keep the current experimental-scrolling OFF as an option for non-touch-screen users that doesn't need diving into the flags page. Options are good; options are a selling point. Forced no-option funky behaviour is bad.

Hey @josh_bodner!
Sorry to bother you with this again, but any news on the "allow sign-in while running as an admin" feature? I don't see it on the planning posts (from MissyQ), not even in a 32-week horizon. Thanks!

@josh_bodner "Fixed an issue where inactive tabs no longer use the Windows accent color if it’s set to appear in title bars." Ha, very interesting. I was wondering if that was a glitch or a design choice. Nice to see it back to normal.

@josh_bodner Hey, I just want to mention how excited I am about vertical tabs. When the new Edge was first announced, I was afraid it was going to be a Chrome clone, but everything from Collections, to tracker blocking, to menu design, to the upcoming vertical tabs has put those fears to rest. This will help set Edge apart, and it also shows love to desktop users with big widescreen displays (at a time when many developers just care about mobile).

Randomly, Microsoft Edge Helper is hogging all of my i9 CPU.

It's only renderings for videos, but I like the layered look they show. It feels like a modern version of Windows 7 Areo theme. 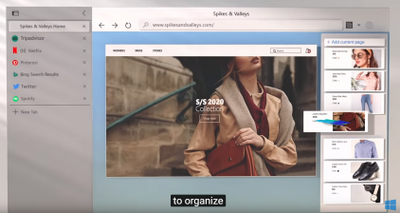 I keep hoping there will be an improvement to the active tab when using the dark theme. When Edge has the focus, the active tab is basically the same as the other tab:

When Edge does not have the focus, it's much easier to see the active tab:

Yeah, I like the "cards" they use in the UI for the various elements.
0 Likes
Reply

@josh_bodner It's me again. The vertical tabs got me thinking, because I was curious how tied the Edge UI is to its Chromium underpinnings. Not being a developer, I really don't know how it all works. But if MS can devise something as dramatic as vertical tabs, they clearly have a great ability to redesign things to their liking, despite using the Chromium base. So (and maybe this isn't the best place to put this, but I hope someone gets the message) this means MS could definitely implement tab switching in recently used order. Chrome users have been begging for this for years. If Edge can do it, it'd be a seemingly small but clear signal that they really care about desktop users. Please! :folded_hands:

Thank you for the tab accent colour fix... it was driving me nuts!
0 Likes
Reply

@josh_bodner I've reported this bug via feedback but want to post it here for visibility. The Dark Reader extension is starting to have high CPU usage since this update. I think the update broke it somehow.

Yes I'm facing this issue too but I think its because of Dark Reader extension. I think this update broke that extension and am seeing CPU usage above 25%
0 Likes
Reply

Is that something built in? As I don't have that extension.

@Mapantz interesting. So when I have the high CPU usage and I delete that process from task manager I get a balloon pop up saying that dark reader extension has crashed. That's why I thought the update might have broken dark reader extension. Could be a different underlying issue too then

When I open the task manager and delete the process, one of the tabs I have open says it has crashed.

Yeah, after using it for a while with the dark reader extension removed, I still encounter high CPU usage. But when I kill that task I don't seem to get any crashes.
0 Likes
Reply

Here's what happens to webpages for me when I kill the process that's using silly amounts of CPU.