Hello insiders, today we’re releasing build 79.0.309.5 to the Dev Channel!  You may notice that this is only one build away from last week’s Dev, and that’s because this is our candidate for our next Beta release, so we want to make sure it’s extra polished before we release it there.  However, that also means it’s a pretty light week this week in terms of notable changes.

We do have one known issue right now, where Edge sometimes launches to a blank white window.  There are two possible causes.  If you launch another window and it’s fine, you shouldn’t ever see the issue again.  However, if subsequent windows are also blank, you’ll have to disable Application Guard in order to get Edge back into a working state.  We plan on releasing another update later this week in order to get us in sync with Chromium’s Beta, so the fix for that cause should be in the updated build.

We’ll be back to normal next week, and it’s also Ignite!  Will we see any of you there?  In the meantime though, thanks to everybody who’s been using Edge and telling us everything you do and don’t like about it.

@josh_bodner Unfortunately, multiple desktop support has become worse since last week's dev update. When you open a link from another app inside a virtual desktop where there is no Edge window, instead of opening a new window what happens is that you are thrown into an existing window inside one of the other desktops. I find this a pretty strong regression and think it should be fixed for a beta build.

Apart from that, the only issue I have with Edge right now is how the taskbar icon and the start menu icon are strangely "disjoint" - i.e. they are not the same, so the one on the taskbar shows "pin to start" as an option and the one on start shows "pin to taskbar" as option, for some reason. This also means that their jumplists are out of sync. However, from what I can tell this is already an issue with the current beta.

Apart from that, I find the new Edge to be a fantastic experience and it's been my default browser since the first dev build. Keep up the great work!

The caret browsing is cool.  Having Add notes

will be, even, cooler. Just a matter of time, to be sure, since, I, already, know it is coming.

Yes add notes (or Web page inking) is now added in the list of the features being reviewed by the developers. more info:
https://techcommunity.microsoft.com/t5/Discussions/Top-feedback-summary-for-October-29/m-p/963887
3 Likes
Reply

I assume the next version will be on Edge80?

@josh_bodner When is the next beta expected to drop?

I think the next beta update (version 79) will be around November 6th, because the last one (version 78) was released around September 25th and since the update cycle for beta channel is every 6 weeks, I assume that should be the correct date :)
0 Likes
Reply

Ahh thank you. I completely lost track of when updates were pushed because of this 6 week cycle
0 Likes
Reply

@josh_bodner Love the new edge y'all keep up the good work.

You're welcome!
True that, I think it's more convenient to add a "last updated" date in the Edge about page to help situations like this.

Ok, we have just updated Dev today and I can find no change to this issue (yet). I find it has been the same ever since it 'broke' recently & started no longer behaving properly, in this context.  Certainly, I fully agree it ought be fixed before the next Beta.  I will, tell you the developers ARE aware & say they are working on fixing it.  Fingers crossed it's done by then.

As for what you have Start vs Taskbar, sounds strangely different than what I have or I'm misunderstanding what you have described.  Below for your viewing & comments is from mine... 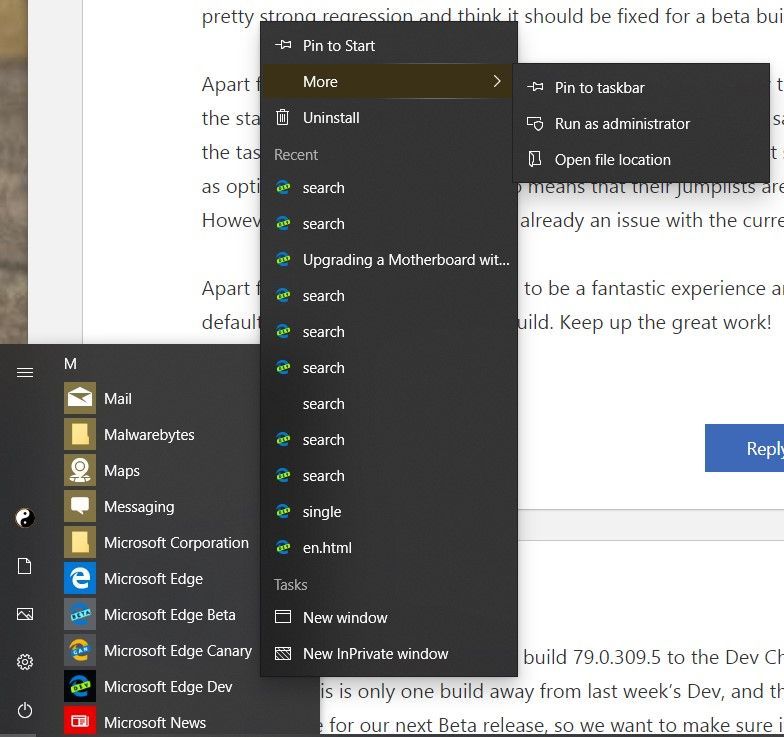 @Drew1903 Actually, your screenshots show part of what I mean. Observe how the jumplists are different on the start menu and on the taskbar. This is because they are not the same shortcut. Only the one in the taskbar shows the "right" jumplist. You can't get the same shortcut to behave correctly on both start menu and taskbar. If you pin the one from the taskbar to start, it shows a blank tile titled "W~MSEdgeDev.UserData.Default". If you pin the one from the start menu to the taskbar, then any windows you launch from it will spawn a new icon on the taskbar instead of being assigned to the icon you just launched from.

@josh_bodner After the update I'm not getting any search suggestions in the address bar, not from Google nor Bing.

talking about jump lists, I just went over mine on Canary and saw this problem first hand, the one on taskbar is ok but start menu looks weird. 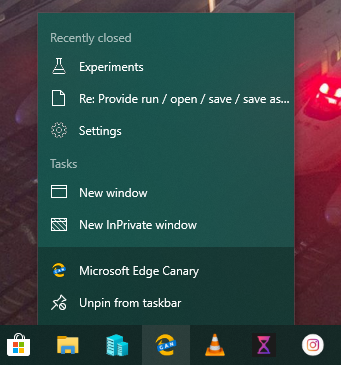 @josh_bodner It's been a few releases, I hope this is a known bug. If I actually open Microsoft AutoUpdate and check for updates from there, it is able to find the newest update and download it.

Am I mistaken or is the overlay scrollbar the default now and its flag gone?
0 Likes
Reply

Just as a note for the next Edge Dev, Edge Canary has been seriously messed up and unusable for me since the first one after last weeks Edge Dev release. In Canary, every version since last Tuesday: (1) right clicking on a page - anywhere on a page - does not produce a context menu; (2) it causes lsass.exe to start running taking 11% cpu continuously; (3) closing it leaves two msedge.exe's still running in Task Manager and lsass.exe STILL taking 11% cpu, and Canary can't be restarted; (4) if I kill the leftover msedge.exes, then lsass.exe goes to normal 0% cpu and I can restart Canary, but with all the same problems every time. No Canary update since this started  a week ago has changed anything. This latest Edge Dev does not show these problems, just Canary.

I reported it with Send Feedback, but just thought I'd mention it here.

Fair enough, Adrian.  I believe, by design & intent, they are not the same.  This you, eve, note & say yourself.  But, each doing & offering what they do seems ok to me or IMHO.  I don't see or find much different than the familiar or to what would be expected, traditionally. Admittedly, I may be the wrong person as I hardly ever turn to Start for anything... I'm more concerned with having everything copacetic at the taskbar  & or elsewhere.  I have preferred using the Applications window since sometime back in the early days of Win7.

@Drew1903 I disagree, I can't imagine this being intended and this behavior is inconsistent with every other program or app out there (Chrome Beta/Dev/Canary builds may have these problems as well, I don't know). Not to mention they used to be the same until about a month ago when this broke (just in time for the last beta release).