Hello insiders, today we’re releasing build 79.0.294.1 to the Dev Channel!  It’s a pretty normal week this week, so you can see the most noteworthy changes below:

As always, we thank you for using Edge, and for sending us all your great feedback and suggestions!

@Dennis5mile @HotCakeX, we had a pretty good wind storm last night and some of us lost power, which threw a bit of a monkey wrench in our plans.  We just pushed the button to publish the build.  It should be live now.  Thanks - Elliot

Canary for me is still on the same build as it was from yesterday and says it's up to date "Version 79.0.297.0 (Official build) canary (64-bit)" and when will you be releasing the top feedback summary for the week of october 8th? Is canary getting an update today?
0 Likes
Reply

Ah, bummer about the lost power... Pray all is well now!

I hope they release a new Canary build soon, cause right now Dev channel is only 1 update behind the Canary channel..
3 Likes
Reply

Cool. Just now need the weekly top feedback summary to be done and that'll be all that needs to be done for october 8th.
1 Like
Reply

@dustytravel I think you found it from the link I posted in last week's top feedback summary, but this week's is here:  https://techcommunity.microsoft.com/t5/Articles/Top-Feedback-Summary-for-October-8/m-p/900617.

thanks so much!
0 Likes
Reply 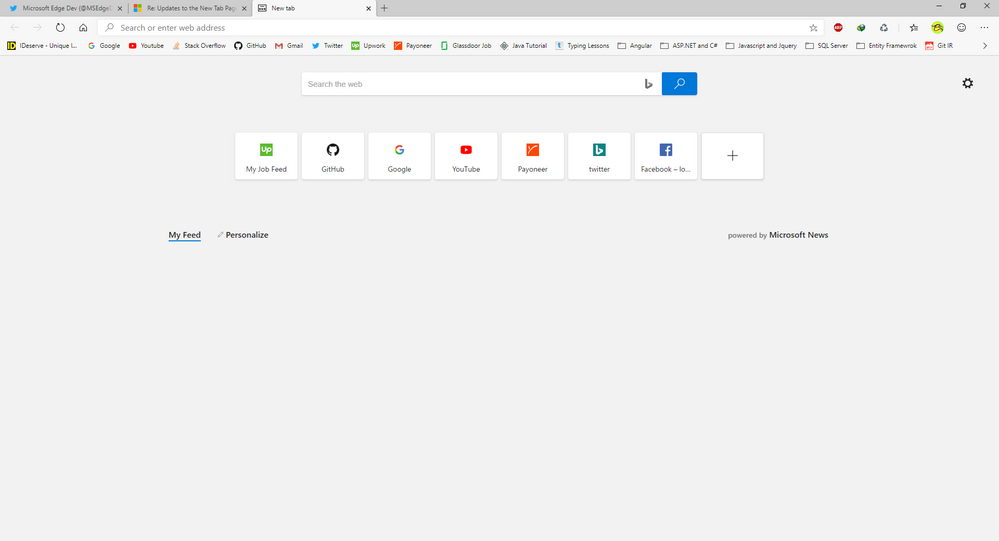 News feed is still completely broken in Dev Version 79.0.294.1. Is it still a bug or am I the individual facing the problem?

I am having excessive cpu usage at startup. Besides edge becomes laggy while watching 1080p+ youtube video. Also it has the full screen open/close bug from chrome.

All other MS browsers support this feature.

In the Sync settings I see all the grayed-out options (like syncing tabs and history) are gone.  I hope this doesn't mean you're dropping the future rollout of those features.  I'm counting on syncing history, tabs, settings, etc. at some future point, please tell me you're doing this.

In the Sync settings I see all the grayed-out options (like syncing tabs and history) are gone.  I hope this doesn't mean you're dropping the future rollout of those features.  I'm counting on syncing history, tabs, settings, etc. at some future point, please tell me you're doing this.

this is the developer's response to this:

"this is not a mistake. It is also not a change of plans.  We are still working on bringing History sync, Extension sync, and Open Tab sync to our next version of Edge.  We are cleaning up the UX in the meantime, as we have heard feedback that it is confusing to some people why the setting was greyed out."