Dark mode has been enabled. However, the top bar with the tabs doesn't go dark except for the active tab, and that looks weird. It happens because it doesn't override the taskbar setting like the old Edge did. Thanks for bringing it in so early.

@NicolSD   I assume that this is in the current Canary build?

How to enable this Dark mode?
0 Likes
Reply
Highlighted

@NicolSD  Thanks.  Other than the method in set the browser in Dark Mode, does it look like Dark Mode as enabled through edge://flags (see below)? 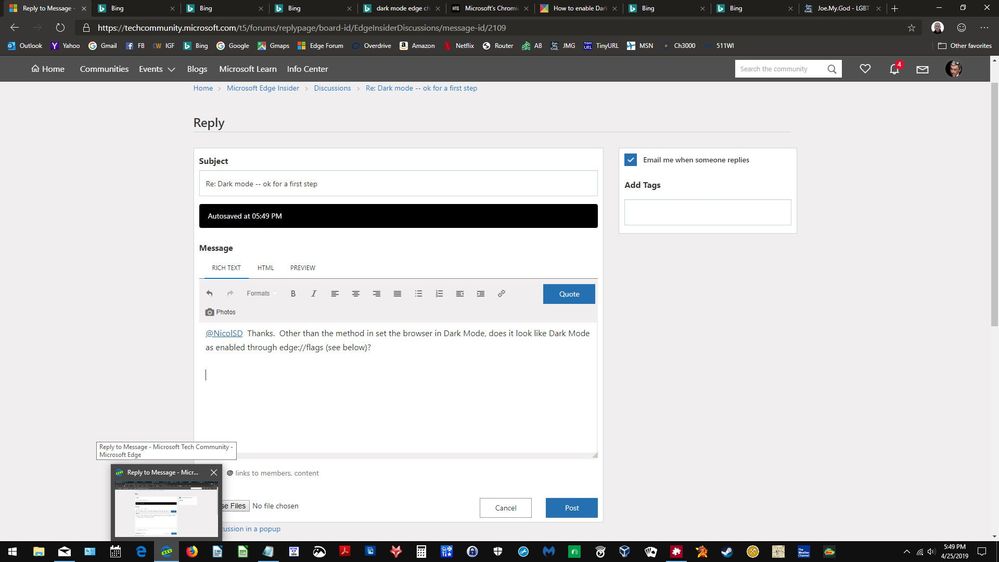 @tomscharbach -- Sorry, I should have mentioned it right at the start. It is indeed in edge://flags. Enable the one called Microsoft Edge theme.

@NicolSD   "Sorry, I should have mentioned it right at the start. It is indeed in edge://flags. Enable the one called Microsoft Edge theme."

Thank you.  I did that as soon as I installed Edge Chromium and have been running that theme "enabled" since the first day, as you can see from the screenshot in the comment above.

We will see what comes of it.

"Beauty is in the eye of the beholder"   "Everything is subjective"

I use Dark everywhere I can, all the time.  The Snip below is full Dark, (OS, browser) & ONE (OS) Accent colour... that shows in Edge C.  Also, if one hovers a tab, they 'shadow' well in Edge C, helping to making it obvious & easy to see, to tell, which tab one is pointing at, at that moment.

Tom, personally, I beg to differ.  One thing which caught my eye at the onset with Edge C was the top bar.  It seemed to take the (chosen) Accent colour better & do more with it, the tab design looked more realistic, more like an actual tangible folder tab AND the Active tab, easy to see, nicely noticable, stood out well.  Anyway, here are 2 'idendical' top bars; Edge C on top. For me, I suggest the top one 'pops' more & better including the Active tab immediately & blatantly discernable.

So, just my particular view on the matter.  Different eyes, different perception, is all.

NB: Myself, I don't show the Favs Bar except, while opening something from it; then, it's rehidden. 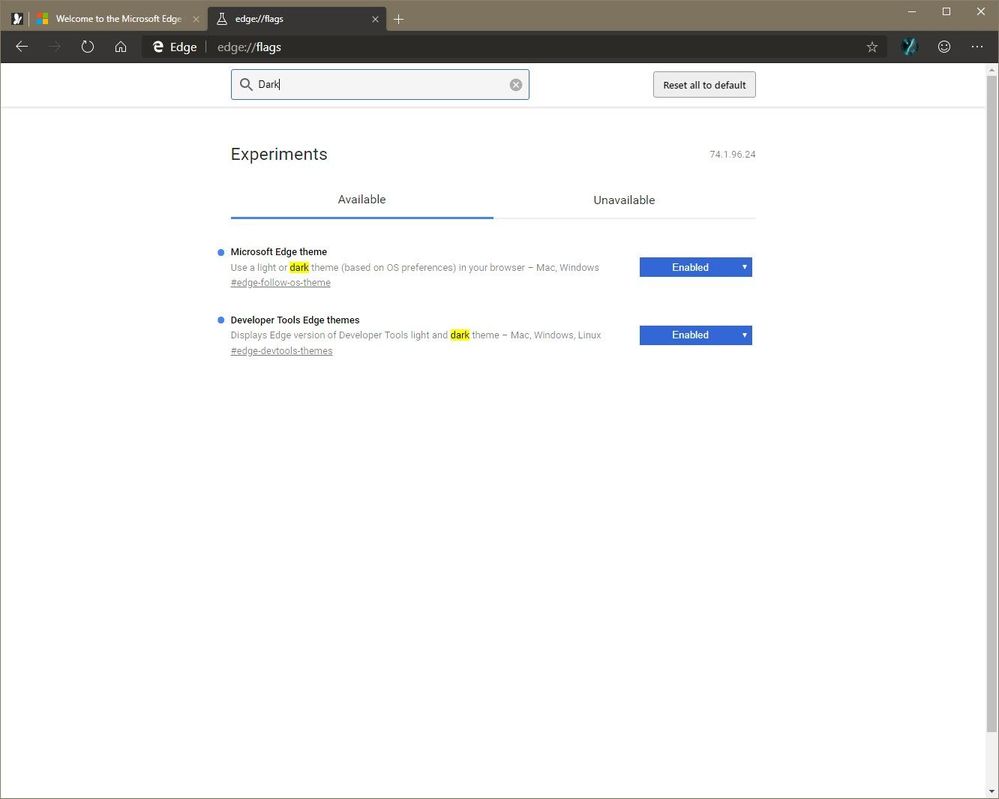 The Canary 75.0.140.0 design is not consistent with Microsoft's implementation of dark mode in other areas of the OS (e.g. Windows Explorer).   I understand what Microsoft is trying to do (better differentiate active tabs from non-active) but it seems to me a regression to go back to Windows XP color values to do so.   One of the things I've appreciated about Windows over the years is internal design consistency, and the Canary 75.0.140.0 design is departure from that practice.

But, bah.  It isn't my circus and they aren't my monkeys.

@tomscharbach Actually, the new Edge gets the top bar's colour instructions from Windows' Colour settings, unlike the old Edge which used its own. If you enable Transparency effects and Automatically pick an accent colour from my background, it looks quite garish. That was my original complaint though I used the word WEIRD instead of GARISH. That is why I titled the thread "Dark mode -- ok for a first step." I thought this was a first step.

So far, I have worked under the understanding that MS is trying to bring back Edge inside of a different container minus the stuff that can be accomplished with existing extensions. I may very well be wrong since MS's doesn't seem to want to be too clear about its intentions.

@tomscharbach -- Right now, there is no consistency in the windows' dark mode. The attached pictures show the different ways Dark Mode is implemented in Edge Chromium, Edge Classic and File Explorer. They are layered in the following order:

Look at what happened to the second line of the second File Explorer image I snapped. Notice the word FILE is in green? That was the accent colour of my desktop image. Meanwhile, the first image shows two different tones of brown in the selected File Explorer window while different something totally different in Edge Chromium.

Right now, the entire Dark Mode scheme is a mess. As I said earlier, there is no consistency. That is one more reason I called this thread "a first step."

@NicolSD   "[T]he new Edge gets the top bar's colour instructions from Windows' Colour settings, unlike the old Edge which used its own."

Indeed it does. Thanks for letting me know. The Color setting that toggles tab color in Edge Chromium is "Show accent color on the following surfaces, Title bars and window borders".

I had no idea because I don't enable the "Show accent color ..." settings. But once you do that, it takes about two seconds to make Windows remarkably garish, even without transparency. It is actually kind of fun, trying different setting and backgrounds to see if you can come up with the worst looking UI ever.

@NicolSD   "Right now, the entire Dark Mode scheme is a mess. As I said earlier, there is no consistency. That is one more reason I called this thread "a first step."

I've been following your footsteps on this, changing settings and so on, and you are dead right. What a mess!

I missed most of the issues with dark mode (I've been using it since W10 introduced the option) because of the way I set up W10 -- disable transparency, disable "Show accent colors ...", disable all visual effects except "smooth edges of screen fonts" and "smooth-scroll" in order to get the flat unadorned UI I like. But having turned most of it back on temporarily to follow your footsteps, I see what you are talking about.

@NicolSD  "So far, I have worked under the understanding that MS is trying to bring back Edge inside of a different container minus the stuff that can be accomplished with existing extensions."

I assumed that Microsoft was going to put Edge Chromium in a separate container, too, but I am starting to wonder after reports in other threads that Edge Chromium is inheriting administrative rights from e-mail programs that open the browser, as Chrome does. That behavior is downright dangerous and one reason I refuse to use Chrome.

If Microsoft doesn't put Edge Chromium in a separate container or otherwise sandbox the browser, it is opening users to a lot of unnecessary security risk.

@NicolSD  "I may very well be wrong since MS's doesn't seem to want to be too clear about its intentions."

Yup. We've been asking the Edge Team for a high-level list of features/functions that Microsoft intends to include in the release version (a "roadmap" as it has been called in several threads) so that we can spend our time testing instead of nagging Microsoft about including features/functions already planned) and the silence has been deafening.

@NicolSD   By the way, Nichol, I meant to include this in my previous reply, but forgot.  So let me say it now:  I appreciate the effort you put into this forum.  Whenever I see that you've posted something, I can count on it being something worth reading, something that is technical and something from which I can learn.  Thanks for being an active participant.

@tomscharbach  Thank you for the kind comments. I am not a programmer but a techy user from the first days of personal computers who eventually made his way to becoming a computer tech (and a journalist) until he was forced to retire because of a totally different kind of MS, the disease kind. Back in the early 90s, I used to refer to Microsoft as Microsloth because Windows was so slow in those days.

I am both a Windows Insider and an Edge Insider because I want to see the changes in Windows development and contribute in my own small way. I spend long days in front of the computer and sometimes figure out how bugs can be reproduced.

I may not be a programmer but I still would find it useful to know where Microsoft when features are implemented and/or fixed. It would save me time spent on trying to reproduce bugs day after day.

@NicolSD  "I may not be a programmer but I still would find it useful to know where Microsoft when features are implemented and/or fixed. It would save me time spent on trying to reproduce bugs day after day."

Wouldn't we all ...   The Edge team has made a small but useful advance in that regard -- see Dev channel update to 75.0.139.1 is live posted today.  Progress not perfection, as it is said.

@tomscharbach Posting about build 139.1 when 141.0 is in the wild? Yep, that's a good first step but the belated information is quite typical of MS. Have you ever checked Win10's Feedback Hub? Build information is always late in coming?

Tom & Nicol, I run both Dev & Canary.  But, I'm quite sure I did those Snips from Dev 131.  Might look a wee be different from yours because of the Accent colour being used on the (my) OS.

@Drew1903 -- Yes, it does. But it handles those settings from File Explorer. Check the two linked files in my previous posts. What's more, Edge Classic doesn't even respect Accent colour settings.