First of all I'd like a true Dark Mode in the Immersive Reader Mode, actually we only have Black and some fancy colors background. I'd like a dark grey background similar to the Edge UI or the OneNote Dark Mode on Windows.

Is there a way to eliminate some choices in the right-click menu? There are too many of them created by extensions and I don`t need them to be displayed there.

MS Edge Dev has much bigger extension icons and there is a lot more space between them when compared to Chrome.

Chrome with many more extensions

As you can see there is a really big difference. I know that I can hide them inside the menu, indeed I already have 15 there but there are a lot of them which I want to be shown.

Is there a way to have tab preview similar to the old Edge when hovering over a tab?

And some bug report:

1) Move tab to new window UI is broken when I right-click on a tab. Also, that menu is ridiculously big, I'd like a smaller one in width and height.

When I hover the mouse over a text box like the subject of this thread, this box with some info appears 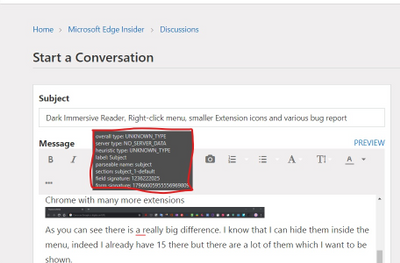 The Italian translation of Picture in picture mode is "Immagine In Immagine" which is completely wrong. Leave it in English or use "Modalità fluttuante". Speaking about PiP I'd like a better one similar to the Opera Video Pop Out which has lots more control over the video than just pause it like in Edge.

"True dark mode" is this

and those "fancy" colors are actually very good for the eyes and create a pleasant view.

That bug in the UI right-clicking on the tab is fixed in upper channel, Canary, Dev should wait to receive the fixes as well in the next update.

Tab previews or Tab thumbnails are not currently available, it's on the Top feedbacks list received from the users.

Thank you very much for your reply. I think that the dark mode available is more like a Black mode. It is completely different from the Dark mode of other MS product like OneNote or the Outlook website, indeed they use a dark grey background which IMO looks better and is much easier on eyes. I'd appreciate something like a second type dark mode that uses dark grey since Edge already has lots of light colors and just one dark color (black). I called them fancy because I don't think lots of people will use such a variety of colors and cold colors actually can hurt eyes and cause sleep disorder at nighttime.

I should have checked about the other bugs and features before posting, but I thought that the tab preview would be already available since in the flags section there are three types of "Tab Hover Cards".

@HotCakeX  Thanks for passing that info along! :)

@Francesco27 If you haven't already, can you please submit feedback through the browser for that second bug? It will, with your permission, give our devs a more detailed log report. I'd be happy to pass that third bug on to our Localization Team; can you please include a screenshot of where you're seeing the PiP Italian translation?

I've sent the feedback for that second bug, thank you. However it didn't let me add a screenshot of it, I could just send the automatic screenshot made by Edge when clicking on Feedback.

The wrong translation "Immagine nell'immagine" is inside the right-click menu when you right click on a video. Here is a screenshot: 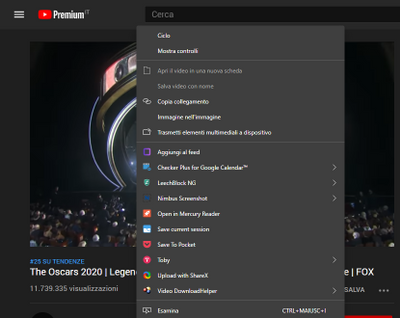