I was looking into Firefox to experiment with its usability, and came across a fantastic feature called Firefox color that lets us create custom themes for Firefox. This is a pretty great feature and I was wondering if this could be added to Edge. I am currently able to customize Edge's top bar as per Windows system-wide Color Customization, but nothing else. Curiously, it does not even follow this color on accents (like toggles and certain buttons, etc) like other Windows 10 apps (like Mail, Calendar, People, Certain Third Party UWP apps, etc). Just the top bar. But that's beside the point. System wide customization is probably a Windows level feature that appears to be on the way out given its lack of adoption in Skype, Sticky Notes, etc.  Anyway, Firefox Color is something I would like to see in some form on Microsoft Edge. 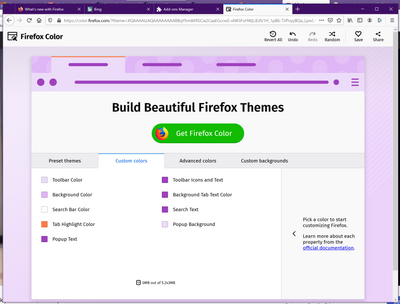