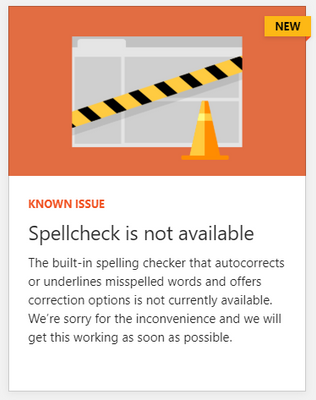 A long time ago, I made a copy of this entry on a What's new? page. We eventually got spell-check, and then quite recently the ability (by virtue of

edge://flags/#win-use-native-spellchecker) to use the Windows spelling dictionaries. Very satisfactory.

However, I still haven't seen the autocorrect function that the team was going to 'get working as soon as possible.' There are signs of it, though: if a 'wrong' word that has been added to the Windows 10 autocorrect list is entered, it will be underlined and the 'right' word will be available on the context menu: 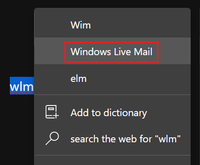 This is a great start; can we expect the feature to be completed soon?

Hi,
I don't remember Edge ever promising to bring auto-correct feature to Edge.
auto-correct is something that is usually implemented in OS level, not application level.

Windows 10 has auto-correct feature And words suggestion which I am using right now that I'm writing this comment. it has it for physical keyboards as well as touch screens.

Android also has it on OS level in the OS keyboard settings.
0 Likes
Reply

I don't remember Edge ever promising to bring auto-correct feature to Edge.

I took the text of the Known issue reproduced above to indicate that autocorrect would be implemented sooner or later.

Let's try teh autocorrect in tihs reply, using chicago and london as test words, including some of the obvious ones like abbout and acommodate.

There we have common typos and misspellings as well as capitalization errors which aren't autocorrected, even though the 'right' ones are available on right-clcick and as suggestions.

I'm really most interested in using autocorrect to expand abbreviations for commonly-used terms, like sgcc, which I have entered into the Windows ACL as South Gloucestershire County Council. It takes me ages to type that correctly.

This works everywhere else I've tried, including Legacy Edge.

Some suggest/suspect Grammerly to be a security risk. Windows autocorrect implementation is better value prop for enterprise/business.

You expect Edge to auto correct them or Windows? because Edge isn't supposed to have an auto correct on its own.
0 Likes
Reply