This article describes the index rebuild process as well as index maintenance for clustered Columnstore indexes and is directed towards SQL 2014. In SQL 2016, there have been several index maintenance enhancements that will be covered in a separate post.

Building (or rebuilding) a Columnstore index can be a resource intensive operation. Index creation time can be 1.5 times longer than a regular b-tree and resource consumption as well as duration depends on a few factors other than physical resources that include

Plan for Index Rebuild of a Non-Partitioned Table with 6 billion rows:

The Columnstore index is built in 2 phases indicated by the plans above:

From the first segment build, we know how much memory was needed. Based on this knowledge we activate only N number of threads whose total memory grant will fit into the memory that was granted earlier. This number of threads activated is represented in the plan as “Effective Degree of Parallelism” and can be checked against the actual degree of parallelism as seen in the diagram.

The Memory Grant information is also available from the Query Plan.

During the life of the index build, additional memory can be granted within resource governor limits and low memory conditions are checked as well. If a Low memory condition is detected, the segment will be trimmed before it reaches the 1 million row mark.

There are a couple Extended Events that can help in diagnosing index build and segment quality related issues.

a. Column_store_index_build_throttle - indicates if the DOP has been throttled. 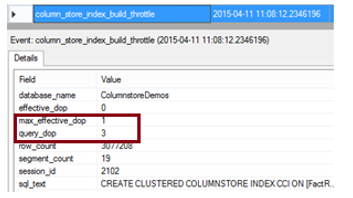 b. Column_store_index_build_low_memory – tells us if a segment is trimmed due to low memory condition

c. Column_store_index_build_process_segment – gives us the segment that was trimmed and the trim_reason. This list isn’t exhaustive, 1 = Low Memory, 2 = Dictionary full

This is a 6 billion row table that was tested, SQL Server has 60 cores. 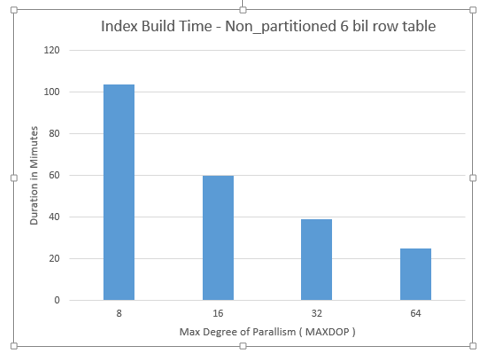 If you look at the perfmon charts below and the timings, Rebuild index for a Columnstore index does not scale linearly. This is because the Global dictionary is built in serial as discussed, and is a constant irrespective of MAXDOP for the index build. As you see in the perfmon images below, the dictionary build time takes a larger percentage of the overall time the higher the degree of parallelism.

MAXDOP 32: Building the Global dictionary takes around 20% of the total index build time with MAXDOP 32. 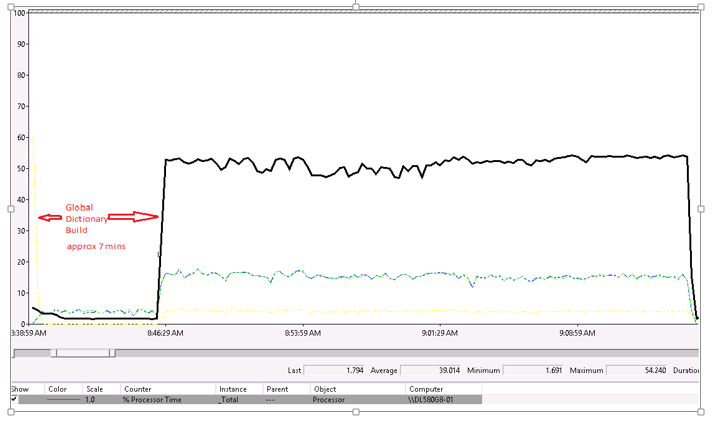 MAXDOP 64: Building the Global dictionary takes around 29% of the total index build time when maxdop is 64. 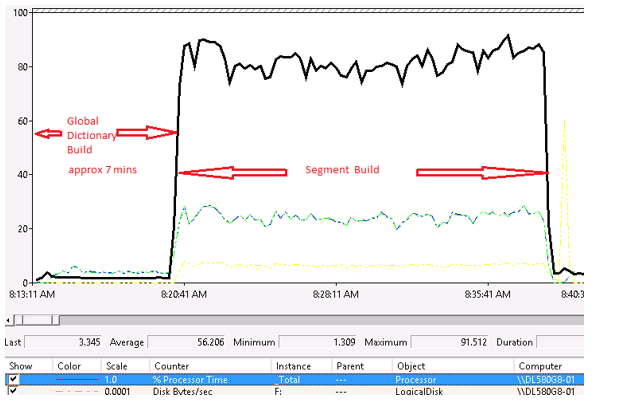 There are 2 operations from a Columnstore Index maintenance perspective

INDEX REORGANIZE : This manually moves closed ROWGROUPS into compressed columnar storage and this is done online. You do not have to do this, the tuple mover will ultimately move a closed rowgroup into columnar storage but the tuple mover is single threaded so issuing an index reorganize is a way to manually invoke compression on a closed row group.

INDEX REBUILD: This can be done at a partition Level for a partitioned table, and is an offline index build and at this point there isn’t an ONLINE equivalent. The Rebuild reads and recompresses all the data in the specified partition or the entire index. In an updatable Columnstore, deletes of data that reside in a compressed rowgroup are logical deletes. You can encounter situations where majority of the data in a rowgroup could be deleted. In such cases in order to reclaim that space, you have to REBUILD the index for the partition in question. Another reason one would want to rebuild an index on the partition is to improve rowgroup quality if you have a large number of rowgroups each having a small number of rows. In this case rebuilding an index can consolidate smaller row groups into larger ones which could help both from the compression perspective as well as from the query performance perspective.

Here is a sample script which can help identify partitions that are good candidates to be rebuilt based on some thresholds defined in the script.

/*
Rebuild index statement is printed at partition level if
a. RGQualityMeasure is not met for @PercentageRGQualityPassed Rowgroups
-- this is an arbitrary number, what we are saying is that if the average is above this number, don't bother rebuilding as we consider this number to be good quality rowgroups
b. Second constraint is the Deleted rows, currently the default that is set am setting is 10% of the partition itself. If the partition is very large or small consider adjusting this
c. In SQL 2014, post index rebuild,the dmv doesn't show why the RG is trimmed to < 1 million in this case in SQL 2014.
- If the Dictionary is full ( 16MB) then no use in rebuilding this rowgroup as even after rebuild it may get trimmed
- If dictionary is full only rebuild if deleted rows falls above the threshold
*/

if object_id('tempdb..#temp') IS NOT NULL
drop table #temp
go


-- Maxdop Hint optionally added to ensure we don't spread small amount of rows accross many threads
-- IF we do that, we may end up with smaller rowgroups anyways.
declare @maxdophint smallint, @effectivedop smallint
-- True if running from the same context that will run the rebuild index.
select @effectivedop=effective_max_dop from sys.dm_resource_governor_workload_groups
where group_id in (select group_id from sys.dm_exec_requests where session_id = @@spid)

Summarizing some of the best practices: