Collecting performance data with PSSDIAG for SQL Server on Linux

PSSDIAG is a popular tool used by Microsoft SQL Server support engineers to collect system data and troubleshoot performance issues. This is a well-known tool for SQL Server on Windows, and we needed equivalent functionality on Linux. PSSDIAG data collection for Linux is now available here . It is a set of bash scripts that collect all the necessary data for troubleshooting performance problems, similar to PSSDiag on Windows.

As part of the default data collection, these scripts:

Steps to collect data through PSSDiag on Linux

To collect data and analyze performance issue(s), follow the steps below:

1. Create a folder and download/unzip the pssdiag release version.


Note: The pssdiag folder and its parents must have r+x (Read and Execute) permissions for the mssql account if collecting extended events. By default, on RHEL, the /home/user directory does not have those permission. Either grant permissions or create the folder elsewhere. See the Readme for additional details.

4. This will create an output folder under the current folder to store all the data collected. 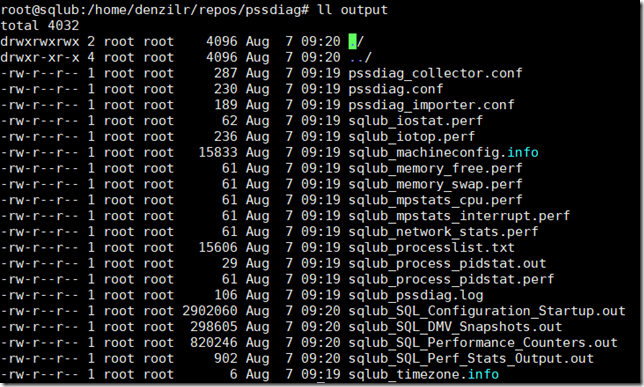 5. After you have reproduced your problem or captured data for the timeframe encompassing the problem, stop the collector. Invoke the script below which stops the collection and zips up all the files


You should get the confirmation message such as the one below, pointing to the location of the zipped output file.

In order to collect an additional TSQL script, name the script SQL_Custom_Script.sql and in the pssdiag_collector.conf set the option CUSTOM_COLLECTOR=YES.

This collected data can be analyzed by using a tool called SQLNexus in the same way as with PSSDiag for Windows: https://github.com/Microsoft/SqlNexus/releases . In the near future, we will be adding a tool that converts the OS metrics (mpstat, iostat, pidstat, and network stats) into a perfmon BLG file, to visualize it in PerfMon for Windows folks who use/prefer PerfMon. As an alternative, you can use any of your favorite shell scripts to analyze the collected data.

Known Issue: When analyzing data collected on a Linux machine with SQLNexus, one of the first things you may notice is the CPU in one of the charts obtained from sys.dm_os_ring_buffers shows CPU consistently at 100%. This is because the sys.dm_os_ring_buffers CPU numbers are not yet integrated into SQL Server on Linux. Other than that, all the other DMV data collected can be visualized.

As you use this to collect performance data, let us know how we can improve it.