The checkpoint process is a background process used by SQL Server to ensure that in the event of a crash, the time it takes to recover isn’t very long.


For memory-optimized tables, the checkpoint process flushes both the data streams that contain all new versions of records and the delta stream that contains deleted versions of records to data and delta files . Each pair of data/delta files constitutes a checkpoint file pair or CFP and these files have the extensions .hkckp. All the data/delta files are written to sequentially or as streaming IO rather than random IO. To prevent the files from growing indefinitely , the checkpoint process will also do a “ merge ” if it is possible to merge subsequent checkpoint file pairs that have been closed.

This difference in behavior in checkpoint can cause confusion with regards when the log is purged when you have memory optimized tables. For disk based tables, the log is truncated on a log backup for full recovery model or an automatic checkpoint for a database in simple recovery mode. This changes when we have a memory optimized table, a transaction log backup doesn’t necessarily truncate the log until the thresholds specified above are met.

Of course, at any time though, a manual checkpoint command can be issued.

Also, with SQL Server 2016 there is a special case, based on the conditions below, which will vary the checkpoint characteristics for memory-optimized tables. This is referred to as the “Large checkpoint” process, which is enabled on larger machines if all of the following conditions are true


Here is an example that shows what happens with checkpoints on memory-optimized tables. In summary we will:


The expectation is that after the log backup, the log space used will be minimal unless there is some open transaction/ un-replicated transaction, or some other factors that prevents the log from being purged. 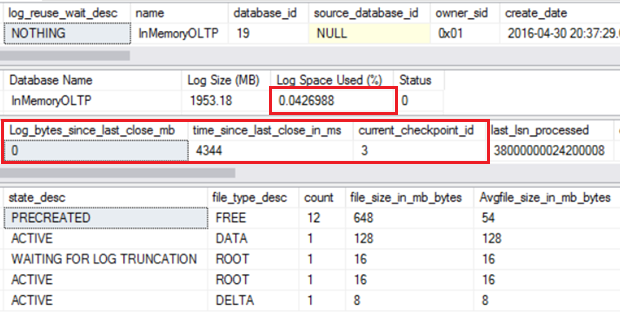 -- This proc inserts 900K rows 20 times
-- Attempt to grow the log to ~ 1GB
BEGIN TRAN
EXEC dbo.[InsertSalesOrder_Native_Batch] 1,100,900000
DELETE FROM dbo.SalesOrder_MemOpt WITH(SNAPSHOT)
COMMIT
GO 20
-- Backup the log
-- Do you expect the log to be purged?
BACKUP LOG InMemoryOLTP TO DISK = 'c:\temp\test.bak' WITH INIT,COMPRESSION
GO

As shown below, we have ~ 1GB of Log generated since last checkpoint, and after the backup log, the log spaced used % is still at 51%, and there is 1 active data file only which indicates the data/delta file stream has not been flushed to disk given this was a new database. 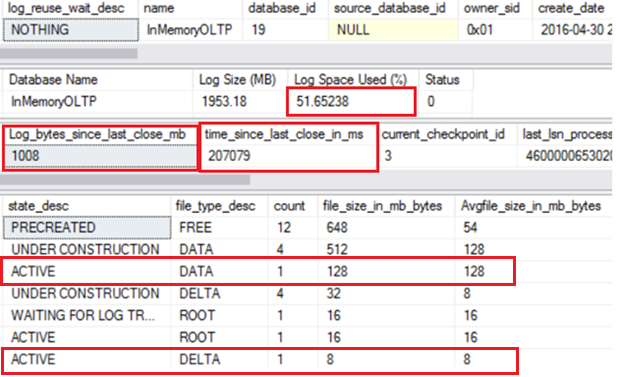 Now when we issue a manual checkpoint, the active files go up to 5 as data/delta files are flushed, and log bytes since last checkpoint go to 0. However, the log spaced used is still at 51% as we are in full recovery model and a backup log will free that up.
-- Manual checkpoint
CHECKPOINT
GO 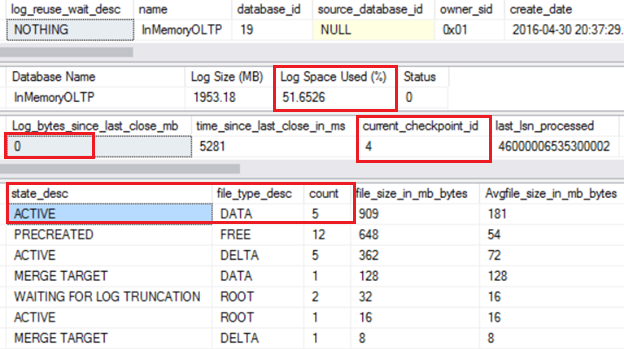 After the backup the Log space used drops to minimal amount as expected.
-- Backup to Free up the log
BACKUP LOG InMemoryOLTP to DISK = 'c:\temp\test.bak' WITH INIT, COMPRESSION
GO 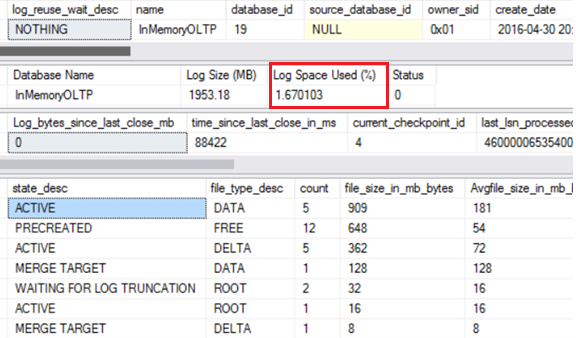 Had we waited until 1.5 GB of Log was filled up, no manual checkpoint would have to be issued and the log would be purged based on the size based threshold.


Large checkpoints were designed for high throughput systems with very high log generation rates of up-to 1GB/sec. The purpose is to ensure that the checkpoint process would not be continually executing and would scale efficiently.

With Large checkpoints enabled, there are the following behavior changes:


Given this new behavior with SQL Server 2016, there are a few scenarios to consider where large checkpoints do have ramifications:

FIX: Slow database recovery in SQL Server 2016 due to large log when you use In-Memory OLTP on a...