Turn on suggestions
Auto-suggest helps you quickly narrow down your search results by suggesting possible matches as you type.
Showing results for
Show  only  | Search instead for
Did you mean:
MSDTC Supported Configurations
By 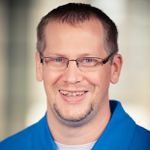 MSDTC configuration is not as straight forward as you might think. It's a different choice if you are using a local MSDTC, clustered MSDTC, on-premises, Azure, Failover Cluster, or Availability Group. Every one of those variables leads you down a different path with different choices. The goal of this article is to clarify those choices.

If you think you do not use the MSDTC, you better check again. I frequently see folks using it that do not realize it. The most common is Linked Servers. You got it. If you are using Linked Servers, you're using the MSDTC.

You are no longer required to install an MSDTC with a SQL Failover Cluster starting in SQL Server 2008. That does not mean you do not need an MSDTC configuration. If you wanted to make your application database highly available, but your application did not use the MSDTC you were being required to install one anyway. That limitation is what was removed, not that you simply didn't need a clustered MSDTC.

Let's start with a simple description of the purpose of the MSDTC. First the application starts a transaction that queries two different servers. That's a distributed transaction. Since parts of the query are going to two different locations, something has to monitor it to ensure transaction consistency. That's the job of the MSDTC. What we do not want is for the transaction to go make updates to the first destination and commit that without making sure the updates to the second destination also commit. If either one of them fails we want to roll it back and if they succeed we want to commit them.

The MSDTC logs the transactions in its own log so it can track them. This is key to remember. It's the availability of this log that we care about.

We will continue with a stand-alone server to see how this works and then we'll work through Failover Cluster Instances and Availability Groups. On a stand-alone all we have is the local MSDTC. When our application runs a transaction that inserts rows in a database on this server and also on another server, the local MSDTC enlists in the transaction. Its job is to log the transactions and ensure any in-doubt transactions are either aborted (rolled back) or committed (rolled forward). There is not much ambiguity in this scenario since it is not designed to be highly available, but it gives us a basis on which to build. 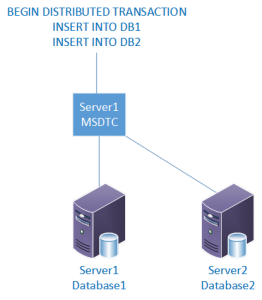 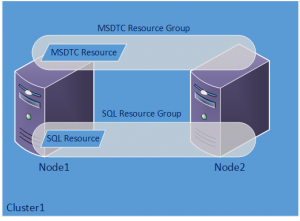 FCI with a Clustered MSDTC Configuration 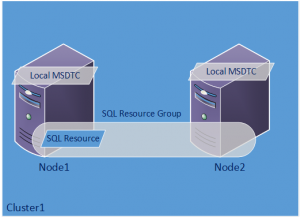 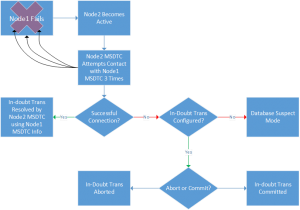 The MSDTC works exactly the same in an Availability Group as it does in a Failover Cluster Instance, with a couple of distinctions. The first is on what versions it is supported. The versions also differ in the features they support. Here is what that looks like.

The second distinction is that you need to create the availability group using the WITH clause of DTC_SUPPORT = PER_DB. In SQL Server 2017 and SQL Server 2016 SP2 you can now use the ALTER statement to change this after AG creation. Read here for details on its usage. What's important about this distinction is what it means under the hood. In a Failover Cluster Instance, the instance itself becomes the Resource Manager, but in an Availability Group each database becomes its own Resource Manager. Remember that in an AG we have completely different instances of SQL running on each replica so we cannot use an instance level Resource Manager as the ID would be different. The RMID comes over with the database when it fails over allowing it to resolve in-doubt transactions. An FCI is a single instance so we don't have this problem as the RMID is consistent across failovers. Read this to get a better understanding of the role of the Resource Manager.

In Azure IaaS, the functionality described above does not change. What gets more complicated is the storage for a clustered MSDTC, as it requires the storage to be shared. Microsoft has partners that offer options for shared storage in Azure, which include solutions like iSCSI among others. We also have a native Microsoft solution when using Storage Spaces Direct (S2D) . Although you can use this for SQL Failover Cluster Instance Resources in Windows Server 2016, you cannot use it for the MSDTC Resource until Windows Server 2016 Build 1709.

Another difference in Azure is outside of the servers and MSDTC, but is required to make it work properly. A clustered MSDTC has a network name and in Azure we need an internal load balancer to direct that traffic. This is important because you need to use a standard load balancer (not basic) which in turn means you need to use standard IP addresses. You will need to keep that in mind when building your VMs. Make sure to check out the article in the above paragraph as it describes and demonstrates this configuration.

I do want to mention one other noteworthy thing to think about as you design your architecture. If you have multiple instances of SQL Server running and you create one clustered MSDTC in its own resource group, every instance uses that same MSDTC. If you have a lot of distributed transactions this can become a bottleneck. The other issue that can get introduced with a single clustered MSDTC in its own role, is that you cannot guarantee it will run on the same node as your SQL instance. You could easily have an instance running on Node2 and using an MSDTC running on Node1. This can introduce network latency. Refer back to the second diagram in this post titled, "FCI with a Clustered MSDTC Configuration" and imagine the SQL Resource is running on Node2 while the MSDTC Resource remains on Node1.

The best practice is to have 1 MSDTC per instance, put it in the same role as the instance, and manually map it to the instance. This makes sure the MSDTC for that instance is running on the same node and spreads the load out. Here is how that would look with two instances of SQL Server and each of them having their own MSDTC. 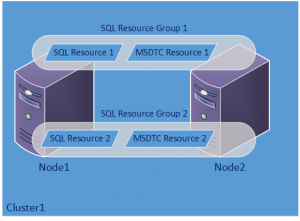 The order of precedence defines which MSDTC Coordinator SQL Server will enlist with at startup.  Although the precedence order has been discussed in the past, what we will see is that there really is no order.  Please refer to this article on MSDTC Best Practices with an Availability Group to get an understanding of how this mechanism really works.

This matrix should help guide you as you design your architecture and decide on versions and features.