Update 2101 for the Technical Preview Branch of Microsoft Endpoint Configuration Manager has been released. You can now download console extensions from the Community hub and have it applied to all consoles connected to a hierarchy. This improvement allows you to start managing the approval and installation of console extensions used in your environment.

A new node has been added to the Configuration Manager console. The Console Extensions node is located under Administration > Overview > Updates and Servicing. Console extensions downloaded from the community hub will be located here. Actions for console extensions are grouped in the ribbon and the right-click menu. 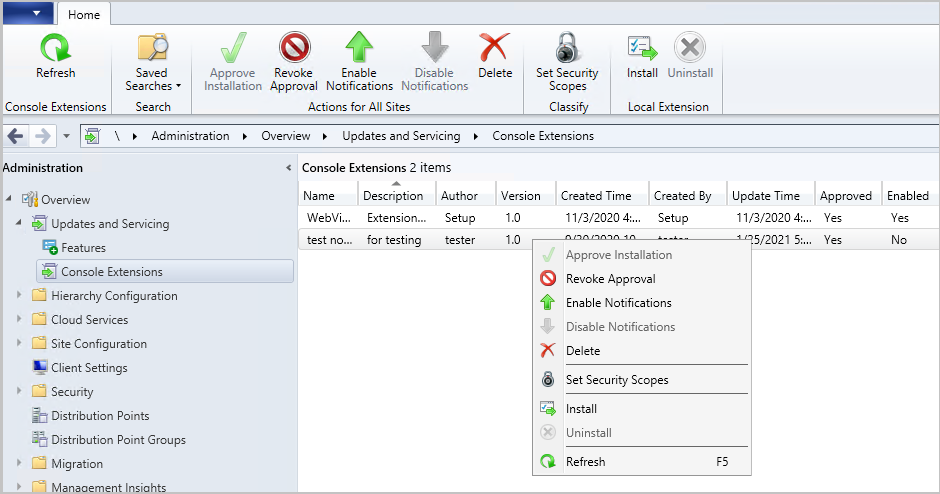 Deploy a feature update with a task sequence - Based on your UserVoice feedback, you can now upgrade a client's Windows OS by using a feature update deployed with a task sequence. This integration combines the simplicity of Windows servicing with the flexibility of task sequences. Servicing uses a single ESD file that you synchronize through the software update point. This process simplifies the need to manually get, import, and maintain the Windows image content used with a standard task sequence to upgrade Windows. The size of the ESD file is generally smaller than the WIM image file.

Client setting for displaying Software Center custom tabs - Technical preview version 2012 included an improved user experience and security with Software Center custom tabs. It required that you manually deploy the Microsoft Edge WebView2 browser control. Starting in this release, you can now configure a client setting to use the WebView2 control.

Prerequisite rule for deprecated Azure Monitor connector - We continue to see broad adoption of native Azure Monitor log query groups as customers shift more of their workloads to the cloud. Because of this reason, starting in November 2020, the Configuration Manager feature to synchronize collections to Azure Monitor is deprecated. When you update to this release, a new prerequisite check warns about the presence of the Log Analytics connector for Azure Monitor.  This connector is deprecated and will be removed from the product in a future release. At that time, this check will be an error that blocks upgrade.

We would love to hear your thoughts about the latest Technical Preview!  Send us Feedback about product issues directly from the console and use our UserVoice page for ideas about new features.