Turn on suggestions
Auto-suggest helps you quickly narrow down your search results by suggesting possible matches as you type.
Showing results for
Show  only  | Search instead for
Did you mean:
Automating HPC Images customization with Azure Image Builder
By 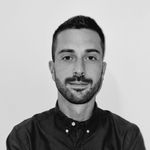 Azure HPC main orchestration solutions, Azure Batch and Azure CycleCloud, can be easily adapted to the needs of a specific workload scenario.

One of the features enabling this flexibility is the possibility for end users to create custom OS images for their clusters. These images can be configured to contain specific libraries, applications, drivers or other dependencies required for the workload.

However, managing these customizations can quickly become time consuming and error prone without the implementation of appropriate automation strategies.

This article defines an automated methodology to create custom HPC images through Azure Image Builder and Azure Compute Gallery. It will present also a recipe to deploy the required Azure resources through an Infrastructre as Code (IaC) approach using Bicep templates.

The official scripts for Azure HPC images preparations contained in Azure/azhpc-images repository are leveraged in the procedure described in this article.

Azure/azhpc-images repository contains the recipes for the preparation of CentOS-HPC / Ubuntu-HPC / Alma-HPC for H-series and N-series machines, as described in the Azure HPC images documentation.

The scripts from this repository perform installation of relevant tools, libraries and drivers for the HPC world. For example, all the layers added in the process for a CentOS 7.9 image are reported inside a readme file of the official repository, where the list contains:

This repository is a valuable guide for customizing an HPC image starting from a standard Azure Marketplace image since it allows to install the standard packages for an HPC scenario and a specific OS.

In this article, it will be leveraged for the customization of an Ubuntu 20.04 LTS Azure Marketplace image 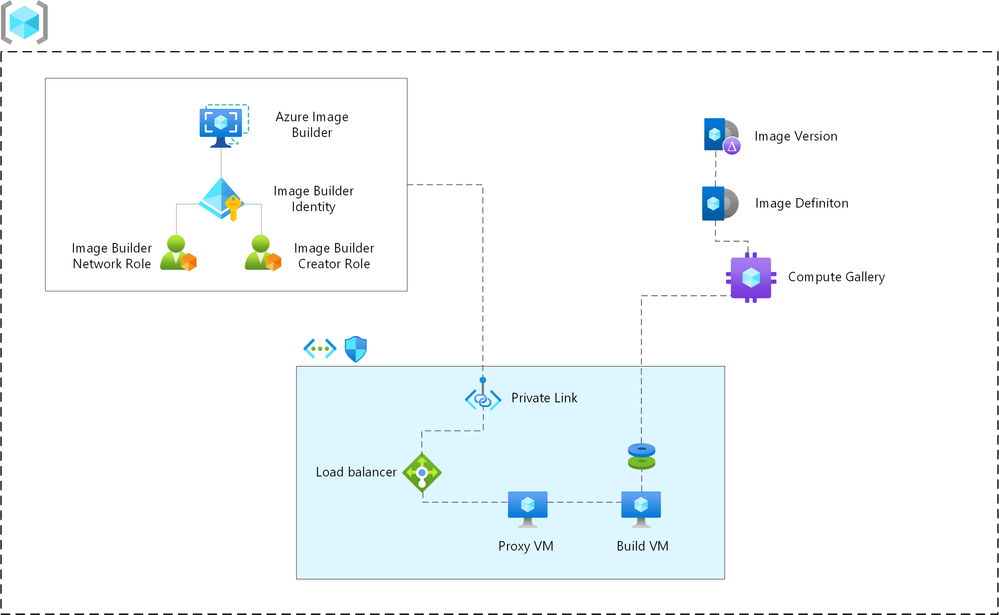 Azure Image Builder instance has a User Assigned Identity with two custom roles assigned: one for reading/joining virtual networks and one for contributing to Managed Images or Compute Gallery images (role assignment is scoped to the specific Resource Group).

The architecture uses Azure Image Builder without public IPs. This makes this procedure applicable even for organizations having security policies not allowing public IP deployments.

The images are organized in Image Definitions inside an Azure Compute Gallery. An image definition is a logical grouping of multiple versions of a specific image, meaning each Image Definition can contain multiple Image Versions

The architecture can be deployed using an Infrastructure as Code (IaC) approach.

Bicep template contains deployment instructions for all the resources described in the previous paragraph.

The source image for the build process is defined with a source object in the properties of the Azure Image Builder Bicep template:

Starting from this image, the Image Builder will apply customizations on the Build VM after the image is loaded. The customize property allows to execute different operations in the image creation process:

NVIDIA drivers and NVIDIA NCCL are skipped in this example since the image is assumed to be used only for compute nodes.

If NVIDIA drivers are needed and the Build VM is a SKU without a NVIDIA card, the kernel module load will fail at the end of the NVIDIA driver installation.

This can be overcome in two ways:

The target of the image deployment is then defined through the distribute property and allows to select the target among the three available scenarios: a managed image, a compute gallery or a VHD in a storage account

Image build process involves a real Azure VM. VmSize property allows to specify the VM SKU to be used and this will have direct impact on the price per build of the image. Other properties like OS Disk size and the subnet ID can be defined through this parameter.

Bicep template in the repository is using a Standard_D8ds_v5, while the default would be (for Gen 2 images) Standard_D4ds_v4.

Please consider that this machine selection will determine the biggest part of the cost of each image builder execution.

The deployment of Bicep template has the following prerequisites:

The following commands in the Azure CLI download the repository an deploy the resources:

The following mandatory parameters need to be specified interactively at the beginning of the deployment (or should be provided through a Bicep parameters file) :

The following optional parameters can be used to avoid deploying the VNET and NSG:

In the main.bicep there are parameters set with a default value and they can be customized for specific needs.

The target Resource group will contain the following resources after the completion of deployment: 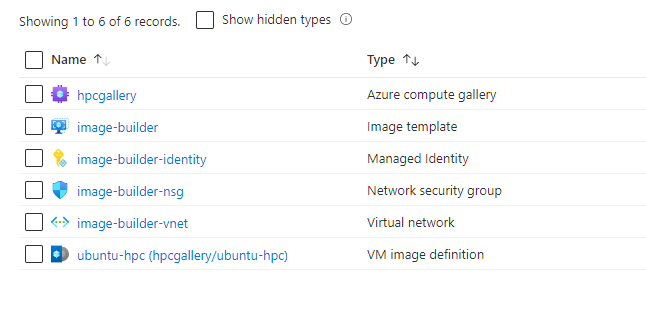 The image build process can be triggered from Azure CLI or from Azure Portal:

Another Resource Group (starting with "IT_") will be created in the Subscriptions during image build process.

The Resource Group will contain a Load Balancer, a Private Link Service, a Proxy VM and a Build VM. No Public IP will be created.

At the end of each image build process, a new Image Version for the Image Definition will be added inside the Compute Gallery:

Using the custom image in an Azure CycleCloud cluster

The image ID is required to use the newly created image inside an Azure CycleCloud cluster. The ID can be obtained through the Azure Portal looking inside the Properties of the specific Image Version.

Alternatively, it can be retrieved from Azure CLI printing the JSON definition of the Image Version:

In the case of the current deployment, it will become:

The form of the ImageID is the following:

In Azure CycleCloud images are specified using the ImageID mentioned above.

The same operation can be performed in the UI from the "Advanced Settings" of the cluster.

For example, for a Slurm cluster the ImageID can be specified checking the "Custom Image" box for the node OS specification. 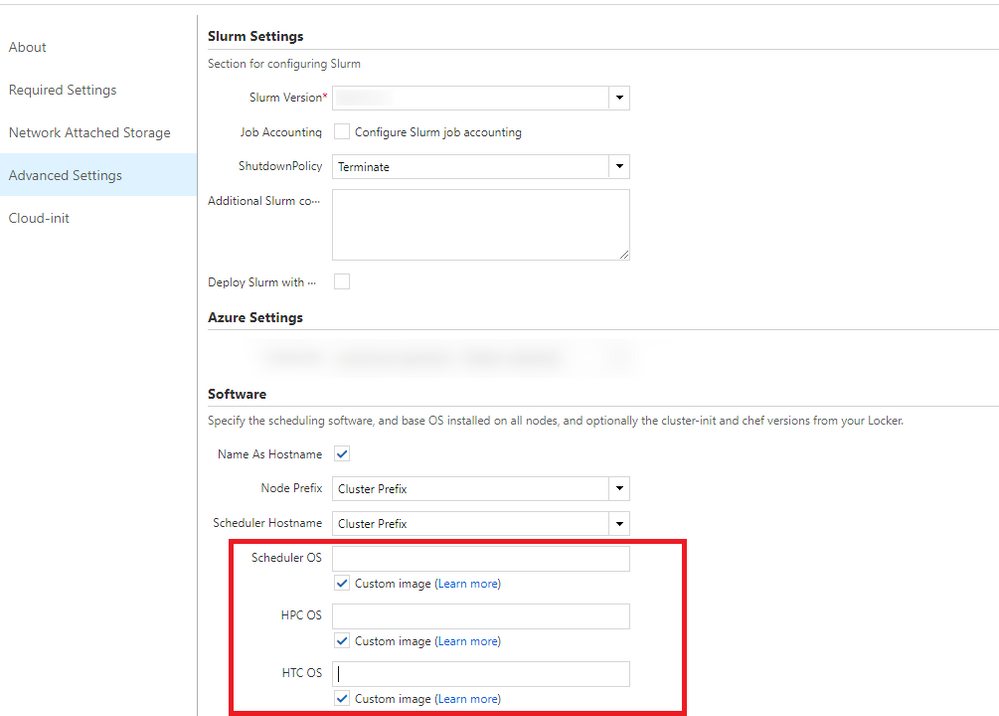 Particular attention should be reserved to the impact of an Image ID change in an Azure CycleCloud cluster. A change from the UI of the Image ID to a new version in an active cluster may lead to heterogeneous OS on the execution node array in case of autoscaling.

If it is critical for a workload to run on homogeneous OS, the Image Version should be changed only adopting proper strategies to minimize the impact.

Several options can be leveraged to manage an image version change in this case:

The Bicep template can be used to create a Continuous Delivery pipeline in GitHub using GitHub Workflow and GitHub Actions.

In this way every change to the image definition in GitHub version control system on main branch will trigger a deployment inside a target Resource Group of the update image template file and the execution of the image build process.

The configuration of a Bicep deployment through GitHub Actions involves as a first step the creation of an Application registration in Azure AD.

The following command should be executed in an Azure CLI, with login performed for the user in the target tenant (az login) and with the correct subscription set active (az account set). An easy solution is again to use Azure Cloud Shell.

This command will output a JSON file that should be copied and used in the subsequent steps.

The deployment agent will need to authenticate through the Service Principal created above to Azure.

GitHub Encrypted Secrets need to be defined in GitHub to allow the deployment agent to authenticate against Azure. Following the guide for encrypted secrets creation in a repository, three secrets should be defined:

The Application registration in AD should then be granted permissions to perform the required deployment operations.

For the purpose of Image Builder deployment, the following Custom Role can be created and assigned to the Application Service Principal scoped to the target Resource Group for the deployment:

Inside the repository there is the definition of a GitHub Workflow which realizes the deployment of the image-builder.bicep at every push on the main branch. In GitHub workflows are defined in the form of YML files. Every time the version control systems gets a new commit, the workflow is automatically executed

This workflow is triggered at every change on the main branch:

And it performs three jobs in sequence:

Thanks to this framework, every time a change is performed on the code base, the image template builder is recreated, and a new version of the image is built and saved in the Azure Compute Gallery.

Technically a user can perform changes and updates to their HPC Images directly from an IDE pushing to the GitHub repository, while GitHub Actions grant delivery of the images to the Azure Compute Gallery.

This approach can be further extended to support multiple image templates/environments:

If you've made it this far, congratulations, you already know the basics of automating your Azure HPC Images customization using Azure Image Builder and Bicep