An increasing number of customers are migrating their MySQL workloads to Azure Database for MySQL and often the related applications are read-heavy and support customers with operations in different geographical locations. Azure Database for MySQL makes it easy to architect, deploy, and manage diverse business requirements. One of the popular patterns in architecting applications is the use of read replicas for enhancing the read experience of end-users. To improve the experience even further, customers can place data as near to the users as possible using cross-region read replicas.

In addition to the performance, customers also have a critical need for business continuity through reliable Disaster Recovery (DR). Organizations can structure the behavior of their DR solution in multiple ways based on the Recovery Time Objective (RTO) and Recovery Point Objective (RPO) of the application. In Azure, commonly used DR approaches are geo-restore and cross-region read-replicas. To address this scenario, we’ll discuss an architecture pattern that provides simple DR management for applications that maintain multiple read-replicas.

A common architecture that customers use for their critical application(s) in Azure includes a primary database instance in one region together with read replicas deployed across multiple regions as shown in the following diagram. 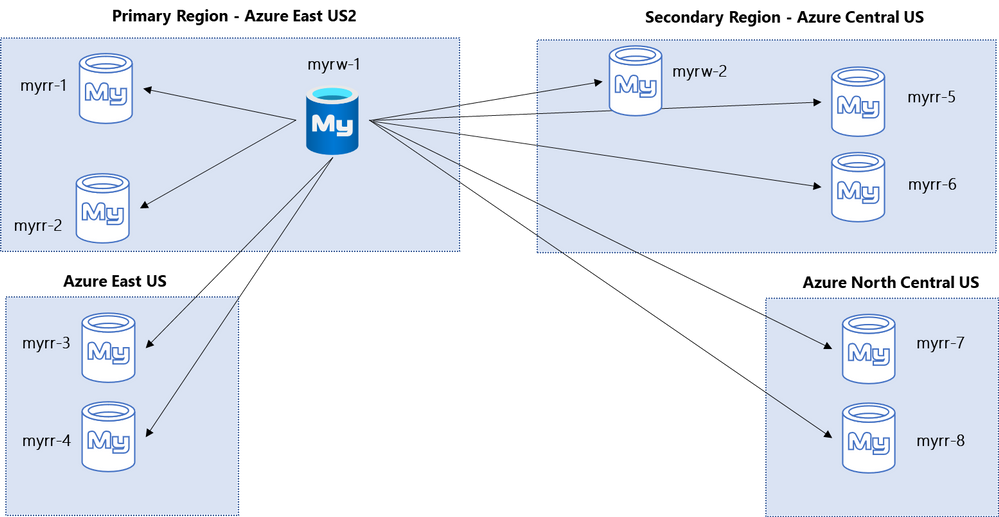 In this diagram, the primary Azure region is East US2, which hosts myrw-1 as the primary read-write instance. The Central US region hosts myrw-2, which is designated as the DR instance should an outage that exceeds the application RTO SLAs occur in the primary region. The DR instance remains in-sync asynchronously based on the Read Replica functionality in Azure Database for MySQL.

Notice that the primary instance (myrw-1) also has eight (8) additional read-replicas across multiple Azure regions, which allows for offloading read-only workloads local to the application users, as called out in the following table.

Because the other regions remain active, the customer must drop the former replicas, including those in new primary region (Central US), and instantiate new read-replicas from the new primary myrw-2 read-write instance. This ensures that read-only workloads continue to be offloaded in the respective regions. When the East US2 (original primary) region is restored, the customer must drop old primary read-write and the two (2) read-replicas in that region.

In summary, promoting a read-replica as a read-write instance in this scenario requires the following steps:

The new configuration is shown in the following diagram. 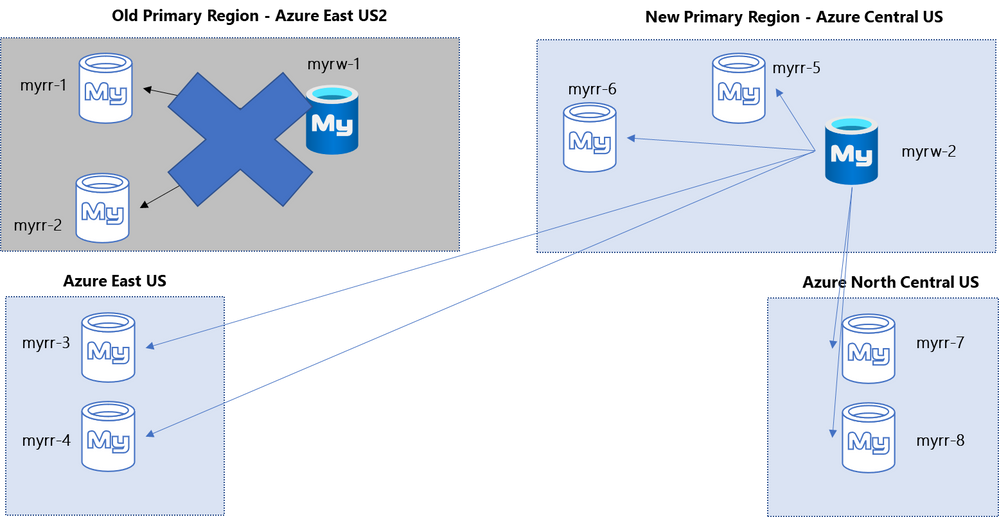 The following section proposes an alternate solution to address this. The architecture described below also caters to scenarios in which there's a need for a site-swap every 3-6 months, as it reduces the overhead of replica restructuring.

An alternative to using an architecture similar to that described above is to use native MySQL replication between the primary read-write instance (myrw-1) and the secondary read-write (myrw-2) instance. Each is an independent instance of Azure Database for MySQL with its own read replicas for offloading read-only workloads in the respective regions. This alternative architecture is shown in the following diagram. 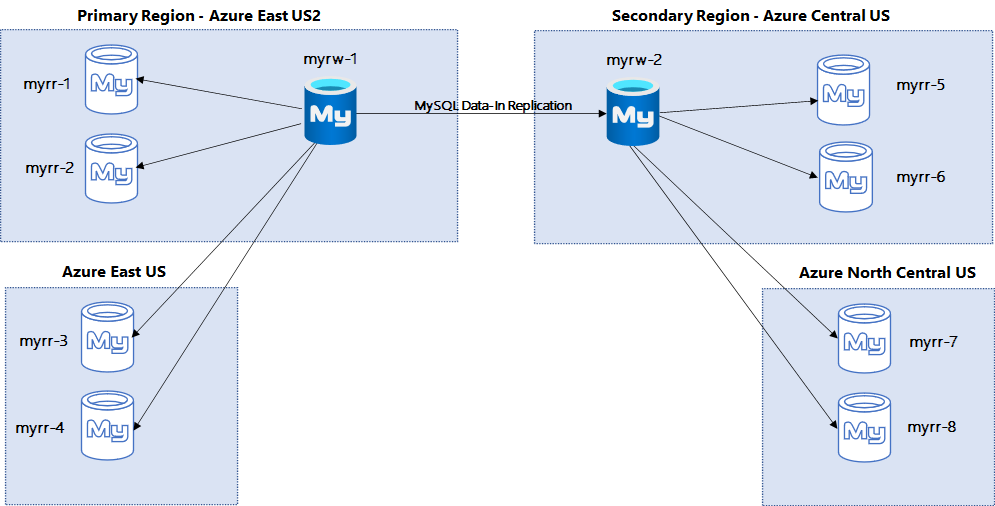 Maintaining and automating an Azure Database for MySQL instance and Replication

Azure Database for MySQL provides multiple metrics that you can use to monitor the health of your instance and any associated read-replicas. Before initiating a planned failover, be sure to check the active_connections and seconds_behind_master metrics.

As discussed, depending on your application RTO/RPO and other requirements, you can leverage geo-backups, read replica, or MySQL native replication in architecting your HADR strategy. Geo-restore and cross-region read-replicas cater to majority of the scenarios, except when there are multiple replicas spread across regions or a need for periodic site-swaps. Data-in replication helps alleviate the overhead in such cases.

If you have any feedback or questions about setting up the above architecture, please leave a comment below or email us at AskAzureDBforMySQL@service.microsoft.com.