Turn on suggestions
Auto-suggest helps you quickly narrow down your search results by suggesting possible matches as you type.
Showing results for
Show  only  | Search instead for
Did you mean:
Evaluate query performance of Azure Data Explorer
By 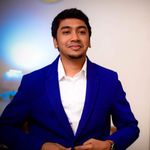 Azure Data explorer is an analytics service that is designed to perform exploratory and observational analytics on structured, semi-structured, and unstructured data with low latency in near real time. It offers intuitive querying capability using the Kusto Querying Language (KQL) to explore your data and discover patterns, identify anomalies and outliers, create statistical modelling, and more! Users are always looking for a way to fairly assess the performance of their KQL queries.

In this blog, we will provide guidance on evaluating performance through load testing your ADX cluster

and answers the following questions:

When evaluating any OLTP or OLAP engine, you want to be assured that the engine can handle the data ingestion and query load at an acceptable price point. Performance of a database or analytical store under an expected load is an important criterion to include in your evaluation. It is imperative to measure these performance metrics to drive your decision making on the following aspects:

Things to keep in mind when planning your load tests:

We have provided detailed steps to configure and guidance on load testing ADX with Grafana k6 and Apache Jmeter.

The below screenshot shows the results of a load test conducted on ADX using Grafana k6. This load test included 10 different queries that were concurrently sent to ADX for a duration of 3 mins generating a total request volume of 2144 requests, nearly 12 requests per second. P95 response time from ADX was 2.38 seconds which was well within the desired performance measure of the customer. 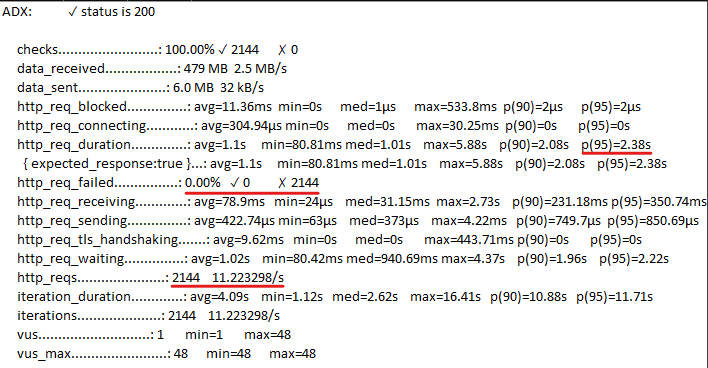 ADX is designed to sustain high loads and provide blazing fast query performance. There are many options to optimize data loads, control how extents are stored and improve query performance even further. Following best practices for the test queries will make sure they perform the best using Kusto's compute. We have elaborated use of 2 open-source tools - Grafana K6 and JMeter in our document. You can further use configured files from JMeter (extension ".jmx") to use in Azure Load Tests. For more information on this, see Create JMeter based load test in Azure.