Turn on suggestions
Auto-suggest helps you quickly narrow down your search results by suggesting possible matches as you type.
Showing results for
Show  only  | Search instead for
Did you mean:
Data bricks Notebook Deployment using YAML code
By

Purpose of this Blog:

Code Check-in into the Git repository from Databricks UI 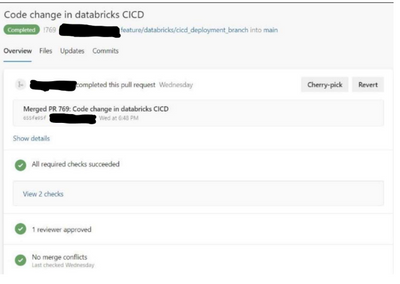 The CI pipeline builds the artifact by copying the notebooks from main branch to staging directory.

It has two tasks:

a. Run the release pipeline for the specified target environment.
This will download the previously generated Build Artifacts. It will also download secure connection strings from Azure Key Vault. Make sure your self hosted agent is configured properly as per Self-Hosted Agent.Then it will deploy notebooks to your Target Azure Databricks Workspace.

The code below shows how to run your release agent on a specific self hosted agent: Take note of the pool and demands configuration.

We have two steps for the deployment: