Welcome back!  If you're just returning from a weekend, hopefully you got some time to yourself to relax.  It's Day Eleven of our Windows Server 2008 Series.  Today's topic - the new WSD Port Monitor.

Now that we know what the WSD Port Monitor does, let's look at the communications mechanism used by WSD.  When a WSD-based printer is connected to a network, it sends out an unsolicited "Hello" message to advertise its presence.  Computers running Windows Vista or Windows Server 2008 listen for these advertisements and add the printer to their list of available network printer resources.  When a WSD-based device is gracefully removed from the network it sends another message (a "Bye" message) to advertise that it is no longer available.  In addition, Windows Vista and Windows Server 2008 machines can discover WSD-based printers by using a "Probe" message when searching for printers via Network Discovery or the Add Printer Wizard.  A typical WSD communication sequence is shown below: 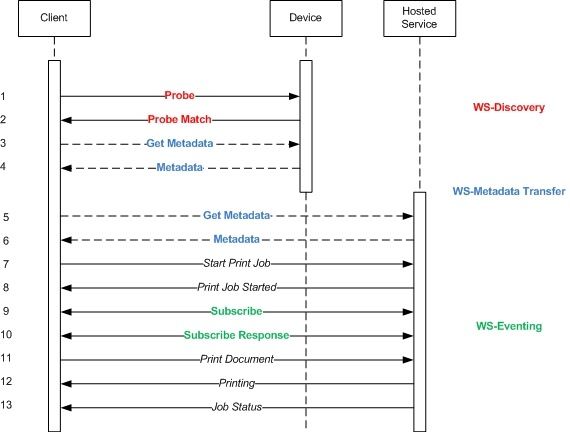 Let's examine each piece of this sequence:

Hello, Bye, Probe, Resolve and Get messages are all generated without network solicitation.  These messages are used to announce device state, issue a search request, or obtain metadata.  ProbeMatches, ResolveMatches, and GetResponse messages are generated in response to Probe, Resolve and Get messages.  Hello, Bye, Resolve and ResolveMatches messages are sent by UDP multicast to port 3702.  Get and GetResponse metadata messages occur over HTTP (TCP port 5357) or HTTPS (TCP port 5358).  Probe and ProbeMatches messages are sent over UDP (port 3702) unless they are "directed" messages.  A "directed" message is one where the WSD device name is known and accessed directly by name.  For directed messages, the Probe and ProbeMatches messages use the same ports as the Get and GetResponse metadata messages.  Obviously, to allow WSD network discovery, the Network Discovery firewall exceptions for the listed ports must be enabled in the Windows Firewall.  Finally, you can disable Multicast by setting the IGMPLevel value to 0 in the following registry key: HKLM\SYSTEM\CurrentControlSet\Services\Tcpip\Parameters .

And that brings Day Eleven to a close.  Tomorrow we'll be looking at Printer Driver Packages.  Until next time ...