Turn on suggestions
Auto-suggest helps you quickly narrow down your search results by suggesting possible matches as you type.
Showing results for
Show  only  | Search instead for
Did you mean:
WS2008: Remote Desktop Connection Architecture
By

Day Nineteen.  There are only eight more days to go till the big day.  The excitement is definitely building.  Today's topic for discussion - Remote Desktop Connection Architecture.

The Remote Desktop Connection 6.1 client is comprised of the following four functional layers containing individual objects that interact through a common set of core components.  The function layers that make up RDC Architecture are:

The following diagram illustrates the relationship between the components of the RDC client application - we will go over each of them briefly: 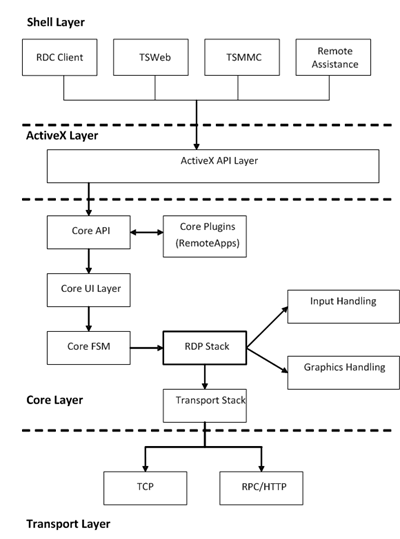 The ActiveX layer provides secure interfaces to enable the different types of shells in the Shell layer.  The ActiveX control that is used for Remote Desktop Web Access is now included with the Remote Desktop Connection application.  In order for the Terminal Services ActiveX control to run properly, you must ensure that the ActiveX control is enabled in Internet Explorer.  The Terminal Services ActiveX Client control is implemented in mstscax.dll in the RDC 6.x client using the following Class ID: 4eb89ff4-7f78-4a0f-8b8d-2bf02e94e4b2.

The Core layer is the main "engine" for the RDC client.  It provides all of the protocol-related functionality and has the following functional layers:

The Transport Layer provides the connection functionality for the client.  A TCP-based transport and an RPC / HTTPS (proxy) based transport are provided in the RDC 6.x application.

And that brings us to the end of this post.  Tomorrow is Day Twenty, and we'll take a look at some RDC Enhancements.  Until next time ...