Turn on suggestions
Auto-suggest helps you quickly narrow down your search results by suggesting possible matches as you type.
Showing results for
Show  only  | Search instead for
Did you mean:
WS2008: Network Level Authentication and Encryption
By

There are specific requirements to use Network Level Authentication: 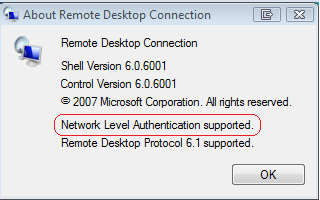 These encryption levels are stored in the MinEncryptionLevel value in the following registry key: HKLM\SYSTEM\CurrentControlSet\Control\TerminalServer\WinStations\RDP-Tcp .  There are four possible values for MinEncryptionLevel that correspond to the settings in the table above:

And with that we come to the end of this post.  In tomorrow's post, we'll take a look at Terminal Server printing.  Until next time ...