Turn on suggestions
Auto-suggest helps you quickly narrow down your search results by suggesting possible matches as you type.
Showing results for
Show  only  | Search instead for
Did you mean:
Windows 7 / Windows Server 2008 R2: Console Host
By

Happy Monday everyone.  It’s Day Five of our Launch Series.  Today, we’re going to cover a new feature in Windows 7 / Windows Server 2008 R2 – Console Host (ConHost.exe).  A good number of companies and individuals out there still run “console” applications.  A console application is one that does not have a GUI, but instead relies on text input and output via a command prompt window of some sort.  Windows still contains a few classic examples of console applications; Cmd.exe, NSLookup.exe, and TelNet.exe come to mind as shown below: 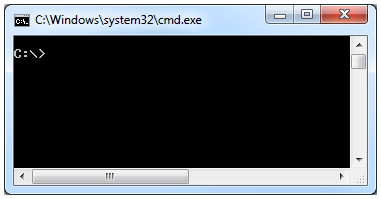 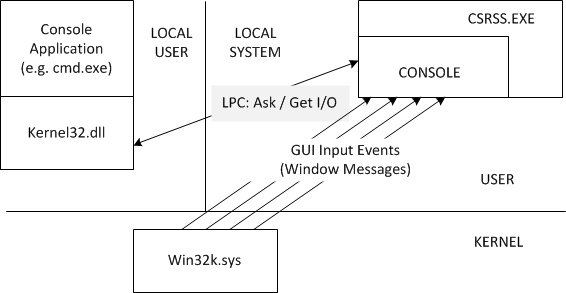 The problem with this was that even if an application ran in the context of a regular user’s account, CSRSS.EXE runs under the Local System account.  So it was possible under certain circumstances for malware to exploit weaknesses in an application in order to execute code under the more privileged Local System account in CSRSS.EXE.  This kind of exploit is known as a “shatter attack” and is discussed in more detail on Wikipedia .

This exposure was addressed in Windows 7 and Windows Server 2008 R2 by running the console messaging code in the context of a new process, ConHost.exe. ConHost (Console Host) runs in the same security context as its associated console application.  Instead of issuing an LPC request to CSRSS for message-handling, the request goes to ConHost.  As a result, any attempts to exploit the message-handing code of the application will not result in an automatic escalation of privileges.  Below is a depiction of the new mechanism for console messaging with console messaging moved from CSRSS.EXE to CONHOST.EXE: 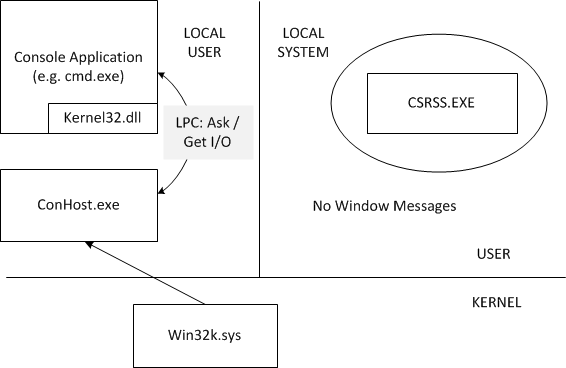 ConHost represents a permanent change in the way that console application I/O is handled.  There is no registry key or group policy setting that can force Windows to revert back to “legacy mode” console behavior.  So you know what I’m going to say… TEST your application(s) on Windows 7 and Window Server 2008 R2 before deploying the new operating systems.  And, keep in mind that some applications might have a GUI for most functions but still use console interfaces for batch or other functions.  So, FULLY TEST your applications.

If an application does not function as expected on Windows 7, first test basic ConHost functionality by running some of the built-in Windows console applications we mentioned earlier.  If these work, then it would seem that ConHost itself doesn’t have any issues.  Be sure you are running the application under a user account that has the required user rights and permissions. As a test run it as an administrator. You may want to simultaneously run Process Monitor to catch any file or registry permissions issues.

If the application still fails, the next step should be to contact the application vendor or developer(s).  My intuition and experience tell me that you are laughing at me right now. Let me guess… The guy who wrote the app and used to work out of his garage has moved on to bigger and better things, or the vendor no longer supports that version.  If you find yourself in that sort of situation, upgrading or replacing the application is probably going to be your best long-term solution.  In the short-term, you may want to consult our Knowledge Base or contact Microsoft Support or search the web to see if there are any known issues with your specific application.  Keep in mind that we do not support 3 rd -party applications.  If the application was written internally by your application developers, Microsoft Developer Support may be able to assist.

You can also use the “Analyze Wait Chain” feature of Resource Monitor to determine on which ConHost.exe process the application process is waiting as shown below: 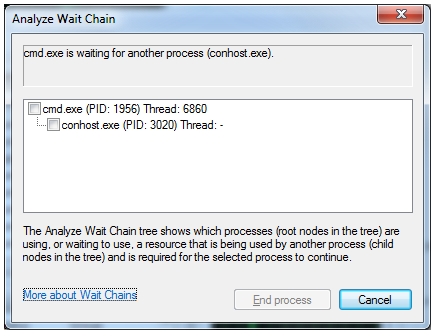 This is one of those changes that takes a little getting used to.  As I’ve said before thoroughly test your applications as a part of your deployment plan.  Well – we’ve reached the end of Day Five.  Guess what – I’m not on the hook for tomorrow’s post!  Tomorrow we’ll start to take a look at Printing and Document Services on Windows 7 and Windows Server 2008 R2.  Dane Smart is writing tomorrow’s post on What’s New in Printing and Printing Performance Enhancements.