A few weeks ago we posted our initial walkthrough on Windows Server 2008 Server Core - getting the OS installed and joining the server to a domain.  Today we're going to continue getting our Server Core implementation and turn the machine into a functional Print Server.  It's been a while since I rebuilt this machine, so the first thing I am going to do is list the available Server Roles.  You can do this with the oclist.exe command as shown below: 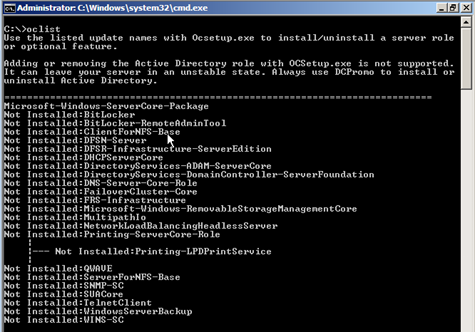 As we can see, there are no roles installed.  To install the Printing Role, we use the following command: ocsetup Printing-ServerCore-Role .  Once the installation of the role is completed, we are prompted to reboot the server.  There are server roles that are dependent on the Print Server role, such as the LPD Print Server Role (as shown above).  However, when the Print Server Role is installed, the LPD Print Server role is not installed automatically.  Once the server is rebooted, I need to make sure that the firewall on the server has the appropriate ports open to enable File and Printer Sharing.  To open the File & Printer Sharing ports, we use the netsh command: netsh firewall set service fileandprint enable .  So now that the basic prep work is completed, it's time to create and configure the printers.


There are two ways to manage a Server Core installation configured as a Print Server.  At the console itself, you can use a combination of commands and scripts.  All of the scripts are located in the Windows\System32\Printing_Admin_Scripts\en-US folder.  The following commands can be used locally:


To get help about the syntax for any of these commands or scripts, use the /? switch. 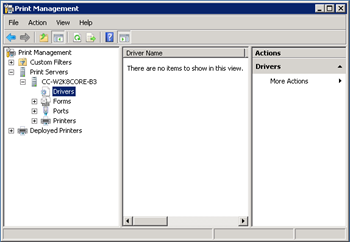 The first thing we are going to do is install a driver on the server in preparation for creating a printer.  Right-click on the Drivers option and select Add Driver to launch the Driver Installation Wizard.  As you can see, even though my Server Core machine is running a 32-bit (x86) Operating System, I have the option to install x64 drivers.  If you select the option to install x64 drivers on an x86 server, you need to ensure that you have either the OS installation media for the x64 system (for inbox drivers) or the x64 driver installation package (for OEM drivers).  In this instance, I am only going to install x86 drivers initially. 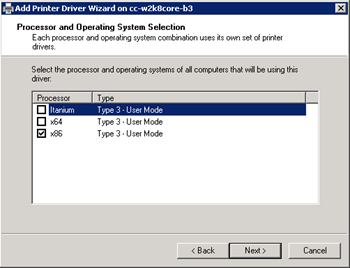 After selecting the HP Color LaserJet 4550 driver from the list of inbox drivers, the printer driver files are copied to the correct folder and the driver is installed: 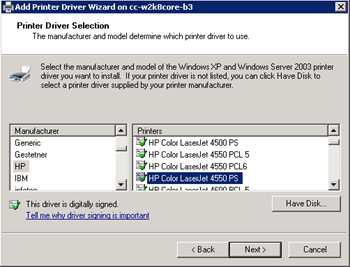 I can confirm the driver installation on the Server Core machine using the prndrvr.vbs script with the -l option: 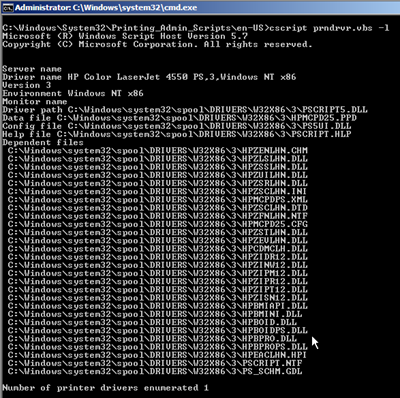 Now I have to create the printer queue on the server.  This particular printer is already on the network, so I just need to add a TCP/IP port for it. 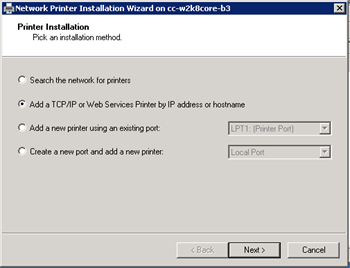 I modified the Port Name so that I can easily tell exactly where this printer is located by looking at the port itself. 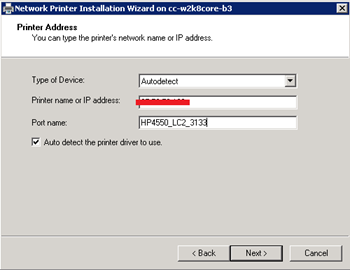 Since I know I already have the correct driver installed, I am going to select the HP Color Laserjet 4550 PS driver. 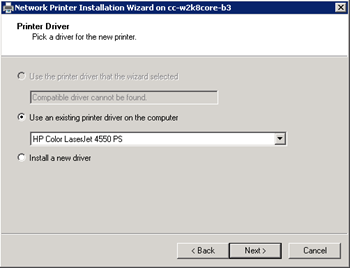 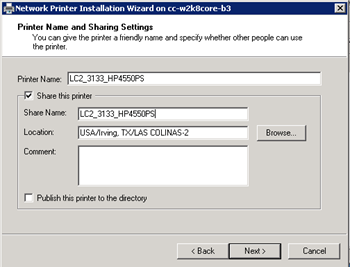 ... that's it!  The printer has been successfully installed.  If I check the shared printers on the server from a different machine, the printer is correctly shared out and accessible. 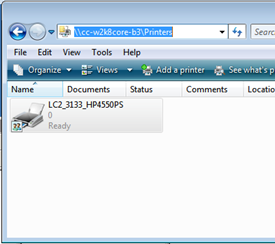 However, if you recall, I only installed the x86 drivers.  Now I want to go back and add drivers for the Windows XP x64 clients that need to use this printer.  So, I can repeat the same process of adding a driver - I just need to ensure that I provide the installation media for the OS or the driver package.  Once the driver itself is installed, it updates the printer automatically as shown below: 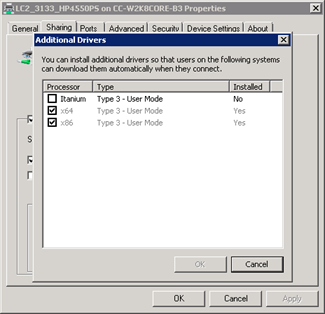