Turn on suggestions
Auto-suggest helps you quickly narrow down your search results by suggesting possible matches as you type.
Showing results for
Show  only  | Search instead for
Did you mean:
Understanding Crash Dump Files
By

At the end of 2007 we talked about Bugchecks and why they happen .  Today we're going to talk about the Crash Dump files themselves - the different types of dumps, how the dumps themselves are generated and why you will need a correctly sized page file.  So, let's get started ...

By default, all Windows systems are configured to attempt to capture information about the state of the operating system in the event of a system crash.  Remember that we are talking about a total system failure here, not an individual application failure.  The settings for the dump files are configured using the System tool in Control Panel.  Within this tool, select System Properties - on the Advanced tab there is a section for Startup and Recovery.  Clicking on the Settings button brings up the dump file options as shown below.  There are three different types of dump that can be captured when a system crashes: 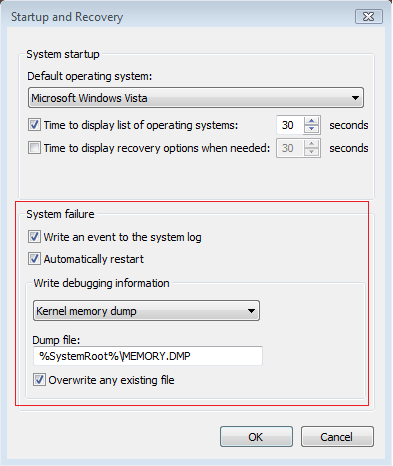 Complete Memory Dump : This contains the entire contents of the physical memory at the time of the crash.  This type of dump will require that there is a page file at least the size of physical memory plus 1MB (for the header).  Because of the page file requirement, this is an uncommon setting especially for systems with large amounts of RAM.  Windows NT4 only supported a Complete Memory Dump.  Also, this is the default setting on Windows Server systems.

Kernel Memory Dump : A kernel dump contains only the kernel-mode read / write pages present in physical memory at the time of the crash.  Since this is a kernel-mode only dump, there are no pages belonging to user-mode processes.  However, it is unlikely that the user-mode process pages would be required since a system crash (bugcheck) is usually caused by kernel-mode code.  The list of running processes, state of the current thread and list of loaded drivers are stored in nonpaged memory that saves in a kernel memory dump.  The size of a kernel memory dump will vary based on the amount of kernel-mode memory allocated by the Operating System and the drivers that are present on the system.

Small Memory Dump : A small memory (aka Mini-dump) is a 64KB dump (128KB on 64-bit systems) that contains the stop code, parameters, list of loaded device drivers, information about the current process and thread, and the kernel stack for the thread that caused the crash.

Something to note here - although the need for a complete memory dump is rare when dealing with bugchecks, a complete memory dump is almost always required for manually generated crash dumps used to diagnose soft hangs on a system (for more information regarding the difference between a soft and hard hang, please see our Troubleshooting Server Hangs - Part One ).  This is because when looking at soft hangs we will need to look at user-mode processes, deadlocks etc.  However, regardless of which type of dump you are capturing, there must be a correctly sized page file on the boot volume.  For complete dumps, as stated above, this page file will need to be Physical RAM + 1MB.

If you are concerned about setting the maximum page file size too low to be able to capture a kernel dump, the only way to get a better estimate would be to force a manual crash using the CrashOnCtrlScroll method described in Microsoft KB Article 244139 .  Once the system has rebooted, check to see if a kernel dump was generated and check the size.  The other alternative (for 32-bit systems) would be to set the page file on the boot volume equal to 2GB + 1MB.  This is because the maximum kernel-mode address space available on 32-bit systems is 2GB.

In addition to correctly sizing the page file, you also need to ensure that you have sufficient free disk space for the actual dump file itself to be written.  Unlike the page file used to capture the dump, the dump file itself can be written to a different local volume by changing the location in the Dump File field.  If there is a need to maintain multiple dumps of an issue, then you should uncheck the "Overwrite any existing file" box as well.  However, please remember that this may put a strain on free disk space over time.

Let's take a quick moment and talk about how the dump files themselves are generated.  When a system boots up, it checks the crash dump options in the HKLM\System\CurrentControlSet\Control\CrashControl registry key.  All of the settings available in the GUI can be modified via the registry as shown below:

Returning to the subject of how the dump file itself is generated, If a dump is configured, the system makes a copy of the disk miniport driver used to write to the boot volume in memory and prepends the driver name with "dump_".  The system also checksums all of the components involved with writing a crash dump, (including the copied disk miniport driver), the I/O manager functions that write the dump and the map of where the boot volume's page file is on the disk.  This checksum is saved.  When the KeBugCheck function executes it checksums these components again and compares this checksum to the one created at boot.  If these checksums do not match, no dump file is written (because of the risk of corrupting the disk).  If the checksum matches, the dump information is written directly to the sectors on disk occupied by the page file.  The file system driver is completely bypassed - because it may be corrupted or be the cause of the crash.  When SMSS.EXE enables paging during the boot process, the system examines the boot volume's page file to see if there is a crash dump present.  If one exists, then this part of the page file is protected.  This makes all (or part) of the boot volume's page file unusable during the early part of the boot process.  This may result in notifications that the system is low on virtual memory - a temporary condition.  Later in the boot process, WINLOGON.EXE calls the SAVEDUMP.EXE process to extract the dump from the page file and copy it to the final location that is specified in the Dump File field.

And that brings us to the end of this post.  Until next time ...