Turn on suggestions
Auto-suggest helps you quickly narrow down your search results by suggesting possible matches as you type.
Showing results for
Show  only  | Search instead for
Did you mean:
The Program Compatibility Assistant - Part One
By

The Program Compatibility Assistant - Part One

It's been a while since we posted something on Application Compatibility and Windows Vista.  A question I get from quite a few customers when discussing application compatibility is, "What is the Program Compatibility Assistant used for?"  Today we are going to cover some common installation and runtime scenarios.

So let's take a look at the two most common scenarios we mentioned above where the PCA can help to alleviate the issue:

One possible reason that an application may fail to install on Windows Vista is due to the version checking logic built into the application's installer.  For example, if an application does a version check and fails with an error message indicating that "the current version of Windows is not supported", then the problem could be that the installer is checking for a specific OS Version using either the GetVersion or GetVersionEx API's.  For example, if an installer is hard-coded to look for the OS Major Version number to equal "5", then on a Windows Vista system, the installer would fail.  This is because the OS Major Version number of Windows Vista (and Windows Server 2008) is "6" as shown below: 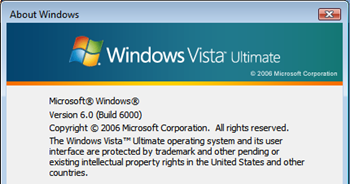 In this instance, if we allow PCA to reinstall the program using the recommended settings, then PCA would apply the XPVersionLie fix which tells the installer that the OS Major Version is "5" when the GetVersion or GetVersionEx API's are called.

There are three different scenarios where PCA will detect failures due to UAC:

There are a couple of other common PCA scenarios to consider, Program failures due to deprecated or obsolete Windows components and Detecting unsigned drivers on a 64-bit platform.  In the first scenario, PCA mitigates the impact on programs due to deprecated components in Windows Vista and Windows Server 2008.  For example, if a program is trying to access a DLL or COM object that has been deprecated, PCA will provide a UI when the program terminates to advise the user and provide options to check online for a solution.

Windows Vista and Windows Server 2008 do not support unsigned drivers on a 64-bit platform.  If an unsigned driver is installed, the driver will not load. Following a reboot, if the driver is a boot-time driver the system will not boot .  This is important to keep in mind.  The device or program trying to use the driver may experience failures which may also result in a system crash.  However, PCA mitigates against this by monitoring driver installation, and notifies the user if an unsigned driver is installed.  In the event that the driver is a boot-time driver, PCA will disable the driver, thus guarding against a no-boot situation.  PCA detects this scenario first by monitoring changes to the KEY_LOCAL_MACHINE\SYSTEM\CurrentControlSet\Services registry key for addition of new drivers into the system.  Then, based on the location of driver from the registry, each new driver installed will be checked for a valid digital signature.  If the driver does not have a valid signature, PCA dialog will be displayed.

And that brings us to the end of Part One of our overview of the Program Compatibility Assistant.  Part Two will cover Application Hard Blocks and Soft Blocks as well as Managing PCA Settings.