Turn on suggestions
Auto-suggest helps you quickly narrow down your search results by suggesting possible matches as you type.
Showing results for
Show  only  | Search instead for
Did you mean:
Remote Desktop Licensing Service Stopping
By


Hello AskPerf! My name is Matt Graham and I'll be discussing an issue that you may see on your RDS Licensing Server.


SCENARIO You have both a 2008 R2 and an 2012 or 2012 R2 Licensing server in your RDS environment.  When you look under services.msc, you notice that the Remote Desktop Licensing service is stopped on the 2012 / 2012 R2 server.  You try to start it again, but after a short period of time (30 seconds to a few minutes) it stops on its own again.  In fact, every time you try to start the service, it starts for a short time and then stops on its own.

Alternatively, you may see this service crash.


CONSIDERATION #1 We have seen at least one case where the 2012 License Manager Service still did not start even after removing the 2008 R2 License server.  In this case, the licensing server database had become corrupt.  If this happens, you can rebuild the database using the "Manage Licenses" wizard.


WARNING If you do this, you will have to re-install your licenses after the rebuild. Be sure you have your licensing information. 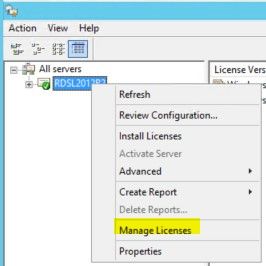 3.  After this, you will need to have your Retail CAL pack or your EA information in order to reinstall your licenses.


CONSIDERATION #2 In one case, a customer had to rename the "C:\Windows\System32\Lserver" folder, uninstall the RDS roles, reboot, and reinstall the RDS Licensing role in order to get the service to start again.  This should effectively do the same thing as rebuilding the license database, but I mention it because it was successful in at least one case.


Finally, when you decommission your old 2008 R2 server, be sure to think through what that will entail for your session hosts.  You may need to take inventory of your session hosts and ensure that they are pointed to your 2012 / 2012 R2 license server if they aren't already pointed to it.