We have several Enterprise customers who have deployed Windows 8 and 8.1 in their environments. However, after joining the machine to the domain, we discovered that numerous Windows Modern Apps could not display the contents correctly. For example, if we launched the Weather App, we saw the message “This page failed to load”: 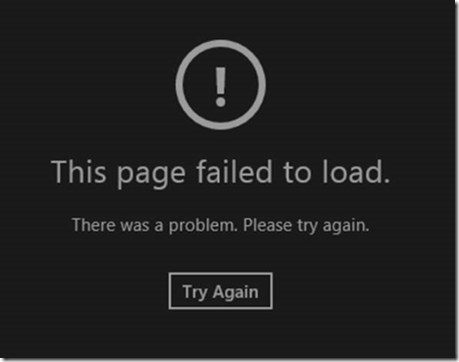 On the surface, this looks like a network connectivity issue, however other network related programs ran fine. A Network Trace was captured, but we could not find any dropped packets.


After further troubleshooting, we found that the same Windows 8/8.1 machines worked if they were outside of their corporate network. This gave us a clue that something inside their environment is causing the issue. In one step, we noticed that if the Firewall was disabled, the Modern App ran fine. Obviously turning the firewall off is not recommended.


After lots of additional troubleshooting steps were done, we discovered that the Akamai Internet Caching Servers had a hand in this issue. The Windows Firewall Service blocked the traffic to Akamai devices, but why would it do this? Why would a Modern App have network connectivity issues to Akamai devices?


To answer this question, first we need understand what Akamai Internet Caching Server is. It is a widely used content management solution worldwide. The main purpose of it is to save the web contents (mostly static) as the cache on the server. So next time a client machine tries to reach the same website, it actually reaches the cache on the local Akamai Server instead of taking longer time to reach the real contents on the remote web server. By doing this, we save a lot network traffic and speed up the contents delivery. So, the Akamai Internet Caching Server plays a similar role as an Internet Proxy Server, but from a web content management perspective. It basically delivers the contents to Windows clients on behalf of real/live web server.


OK, so now that we understand Akamai’s role, let’s switch back to the Windows Modern App. In Windows, there is an important feature called Windows Store App Network Isolation. Modern Apps are network isolated depending on the network capabilities the app developer chooses. An enterprise private network is protected and only available to those apps that declare the privateNetworkClientServer capability in the app manifest. There are very few Modern Apps in the Microsoft store that work on a private network. Even though users can very easily download and install any kind of app, the app cannot talk to the enterprise network because the app can only talk to the public network. In most cases, what is a private / public internet network is automatically detected, which means the Modern App knows to reach public internet even when a Windows 8/8.1 machine is running in a corporate (private) environment. But what happens if we bring the Akamai Internet Caching Server into this scene? Instead of letting Modern App reach the real contents on the remote web server via public internet, the Modern App is forced to talk to the Akamai device which is on the corporate (private) network. Remember, very few Modern Apps are approved to work on a private network ONLY. If the apps try to reach private network, the firewall will block it. Here is a way you can check to see if your machine is hitting this problem:


4. Look at one of these events and you should find this similar information. Note: 192.168.0.10 is Akamai server’s address in this example.


The Windows Filtering Platform has blocked a packet.

Wwahost.exe is the Modern App process. As you can see, WFP blocked this traffic with Filter ID 71620 because it tried to reach a private IP address. This filter is called Block Outbound Default Rule. If you want to know how I can tell this filter’s name, you can do netsh.exe wfp capture start via elevated command prompt when you reproduce the issue. This will generate a wfpdiag.cab file and in this cab you can see wfpdiag.xml. Now open this xml file to correlate the filter name and ID.


So, at this point, we now know that Akamai is filtering the cached Internet traffic. That internet cache however is hosted in the private network. Akamai internet cache is essentially the internet network and needs to be deployed as such.


There are several solutions. But they can be essentially classified in two types:


Type 1: Either the Akamai servers must be deployed outside of the private network, or


Type 2: The Akamai servers must be declared explicitly as proxies who live in the private network


Microsoft’s recommendation is Type 1 as the enterprise cannot control much of what the Akamai devices do. So, putting the device just outside of the corporate firewall on a different address space or outside of enterprise subnet would appear to be a better solution. However, if this requires a fundamental change of your infrastructure, the Type 2 solution can also be guaranteed to work.


Below we cover some solutions of how the Akamai Servers can be deployed.


Solution 1 – Akamai servers on their own IP space.


Akamai servers are deployed outside of the DMZ and they are given an address space different from the one provided to the company. In this scenario the ISP might participate or even the company can simply not provision the subnet given to Akamai anywhere else.


Solution 2 – Akamai servers are outside of AD sites and Subnets.


Akamai servers are given an IP address space that is not one included in the AD sites and Subnets configuration of active directory. In theory it should be a security issue that an external device not belonging to the corporation is included in the AD sites and subnets as it providing it with access that the enterprise does not want to provide. Hence this approach is not only an appropriate deployment of network isolation but an appropriate deployment of AD in general and a good tightening of the network.


Here is the example to implement this solution:


The Network Isolation Internet Proxy Servers for Apps group policy allows administrators to define proxy server(s) that will route traffic that is classified as internal to the appropriate resources.


Note Internet Proxy Servers for Apps group policy defines a proxy that will only be used to route traffic that is classified as internal.  It does not define a general purpose proxy server for use by Windows Store Applications. For details on configuring proxy servers in Windows 8 please see, http://support.microsoft.com/kb/2777643


Here is the example to implement this solution:


For more information about the feature of Network Isolation of Windows Modern Apps, please refer to:


How to set network capabilities